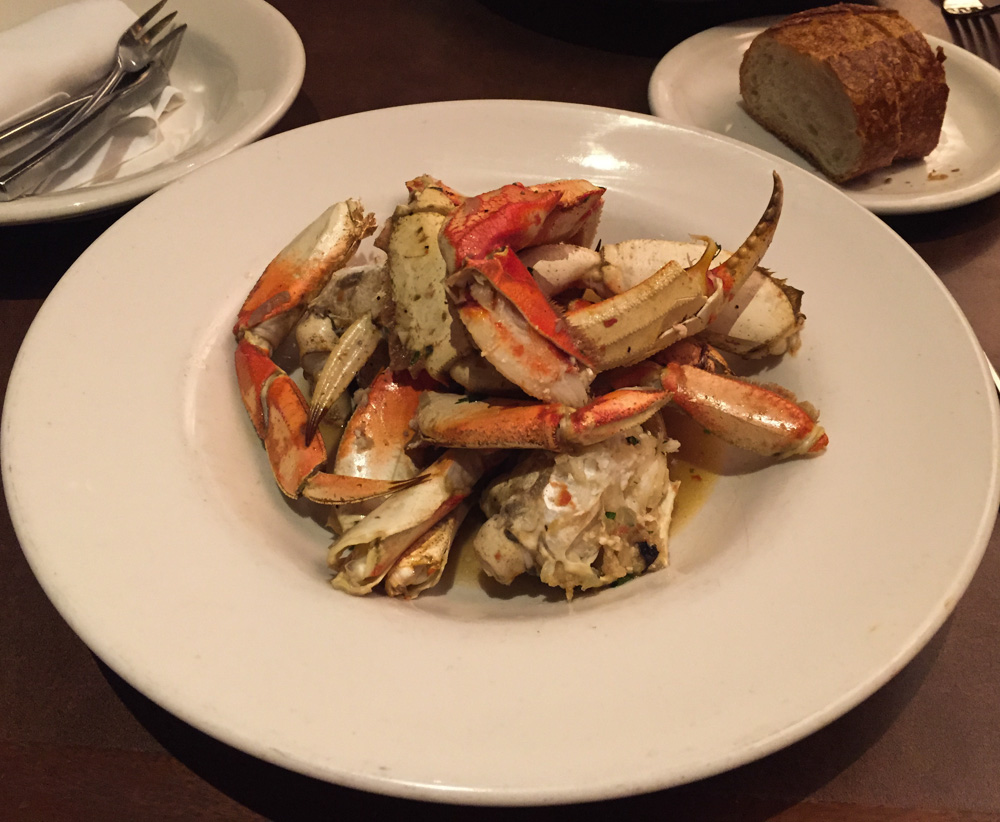 Capurro’s Restaurant Review – Most of the restaurants around Fisherman’s Wharf have a bad rap. For years, locals have shunned the dining options in this touristy part of town as overpriced and overrated. These eateries have remained popular among tourists for their location and local seafood offerings, and many are long-time family-run operations, so I like to give them a chance.

Capurro’s Restaurant has been around since 1946 and specializes in seafood with an Italian flair. The menu features typical San Francisco seafood dishes, like Dungeness crab, cioppino, clam chowder, and oysters, along with a selection of pastas, pizzas and sandwiches on sourdough. Capurro’s has its location going for it, hauling in a steady stream of out-of-towners along with its daily catch.

Capurro’s Restaurant enjoys a prime location at the end of Jefferson Street, and is one of the last buildings before Hyde Street Pier. It’s a ways away from the heaviest trafficked part of Fisherman’s Wharf, but still close the tourist haunts, like Ghirardelli Square and the cable car turnaround. The restaurant is close to the water, but doesn’t offer those great Bay views like some of the other restaurants right on the wharf. Street parking is tough to come by, but Capurro’s is one of very few restaurants to have its own private parking lot in the back. Another good option is to ride in on a cable car or the historic F Market and Wharves streetcar. 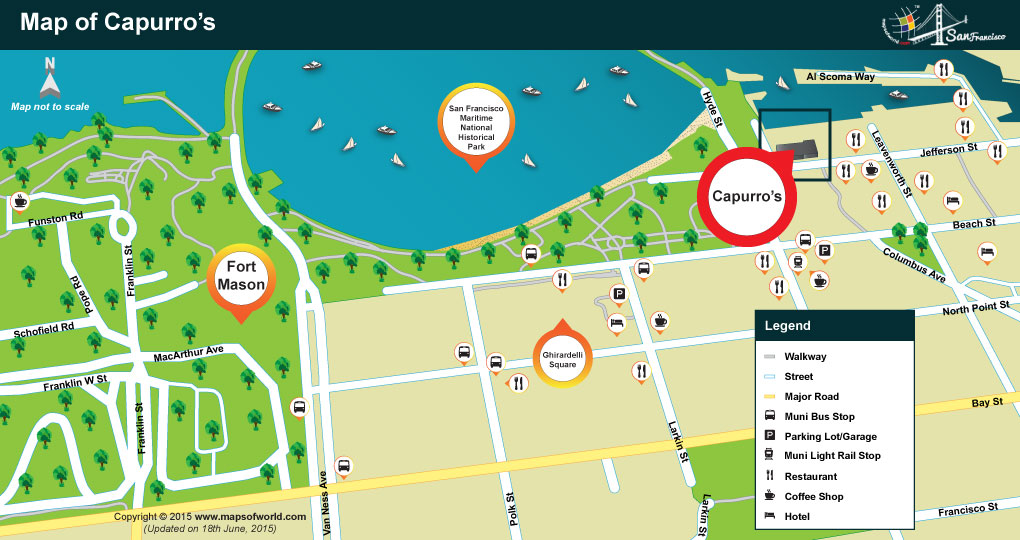 A life-sized wooden ship captain greets customers at the front door. Capurro’s has the cliché Fisherman’s Wharf seafood restaurant décor: fish hanging on the wall, and fishing gear like nets and buoys. The walls are covered in framed photos, mostly in black and white, from the restaurant’s long history.

The décor of Capurro’s is old fashioned, and not necessarily in a bad way. It seems clean, not dingy. There’s warm, dim lighting, dark wood and leather booths. The kitchen is open to the dining area, so you can watch the chefs at work. There’s also outdoor seating in the front, along the busy Jefferson Street, for some prime tourist-watching.

We arrived a few minutes early for our reservation, and the restaurant was not busy (on a weeknight). The host was not particularly welcoming and despite the reservation (and the empty tables), it still took him a little while to seat us, like they weren’t expecting us. Making the reservation was a chore, and the person I spoke to was actually rude and condescending.

Our actual server was quite friendly, however, and also efficient. Each of the courses didn’t take long to come out. The manager (or owner?) came out before we left to ask us how everything was, which is always appreciated.

The food prices at Capurro’s Restaurant are about average for the area (which means slightly overpriced for what you get). Clam chowder in a bread bowl costs about $10, which is on par with other restaurants along Fisherman’s Wharf. A whole crab runs $35, while the pizza and pastas are all under $20.

Capurro’s menu features mainly seafood dishes, as well as some options for steak, chicken, and vegetarian meals. Intriguing menu items include the clam and garlic pizza and the black mussels and Italian sausage pizza, lobster ravioli, and some unique oyster preparations.

I went for the crab meal, which came with a few options for sides: clam chowder, pasta, or salad. The pasta sounded basic, like the kind I made for myself when I was in college, marinara on noodles. I chose the clam chowder, and it was the best thing I had at Capurro’s, and probably one of the best I’ve had anywhere. It was white chowder and had a slightly different flavor from the other chowders I’ve sampled along the wharf, which may have been some herbs.

The crab itself left me disappointed. For a whole crab, it was tiny. A half of a crab has filled me up (and then some) elsewhere, and I polished this one off (along with a cup of chowder and dessert) easily. And then there was the flavor: though we had the option between the woodstone roasted crab in white wine garlic sauce and the chilled crab in garlic and herb vinaigrette. I chose the woodstone crab because it was hot and sounded more flavorful, but the flavors were so weak. There was hardly any sauce to dip the crab in for flavor. 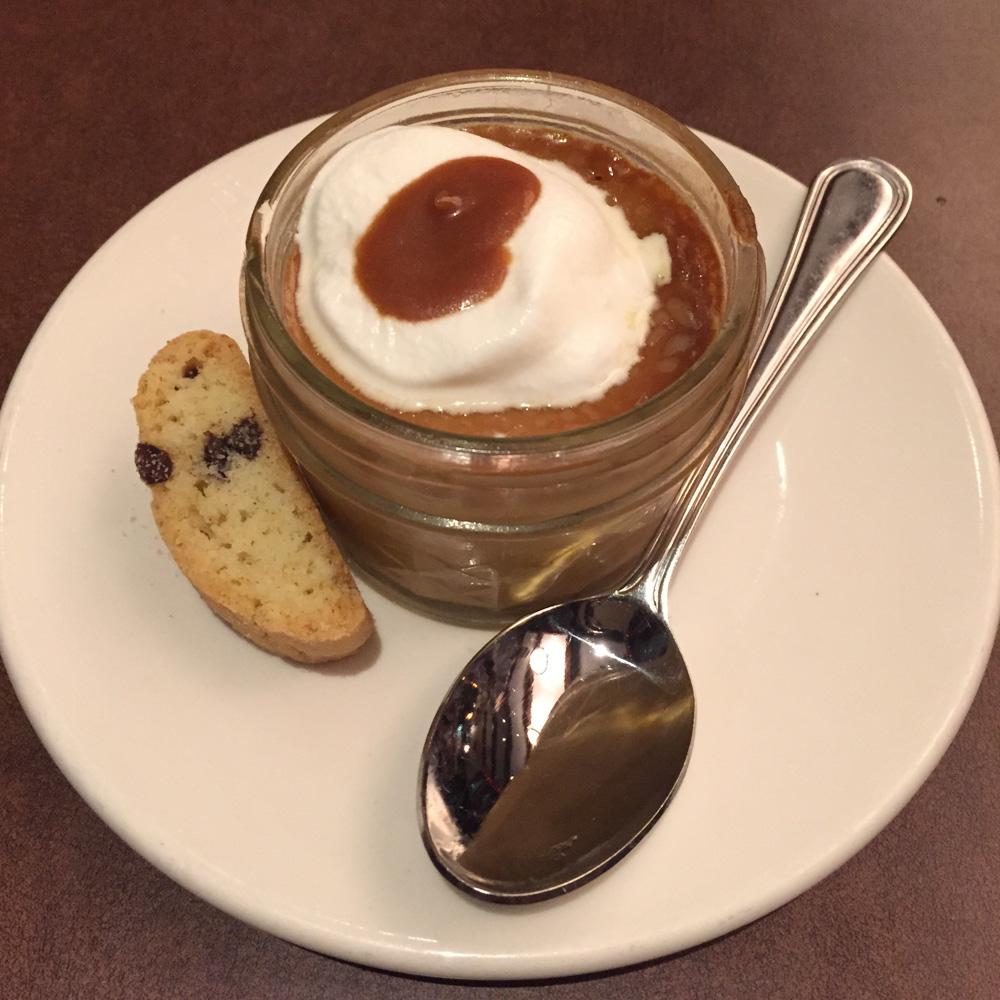 I had the butterscotch pudding for dessert. I can’t say I’ve ever ordered pudding from a restaurant before, but it was comfort food and something I haven’t had since childhood. It was nothing like those snack packs of yore or even the boxed mixes I used to (and probably would still) love. It tasted like the real deal and was served in a tiny mason jar, with a dollop of whipped cream and biscotti on the side.

Overall, Capurro’s is a decent choice for dining near Fisherman’s Wharf. I think the service and the food is hit or miss. I’d skip the crab, but I’d be willing to try some of the more interesting menu items on another visit.