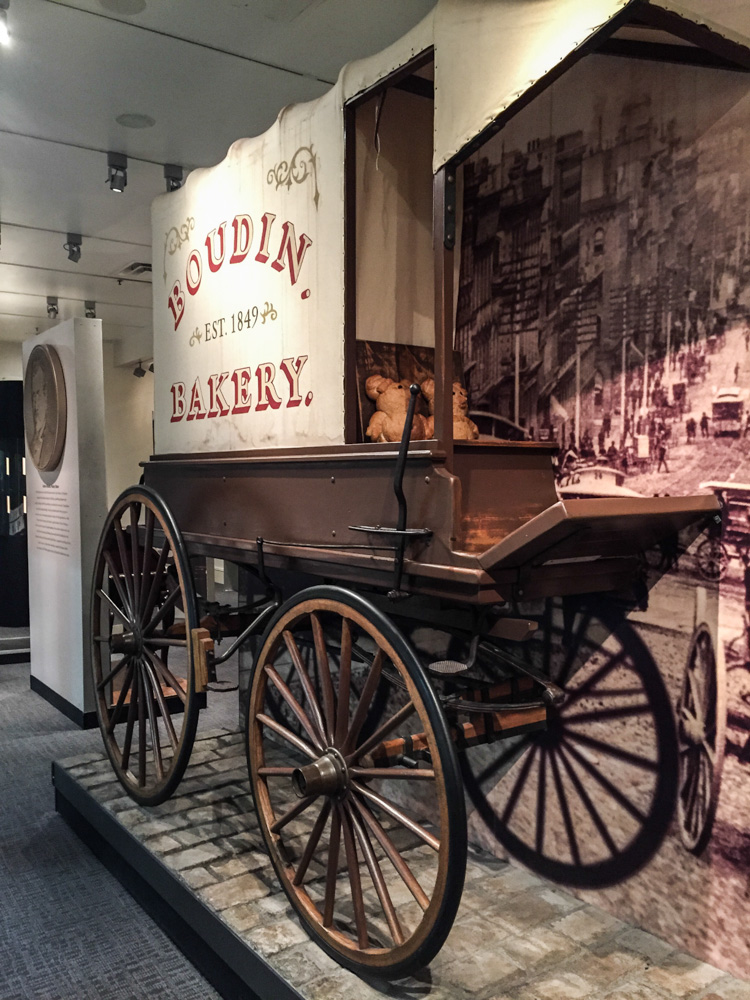 The bakery’s flagship location next to Fisherman’s Wharf and Pier 39 not only serves food from the Bakery & Café and the full-service Bistro Boudin, it also offers a marketplace (Bakers Hall), coffee shop (Peet’s), and the Boudin Museum.

The museum is in addition to the demonstration bakery that’s visible from the street, where anyone can watch the master bakers at work creating bread sculptures through the huge windows. The windows are right next to a vent where smells of baking sourdough bread are pumped out to the street to lure in hungry visitors. Passersby can ask the bakers questions while they work, to which they can respond via microphone.

We had been hanging out in the area and only had a half hour to spare before the Pier 39 parking garage would tack another $9 onto our bill, so I remembered the Boudin Bakery tour that I’d been meaning to check out. We walked in and skimmed the Bakery Tour sign at the foot of the stairs. I saw “$20” and the list of start times, the last of which we’d just missed, so I was ready to save this visit for another day, until a friendly restaurant host saw our confusion and came over to intervene. He asked if we were trying check out the museum. He happily explained that the museum was open and cost of entry was just $3 (and the schedule and $20 fee were for a sourdough critter-making class).

For visitors to SF with only a short time, the Boudin museum is an interesting stop, offering an overview of San Francisco history and showcasing many of the prominent figures in the city’s history. The history of San Francisco featured in the museum was interspersed with tidbits of Boudin’s history and memorabilia.

Soaking up the history of a place when you visit is a great way to understand how it became the way it is and learn about the people and events that helped shape it. The city’s quirks make so much sense once you understand the context. And of course, actually seeing the places those history textbooks discuss makes it so much more interesting to learn.

Though the tour is self-guided, one of the docents offered to give us a short introductory spiel about what the museum had to offer and noted some highlights of the tour. She pointed out the jar of “mother dough” on display. Dating back to 1849, the mother dough was saved from the fires after the Earthquake of 1906 by Louise Boudin who retrieved the dough from the burning. All of Boudin’s sourdough is made from the same yeast starter dating back 165 years. The strain of bacteria used has since been named after the city: Lactobacillus sanfranciscensis.

While we (as locals and nerds) were already fairly well versed in the Gold Rush history, we were surprised by a few things we learned from the museum displays. One of which was that there was an influx of French people during that time as well, and not because of the gold, but because they were fleeing the French Revolution of 1848. Boudin was started by a French family who arrived in San Francisco around that time, and was eventually sold to Italian-American Steve Giraudo Sr., AKA “Papa Steve” in 1941, so the company truly became a fusion of European and American baking traditions. 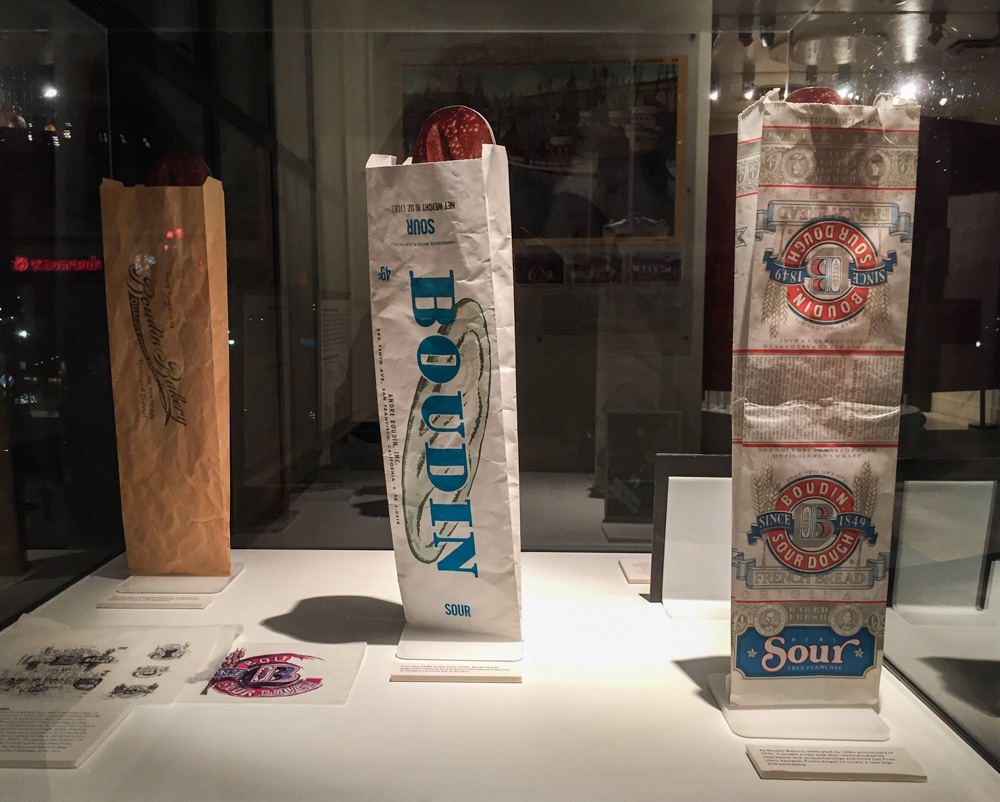 Boudin packaging changes over the years

Exhibits at the museum included a showcase of the changing design of the Boudin logo, the wagon that once delivered Boudin sourdough bread all around San Francisco (complete with adorable sourdough bread bear drivers), and an example of a baguette hung on a home’s front door by a nail, which was the method of making early-morning deliveries without disturbing anyone.

With all of the interesting artifacts on display, the best part of the Boudin museum were the docents, who offered fascinating tidbits not written in the blurbs. One such docent gave us plenty of supplementary anecdotes – one about Mary Ellen Pleasant who was born a slave, freed as a child, and grew up to become a successful businesswoman and millionaire in San Francisco. The docent elaborated on the woman’s impressive business savvy with juicy stories about running a brothel (referred to as a boardinghouse on the sign), getting inside information from her connections and hiding her wealth as the economy collapsed. The docents were so clearly interested in what their museum held that it was contagious and made us really excited to listen to their stories. 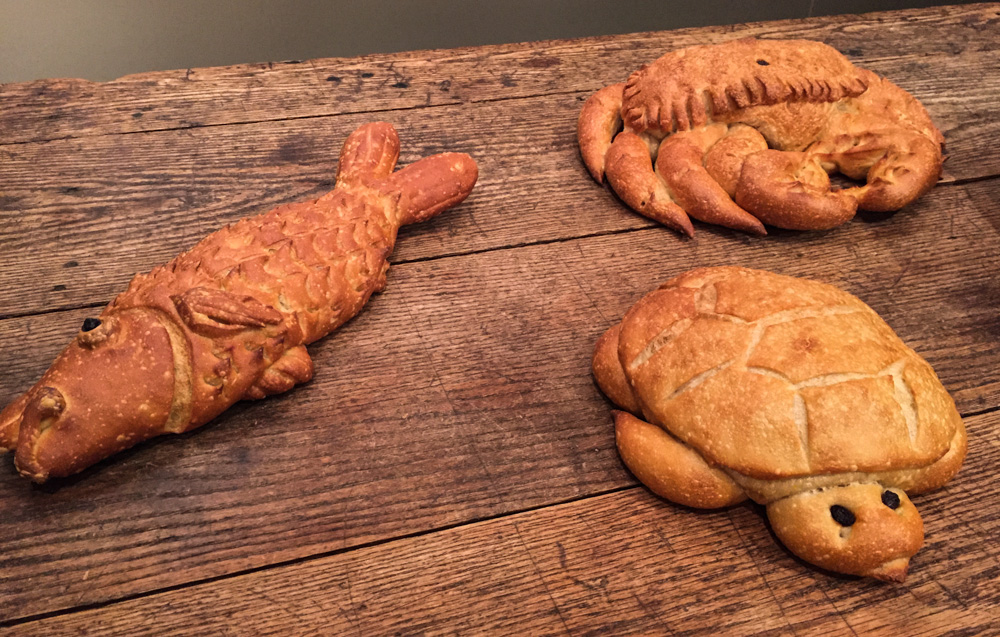 The museum also offers samples of sourdough bread and a chance to take photos with some of the sourdough bread sculptures, made into animals such as crabs, bears, lobsters, fish, and turtles. The ones on display are available to pick up and examine or pose with for photos. The docent explained that some terrible kids that visit (with their terrible parents) break or try to eat these sculptures, but that they are dried for weeks before they are brought out to this display. She turned over the crab-shaped loaf and explained how it was formed and shaped out of many loaves. Anyone can learn to make one of these little critters at one of the several classes offered daily at Boudin for $20 per person. 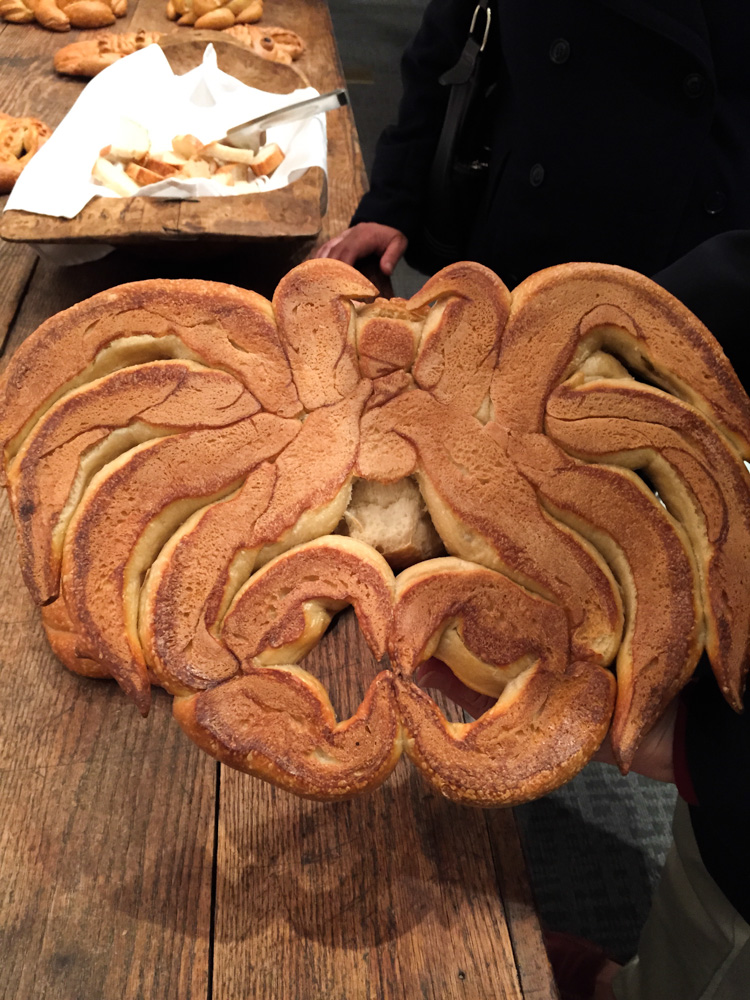 The intricate design of a sourdough crab

At the far end of the museum, there’s a catwalk over the demonstration bakery, where you can watch the process of making sourdough from start to finish. It begins with the mixing of ingredients upstairs (just a bit of the Mother Dough, flour, water, and salt), then the dough gets transported downstairs through the hopper, then machines divide and shape the dough before moving onto racks for baking. Though the view is of the same bakery that’s visible from the sidewalk alongside the Boudin building, the bakery tour offers a birds-eye view of the workers and machines, including parts not visible from the street. It’s like a miniature version of a factory tour, with signs describing the process and the science (and even a bit of math!) behind San Francisco sourdough. 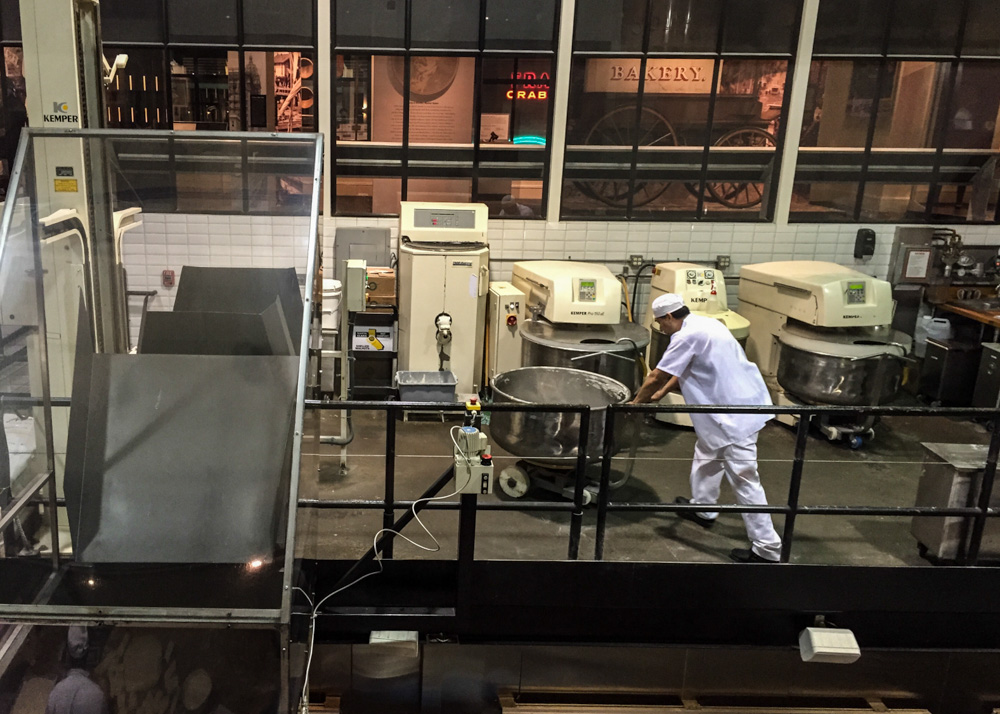 The bread dough is mixed on the upper level 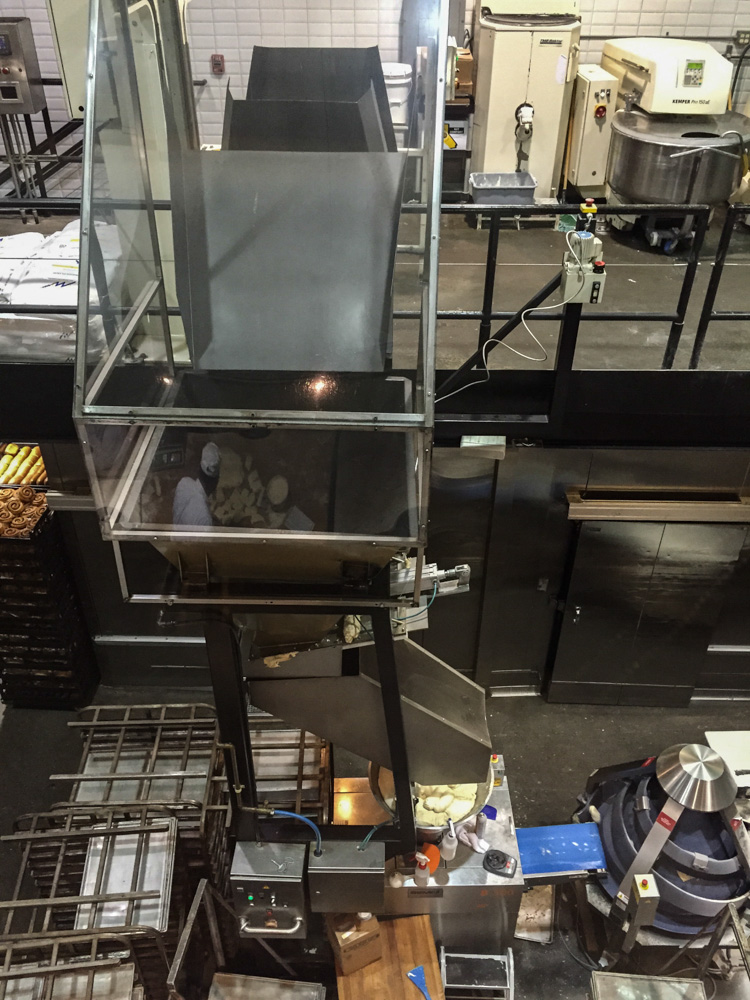 The various machines that transport and shape the dough

The Boudin Museum and Bakery tour was a pleasant surprise. I went in with low expectations, probably because it’s located at a touristy restaurant in the biggest tourist center in San Francisco, but it has a lot to offer those with a half hour to kill or people waiting to be seated at the Bistro. 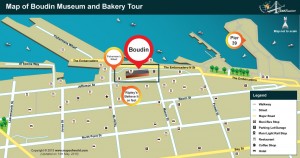 Location: 160 Jefferson Street, San Francisco, CA 94133 – Situated on the upper level of the building. Next to Fisherman’s Wharf and Pier 39

Cost: Free when you eat at the restaurant, $2 if you buy something at the store, but just $3 per person at normal price