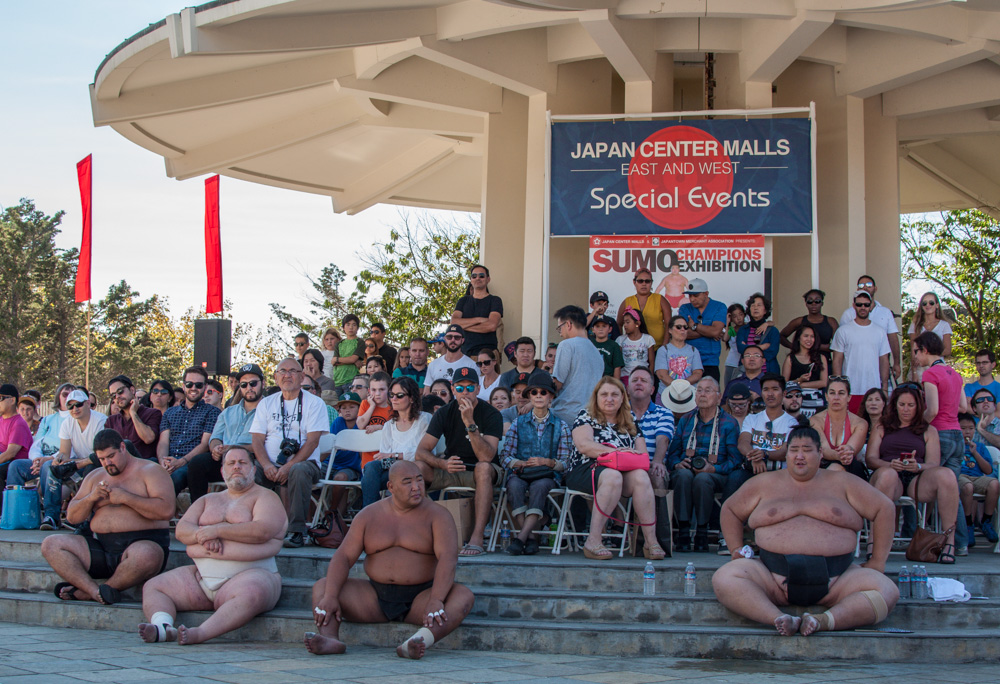 The Sumo Champions Exhibition is an annual event hosted by the Japan Center Mall, and in my opinion, one of the most underrated events in San Francisco. I always enjoy events in Japantown because they’re well organized and easy to attend, with a convenient parking garage, and plenty of street parking nearby. The crowds are managed well and people are respectful.

One part of what made the sumo exhibition great was the fact that it wasn’t uncomfortably crowded, and I was able to walk right up and grab a seat in the second row shortly before the 2 pm show started. The trade off, I soon learned, was that the seats were in direct sunlight during one of San Francisco’s rare 90+ degree afternoons and I thought I was going to die of heat stroke for a while there, until the sun ducked behind the Peace Pagoda for the second half of the show, sparing my life. Anyway, I had good seats and a good view of the action – maybe a little too good, as it turns out.

Attending a sumo event was, perhaps oddly, a lifelong dream of mine. I’ve always had a certain fascination at the sport.  When I was a child, I watched the sumo matches on television in amazement. I would giggle at their thong-diapered bodies, their mawashi (the traditional belt worn wrapped like a loincloth) revealing so much of their bodies. Afterwards, I would pretend to sumo wrestle my sister, stomping and slapping our thighs in imitation. As a teenager, I delighted to discover the existence of those sumo suits, made for the purpose of enacting hilarious uncoordinated wrestling matches. During my visit to Japan a few years ago I was disappointed to find that I would just miss the start of Sumo season, and also that tickets for these events cost upwards of $100.

So when I heard that there would be a sumo exhibition in San Francisco, and that it was completely free, I was understandably excited. There were three shows scheduled for Sunday, September 20, at noon, 2 pm, and 4 pm, followed by a meet and greet at 5pm at Benihana.

The show opened with a Taiko performance to get the audience hyped, and then the sumo wrestlers were introduced by Andrew Freund, the presdient of the US Sumo Federation and host of the Sumo Champions Exhibition. First up was Roy Sims, the current US Sumo Champion (6’5 and 380 lbs) who is from California. Then came Kelly Gneiting (6’0 and 430 lbs), the three-time US Sumo Champion from Idaho. The first surprise was that they were both white – I had no idea that there even was a US Sumo Championship, nor that its competitors were a diverse bunch of big guys (and even some women!). The next was that Kelly, who is in his 40s, holds the Guinness World Record for being the heaviest person to complete a marathon, and has done so twice in addition to once taking a 23 hour swim across Navajo Lake.

Next up was the Mongolian Sumo star, Byamba Ulambayar (6’1 and 370 lbs), a four-time World Sumo Champion, followed by Yamamotoyama, a Japanese World Sumo Champion, who, at 6’4 and 600 lbs, is the heaviest Japanese person ever. Yama seemed to garner the loudest cheers, whether for his champion or celebrity status, or for being the most traditional of the athletes in the ring this day, having trained in Japan and wearing his long hair in a loose topknot high on his head, or for his impressive weight class.

The host, Freund, began by having the sumo champs derobe, which was the moment I began to consider that perhaps my seats were too close for comfort.

Initially, the reveal of their nearly nude, rotund bodies in their mawashi was shocking, with every fold of skin and bump shown in graphic detail like a close-up from The Ren and Stimpy Show. Roy modestly wore shorts under his mawashi, but the others were on full display. 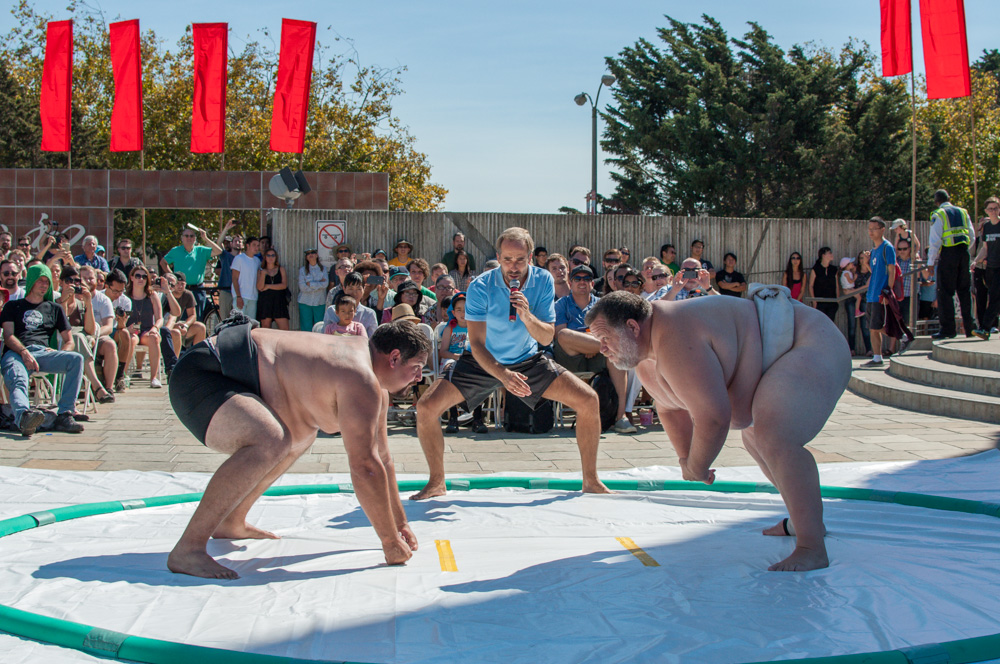 Roy and Kelly face off

Most of us aren’t used to seeing so much skin on public display (especially from men), and as I looked around at the faces of the audience around the ring, I saw surprise, laughter, and maybe disdain. Children in the audience were entirely unfazed, and there were quite a few Japanese Americans in the audience who showed no reaction.

The confidence and complete lack of shame from the sumo wrestlers helped normalize their near-nudity and the shock quickly wore off – I guess it’s true that attitude is everything.

On that same note, I get the idea that Americans seem to appreciate sumo wrestling for its comedic elements rather than for being a serious sport. To be fair, the idea of fat men in booty-baring thongs slapping one another and getting thrown around is kind of funny. But sumo is an ancient Japanese martial art and also the national sport of Japan, where these athletes are well respected.

But Freund and the athletes all seemed to embrace the humorous side, allowing their personalities to show in their performances and playfulness, which made for an entertaining exhibition. The host made good-natured jokes about their massive sizes throughout the show, while reminding the audience that these men are athletes and that they are strong and work out hard. He explained that traditionally, sumo wrestlers follow a diet of two large meals per day (no breakfast) of healthy foods, like meat, vegetables, and rice, sometimes served as stew (chankonabe). They also drink a lot of beer, which explains the belly. However, despite their healthy diets and rigid workout regimes, Sumo wrestlers typically have a life expectancy of 10 years less than average, likely because of their size and alcohol consumption. 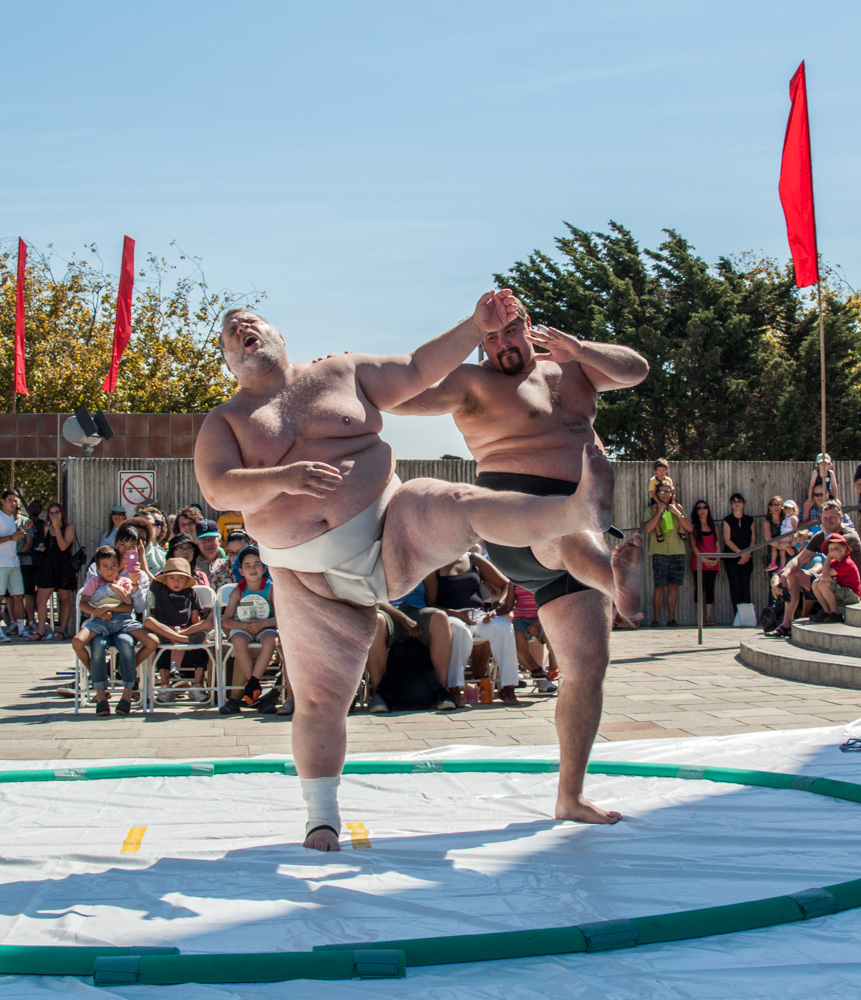 The host explained the basics of the sport and had the wrestlers demonstrate their warm ups and some of their moves. They showed which moves were legal and illegal in the sport (slapping and shoving: legal; punching and kicking: not legal; lifting their opponent up by his belt and giving him a major wedgie: surprisingly legal). One of the remarkable moments from this was the splits demonstration from Kelly, in which Byamba stood on his back as Kelly pressed his body flat on the ground in full middle splits, for those who haven’t yet been convinced at their athleticism.

Then began the matches, pitting the wrestlers against one another in various combinations. Each match was over within seconds, Freund acting as the ref and providing commentary. The audience cheered the sumo wrestlers on, rooting for a good show rather than a particular wrestler. It was clear that this was a friendly demonstration more than a serious match, as the guys laughed and seemed to give in a bit too easily sometimes, but the audience was given a show, complete with a few flips and throws. Between the matches, the host spoke and took audience questions while the wrestlers took a break from the heat on the steps of the Peace Pagoda. Freund gave explanations along with his jokes and kept things entertaining, as did the champs. When someone asked the champions what their favorite winning moves are, Yama answered (through Freund’s translation) that it’s when his opponent accidentally steps outside the ring. 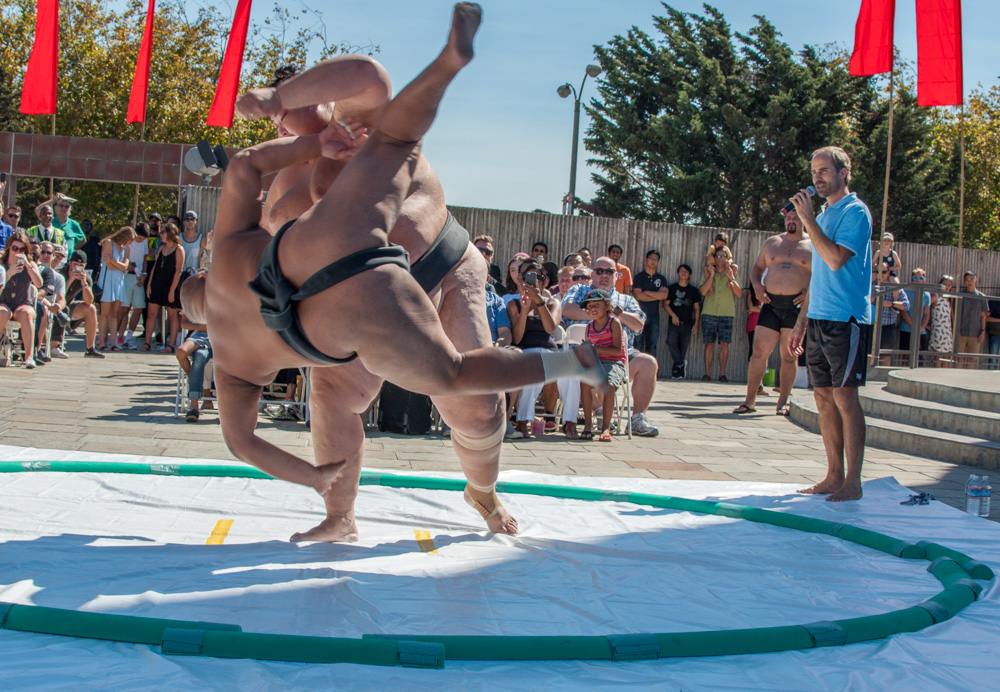 Byamba gets flipped by Yama

The matches continued and we saw the men get flipped and Kelly get thrown not just outside the ring, but also the mat, onto the stone tiles of the Peace Plaza. It had to have hurt – I didn’t just hear the thud of his body hitting the ground, I felt it. But he stood up and walked back to the mat to give his bow. Even landing on the mat must be painful, judging from how thin it was. The worrier in me kept wondering if they ever hit their heads on the ground when they fall, and how dangerous that must be.

The wrestlers moved slowly and walked stiffly, whether from their size or from pain and muscle soreness, I couldn’t tell. Three of the four men wore wraps around one ankle, and Yama had his knee wrapped as well. 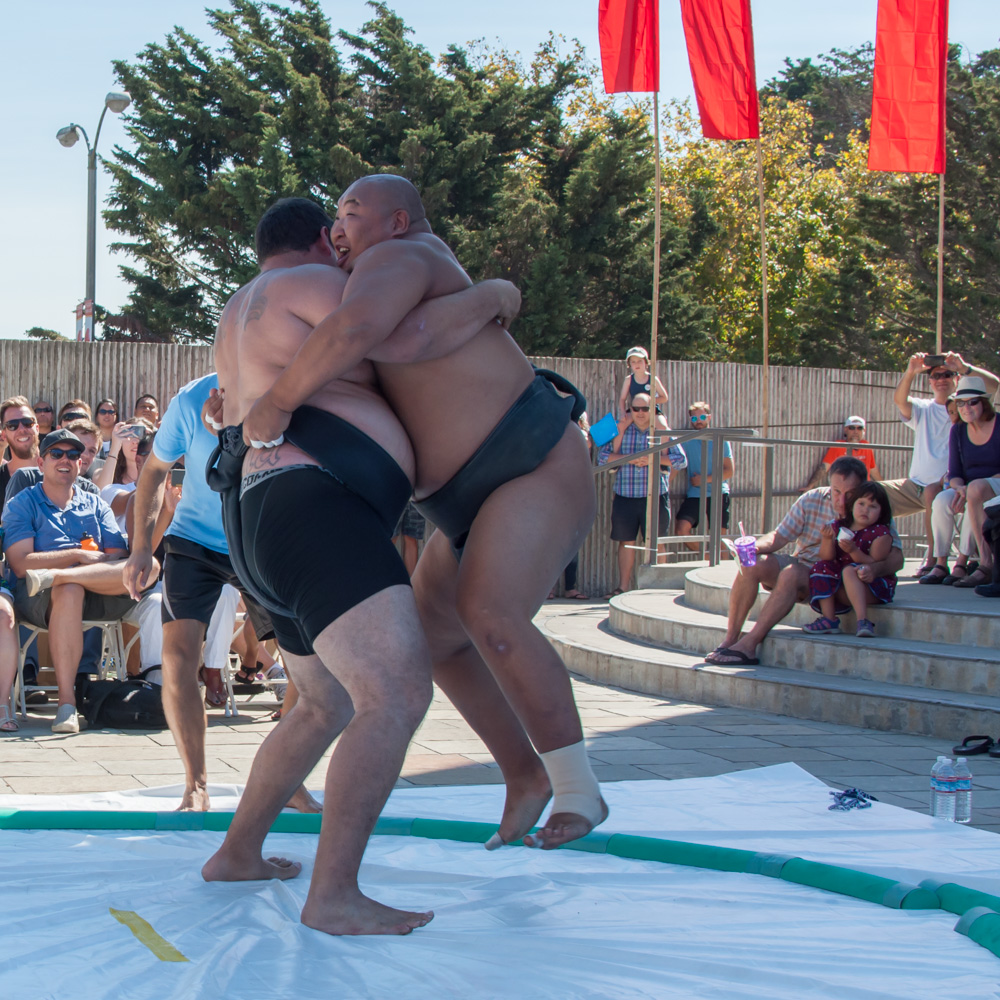 Byamba goes for the wedgie as Roy picks him up

The stress showed by the third and final exhibition show at 4pm, after the athletes had a short break inside. They weren’t taking as many hard falls this time. The show was almost exactly the same as the previous one, so I almost left, but I stuck around for the meet and greet.

At the end of both shows, a few kids were chosen to come up and take on the champion of their choice. The wrestlers got to act silly, with antics like swinging the kid around the ring by their arms or pulling Freund into the ring. The matches often lead to the champion letting the kid throw them to the ground. In the final show, the first little boy entered the ring to fight Byamba. They sparred for a while as the little boy tried his hardest to shove Byamba’s body, which resisted like a brick wall. In one of those efforts, Byamba pulled the kid’s shirt up to cover his head. Classic big brother move. The audience laughed as the kid responded by taking his shirt off completely and tossing it to the ground. Then he pulled down his shorts, and we all lost it as he stripped down to his tighty whiteys and continued to fight Byamba in proper sumo attire. That kid had some serious swagger. When he finished Byamba, knocking him out of the ring, he just about marched back to his seat without bothering to pick up his clothes. I sure hope that kid’s mom was recording that moment of glory, because that little boy just earned bragging rights for life.

Later, at the Benihana meet and greet, we watched the four champions stroll past the line with security guards– and then saw that little boy and his mother with another security guard, who escorted them right in to meet the champions. He skipped out a few miutes later with signed photographs of the champs. Like the rest of the event, the meet and greet was tightly controlled by security and the coordinators, who only allowed one photograph per group (and none of just the wrestlers). It wasn’t so much of a meet and greet as a photo op, as we were ushered over to sit in the small space between Byamba and Yama, Roy and Kelly sitting on the far ends. Without a chance to speak to them or ask questions, it was a little awkward. It felt like they weren’t really people, but cardboard cutouts. I did my best to greet and thank them as I squeezed into the space next to Byamba. They seemed tired, but as we sat for the photo, my phone vibrated in my pocket right against Byamba and he wiggled in the seat and said “whoa!” The four champions smiled and gave a thumbs up to the camera, which captured the moment perfectly, as the perfect memento from a great (and totally free!) event.