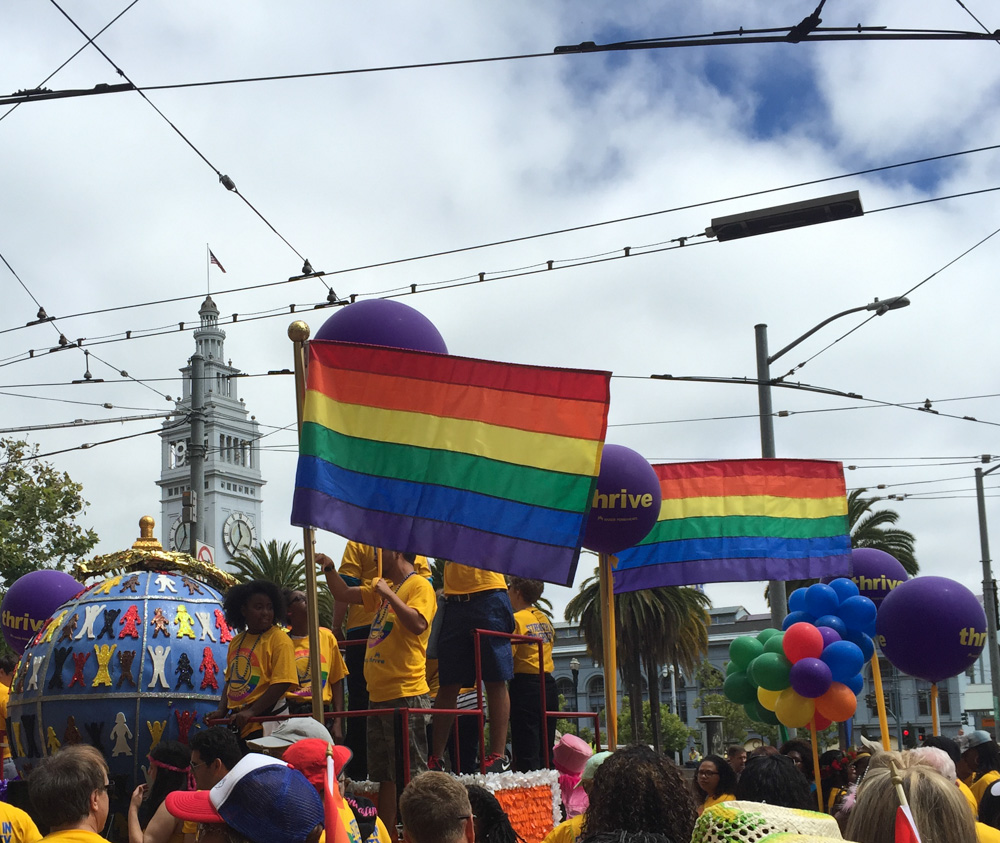 Rainbow flags fly in front of the Ferry Building

San Francisco showed its true colors over the last weekend of June for its 45th anniversary Pride Celebration and parade. Two days of festivities included musical and dance performances on a number of stages around Civic Center on Saturday and Sunday afternoons, and the Pride Parade on Sunday Morning. The event, which began in the 1970s, has grown into a massive celebration and commemoration of the history of the fight for equal rights, as well as an opportunity to educate the public about the injustices faced by the community. In 2015, it was mostly celebration.

San Francisco’s LGBT (Lesbian, Gay, Bisexual, and Transgender) Pride celebration is one of the largest in the world, and is an opportunity for people from the Bay Area and around the world to come out and show pride and support of the LGBT community. And party.

All month, Market Street was lined with rainbow flags, but for the final day of Pride, the street was flooded in a sea of color and people and crazy costumes. The parade traveled from the top of Market down to 8th Street, where it spilled into the celebration around Civic Center Plaza.

Pride Weekend in 2015 proved to be an even bigger celebration than usual when the Supreme Court made the landmark decision on Friday in Obergefell v. Hodges that would legalize same sex marriage in every state across the United States. As a result, the San Francisco LGBT Pride Parade and Celebration drew a record number of spectators, estimated at well over a million supporters who came out in celebration. The theme this year was Equality Without Exception.

San Francisco has long been at the forefront of the movement for equal rights, tackling inequalities across the spectrum, and highlighting community members who have made an impact. In the 2015 Pride Parade, notable participants included government officials such as Kamala Harris, Nancy Pelosi, Mayor Ed Lee, and Lieutenant Governor of California and former Mayor of San Francisco, Gavin Newsom, who jump started the fight for marriage equality by allowing same-sex couples to obtain marriage licenses back in 2004.

Jim Obergefell, who was named in the monumental Supreme Court case, was a guest of honor at the parade. Community groups included Dykes on Bikes who lead off the parade, the men of the 2016 Bare Chest Calendar, Cheer SF, Scouts for Equality, Mormons for Equality, and the Church Ladies and Gents for Gay Rights. 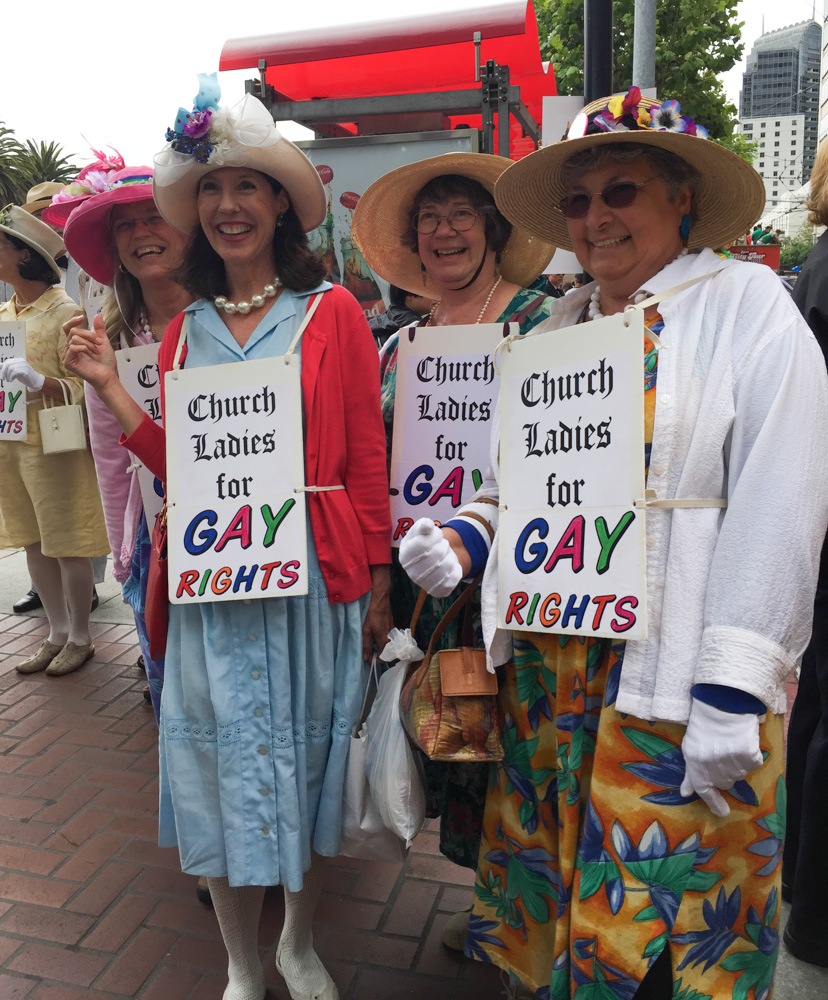 The Church Ladies for Gay Rights

Other notable groups who marched in the Pride Parade this year included NASA with their “Ride with Sally” signs, PFLAG (Parents and Families and Friends of Lesbians and Gays), and the Black Lives Matter movement.

Corporate groups showed their pride with huge groups of employees marching together in matching shirts. Tech companies had a huge showing in this year’s parade, with their employees and family coming out to show support. Notably, Apple had the biggest contingent, with a reported 8,000 members sporting simple white t-shirts with a small white Apple logo in a classic Apple design (though their old-school Macintosh logo would have fit the rainbow theme).

One of the most loved groups was the star-studded Netflix contingent, themed for Orange is the New Black, with stars Danielle Brooks (Taystee) and Selenis Leyva (Gloria Mendoza).

Facebook’s was allowed to march despite protests to its participation this year. The organization fighting Facebook’s real name policy was also present to hand out #MyNameIs stickers to inform the public about the policy’s harm to those in the LGBTQ community, including drag queen performers who use stage names on the social network.

Google showed off its self-driving car, and a rainbow-wrapped Tesla made me wish that they really offered that paint option.

To keep it San Francisco-centric, some of the groups like Yahoo! used street trolleys or double-decker tour buses to travel down Market. Contingents from BART, SFMTA, and the city’s fire and sheriff’s departments also marched.

Though I’ve been a spectator at the Pride Parade in years past and had a blast, being part of the parade is an entirely different experience (but also really fun). This year I was invited by a friend to march in the parade along with his employer’s contingent.

I walked the parade route with Kaiser Permanente, who partnered with the Golden State Warriors for the parade and this strange fusion generated some great shirts with a rainbow Warriors logo (I was asked all day where people could buy these shirts – you probably can’t! Sorry.) The Kaiser/Warriors contingent boasted celebrity grand marshal, Rick Welts, the President and COO of the Warriors, who showed off the Larry O’Brien championship trophy all along the parade route. Welts made headlines in 2011 for being the highest openly gay executive in the professional sports industry. 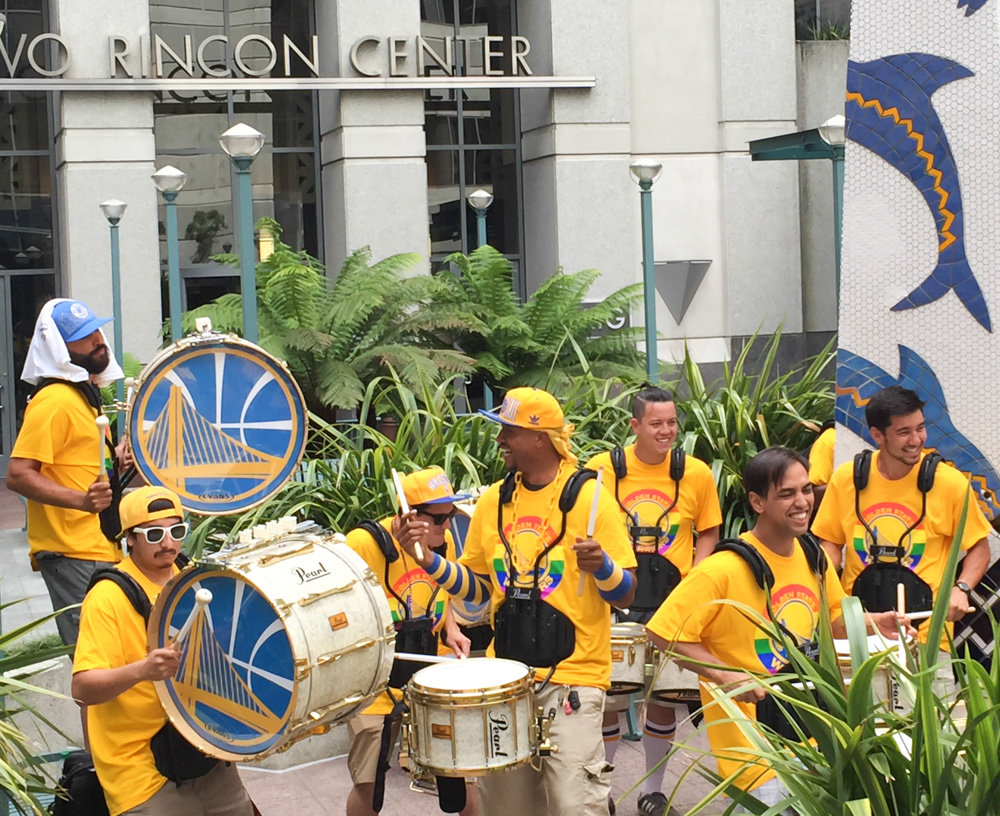 The Golden State Warriors drumline practice before the march

The Warriors drumline offered rhythms for our march, and for the Zumba performers and dancers on stilts.

Experiencing the parade from the other side is a unique experience that helped me understand the importance of Pride events like these. Showing and seeing and especially feeling the support from the community is such an important aspect of acceptance, tolerance, and equality. The chants and cheers (for the Warriors, mostly) and waves from the crowds helped all of us, participants and spectators alike, feel connected to something even bigger.

The parade lasted around 6 hours this year, which is insanely long, especially considering that spectators lined up starting as early as 7 am to get a good spot. The event organization did offer grand stand seating for $45 per person, with proceeds supporting the Pride events.

The parade led us to the massive party in the streets that took place for the rest of the afternoon. Several stages in around Civic Center Plaza hosted entertainment including DJs and live bands playing a variety of music, with performances by Shiny Toy Guns and the Glide Memorial Choir. There were booths selling food as well as beer, wine, and mixed drinks around Civic Center Plaza. Artists, community organizations, and businesses were also set up at exhibitor booths at the celebration. 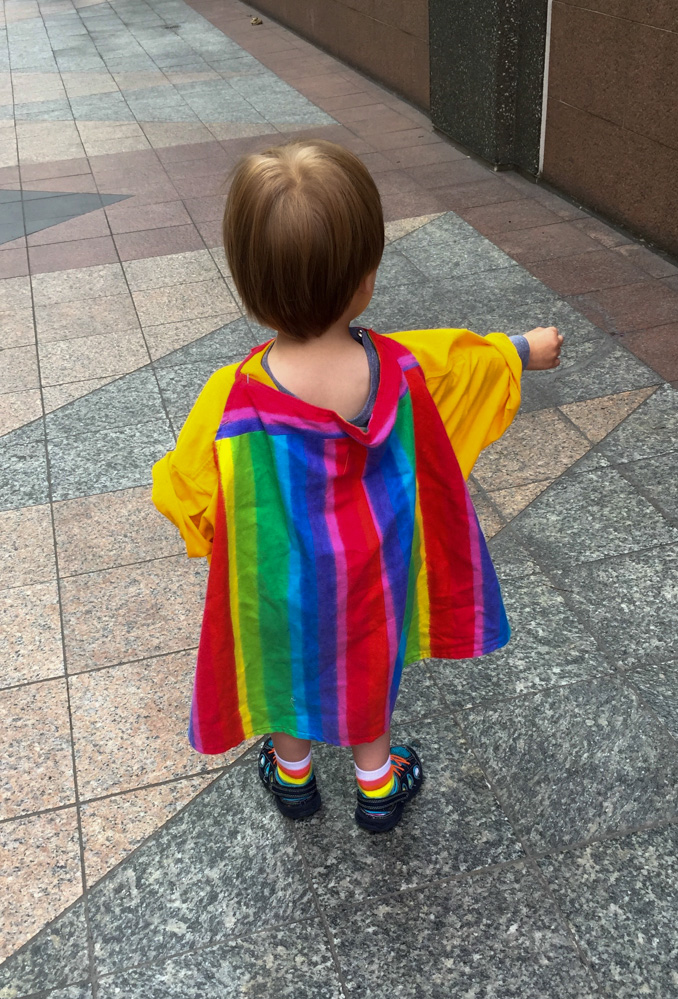 The celebration was a happy and positive one, a celebration of the huge step our country took in securing equal rights. Police said there were no major incidents of note and I saw no violence or protestors, although there was a designated free-speech area established that I never approached. In fact, the Pride celebration seemed especially family-friendly this year, without a lot of overt sexuality or nudity on display (I’m sure there was still plenty), and quite a few children joining the celebration. The 2015 Pride Parade was truly a celebration of love.