Community Day at the Palace of Fine Arts

Throughout 2015, San Francisco’s lasting monument to the Panama-Pacific International Exposition, the Palace of Fine Arts, will host a celebration of the event’s 100th anniversary. The world’s fair first opened on February 20, 1915, and welcomed visitors from near and far for about ten months, until December 4.

Kicking off the celebrations in 2015, Community Day was held at the Palace of Fine Arts on February 21, the first of many centennial events that will continue through December. The free event drew thousands of visitors to experience the Innovation Hangar, a modern day miniature version of the world’s fair as well as a day full of programming. 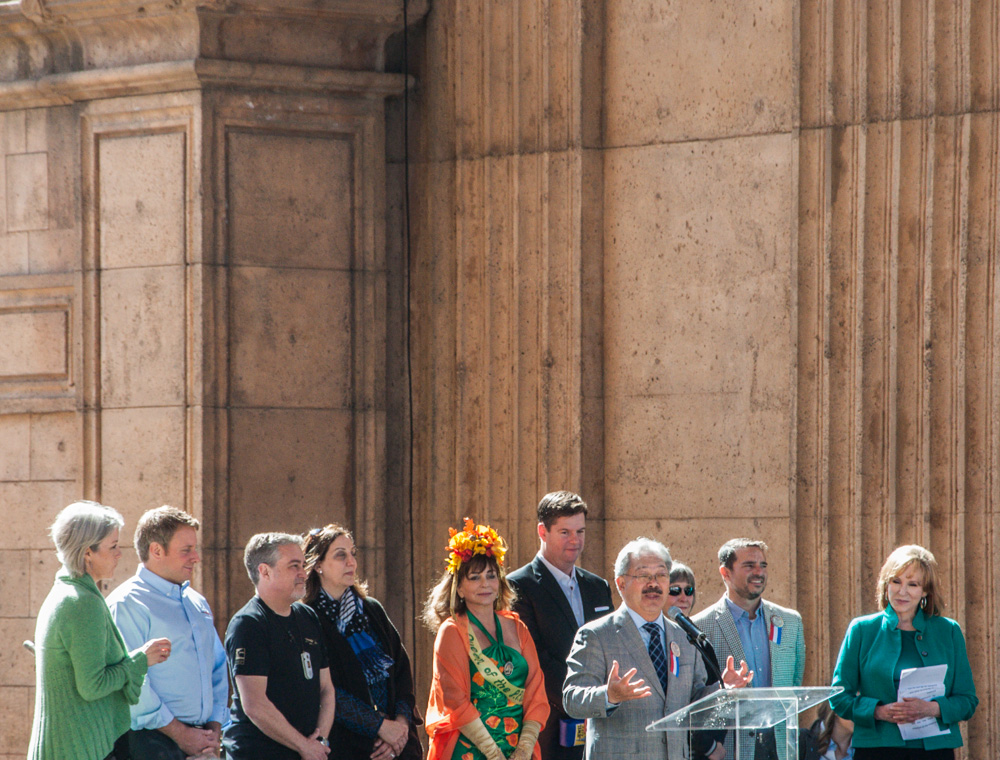 Mayor Ed Lee speaks at the opening ceremony alongside other VIPs

The opening ceremony, took place under the rotunda at noon, and was hosted by my favorite news anchor, Cheryl Jennings of ABC 7 News. She introduced the event’s VIPs, including Henry Ford III, whose grandfather was an important figure at the 1915 PPIE, and Mayor Ed Lee, who reflected on San Francisco’s legacy of innovation, which continues to shape the city.

Other notable attendees included historical reenactors playing historic figures that attended the 1915 expo, including Charlie Chaplin and Laura Ingalls Wilder, as well as some commoners who helped set the scene and bring us back to 1915.

The short opening ceremony took place between performances by Taiko drummers and ukulele players (both featured in the 1915 PPIE, where the uke made its mainland debut). The afternoon Uke-A-Thon brought hundreds of ukulele players together to play along to some popular tunes, along with Polynesian dancing.

A group of native Ohlone led us inside the Innovation Hangar, the indoor space of the Palace of Fine Arts. The venue was much larger than it seems from the outside, and filled with exhibits and booths from organizations like the Fine Arts Museums of San Francisco, California Historical Society, and the Exploratorium, workshops, community performances, and food stands.

The Innovation Hangar gave us an idea of what the 1915 PPIE was like with a modern day version, keeping the theme “Then, Now, Tomorrow.” The exhibits featured detailed history and artifacts from the 1915 Panama-Pacific International Exposition alongside technology from today and the future. 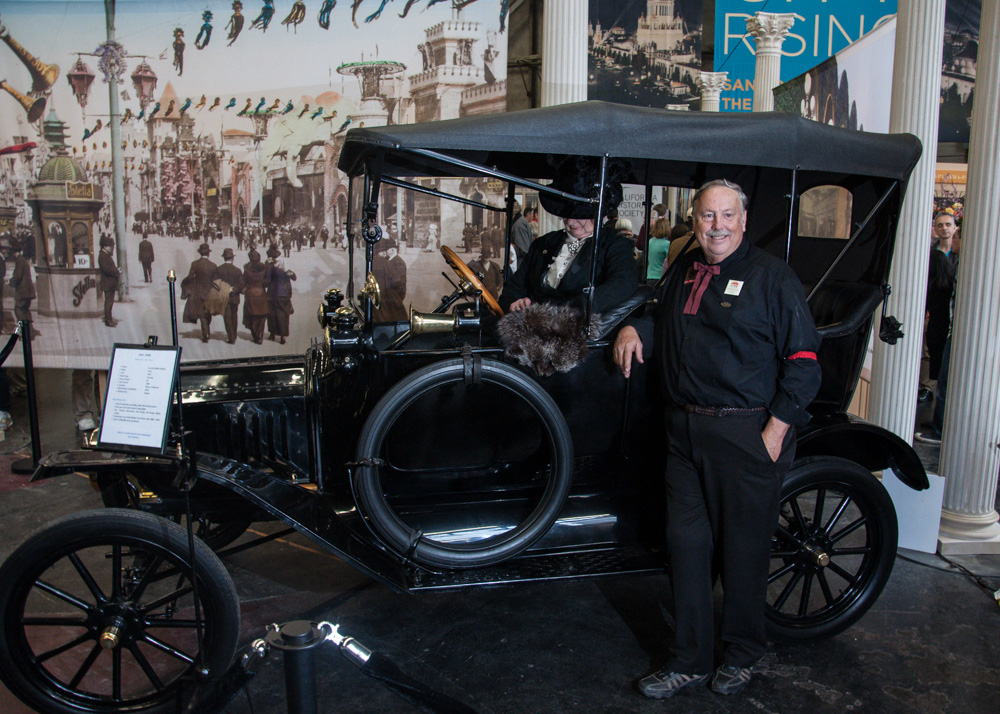 Ford Model T and its owners

The main floor held most of the historic exhibits, including photos and a map of the 1915 PPIE palaces and descriptions of some of the highlights from the events. A Ford Model T assembly line was set up at the 1915 fair, where visitors could watch as the cars were assembled. At the centennial event, two Model Ts were on display from a private collector (who dressed in clothing from that era to pose with car) and from the Ford sponsored exhibit, alongside a modern Ford. Other vehicles on display in the Innovation Hangar were fire engines from the original expo and a Wells Fargo Stagecoach. 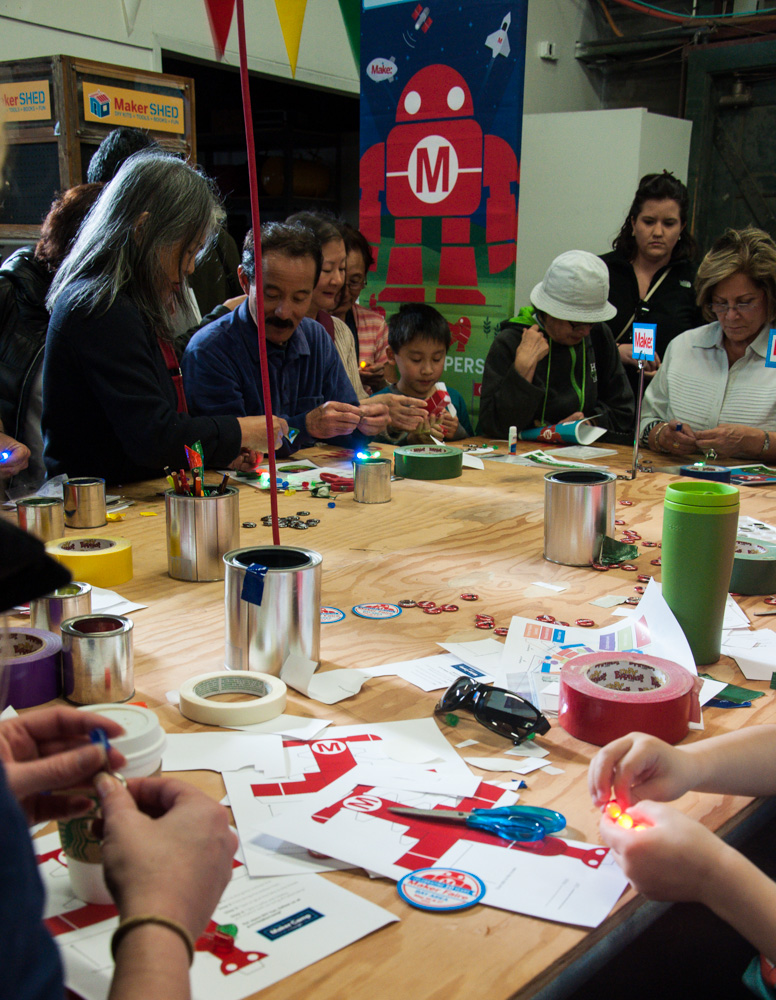 At the opposite end of the hangar was the Maker Faire Maker Media Lab, a workshop space with hands-on exhibits with 3D printers and giant robots, stations to make light-up LED pins or crafts, and watch sculptors at work.

Upstairs in the Wearable World was more modern and futuristic technology, from mobile accessories to a headband that purports to read brain waves, which appeared on a screen color coded to correlate with brain functions, like emotion or logic, and refuting the myth that people are either right- or left-brained.

« Hanukkah at Union Square » Bring Your Own Big Wheel