Opera at the Ballpark 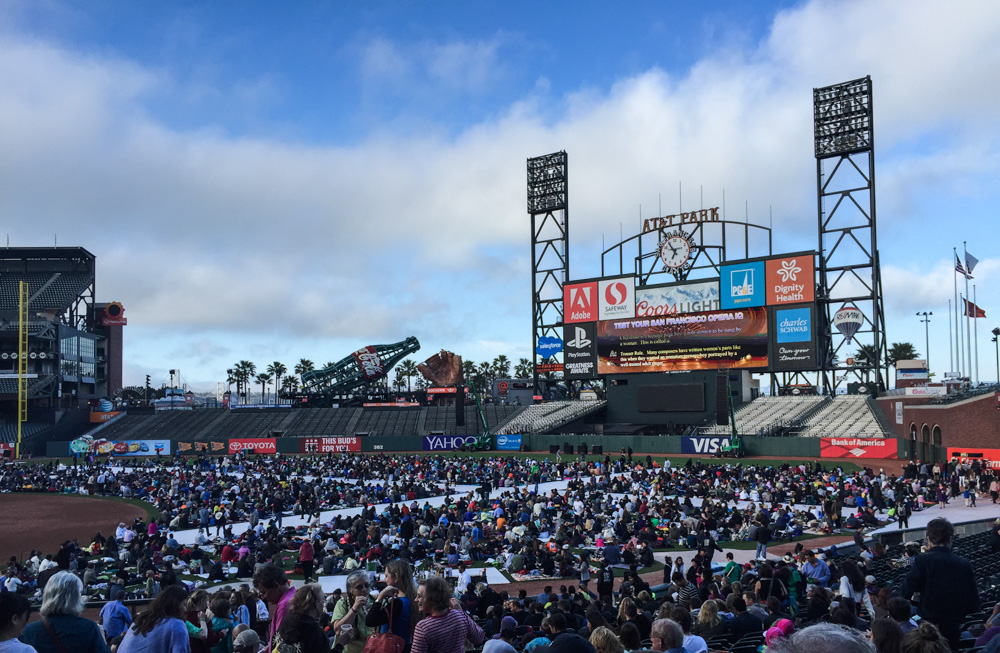 One evening each summer, AT&T Park hosts the annual Opera at the Ballpark event. While the San Francisco Opera is performed at the War Memorial Opera House, it’s simulcast onto the 103 foot wide, high definition screen at the baseball stadium. Opera-goers at the ballpark can watch the entire performance while lounging on the lawns of the baseball field or in the seats of the stadium. It’s a great opportunity for those who wouldn’t normally go to the opera to experience one.

The summer event started in 2006, and typically takes place around the 4th of July and features a different opera each year. In 2015, Opera at the Ballpark was held on July 3 with a performance of Mozart’s The Marriage of Figaro.

Thanks to the generous donors, Opera at the Ballpark is totally free, unless you want to purchase concessions, like garlic fries or wine and beer. Those are priced at typical ballpark prices (that is, overpriced at $10+ for a glass of wine). Since you can bring in your own food (and unopened drinks – no alcohol), you might prefer packing your own picnic with snacks to enjoy before and during the show.

A special online RSVP gave attendees a barcode for early entry a half hour before the general admission gates opened at 6:30 pm. The early entry was especially important to those hoping to get a spot on the field to spread out their blankets, enjoy a picnic, and snuggle up once the fog rolls in.

Sitting on the field was one of the big selling points for me (you know, aside from the opportunity to watch a world class opera for free). But, as I learned the hard way, if you really want to sit on the lawn, you’ll need to get in line much earlier than a half-hour before the general gates open. I arrived around 6 and waited in the long, unmoving line at the Marina Gate for 45 minutes before we were told that lawn seating was full and we’d need to go wait in another line for regular seats. I was disappointed with the way they handled those of us they couldn’t accommodate on the lawn, making us wait in another line behind people who just got to the park. They probably should have limited the number of early entry barcodes they released, so there wouldn’t be so many of us trying for lawn seats.

That was disappointing to be sure, but the seats weren’t so bad and at least we’d have back support for the several hours of opera. I noticed that about a quarter of those who did get to sit on the lawn left before the final two acts, which may have been because of discomfort, but was nonetheless very annoying to someone who really wanted those seats and stayed for the entire performance (me).

We could see just fine, though some speakers blocked part of the subtitles for many of the seats. The park hadn’t planned to open up the upper level of seating, but there were so many people that they did.

As we waited for the opera to begin, a pair of commentators appeared on the screen in the spirit of merging baseball and opera to prepare us for the show. They wore baseball shirts and sat in the announcer box while they gave us information about the evening’s events and told us that there were 30,000 of us in attendance and the ballpark, with another 3,000 or so watching from the Opera House.

They helped us get into the spirit of Opera at the Ballpark by showing classic Looney Tunes cartoons, including their operatic shorts like The Rabbit of Seville. It was a funny and nostalgic way to start the show. 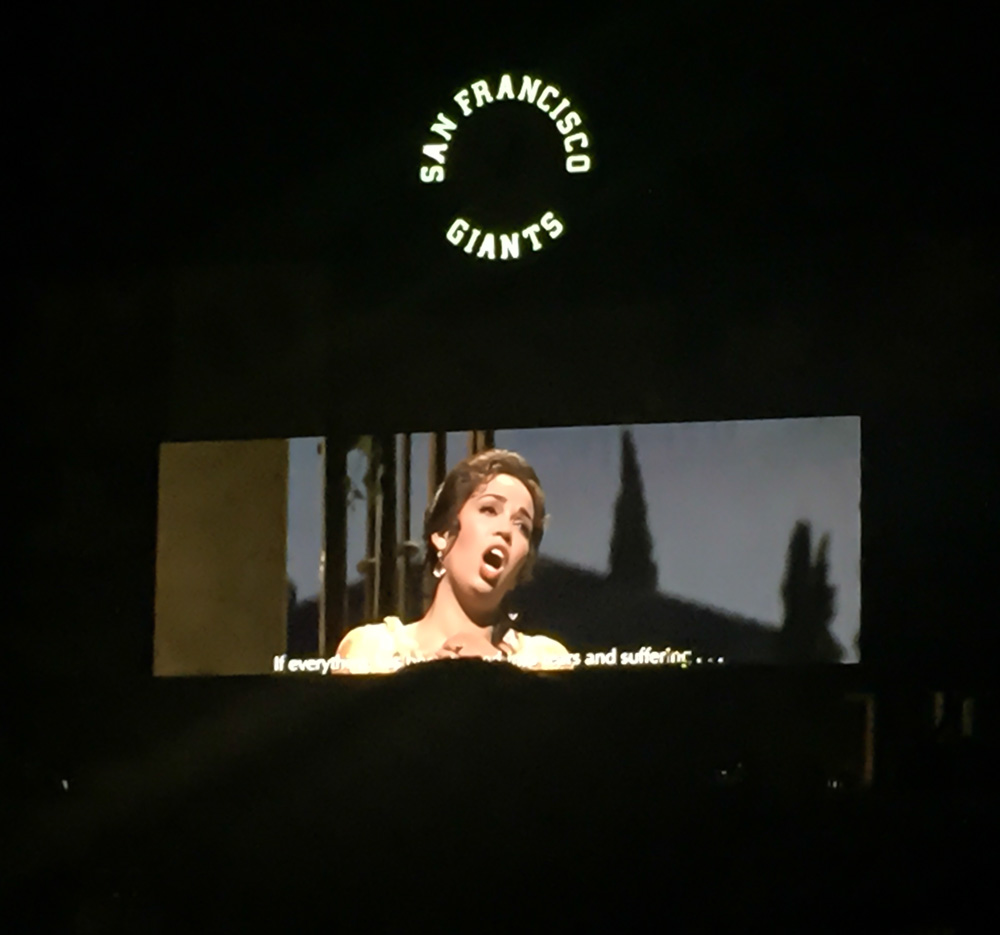 The Marriage of Figaro on the big screen

The opera itself was great. The Marriage of Figaro is a four-act opera composed by Mozart, sung in Italian with subtitles. It’s a comedy, which made it a great choice for the ballpark audience. I found it easy to follow, and they handed out a program with a summary of each act, as well as information about the event and the artists. The opera lasted almost 4 hours, however, which must have been tough for the younger viewers (especially following along with the subtitles).

There were two intermissions during the show. During the first, a singer performed “Take Me Out to the Opera” while the audience got up to stretch or get refreshments or stand in the long lines for the bathroom. In the second intermission, the opera house gave us a behind the curtain look at the set change and discussed some of the logistics. They explained their favorite word: supernumerary, or an extra, and explained how to apply to become one. There was also a marriage proposal at the park!

When it was over, the performers took their bows wearing increasing amounts of Giants gear, as a final baseball-themed nod to all of us at the ballpark. 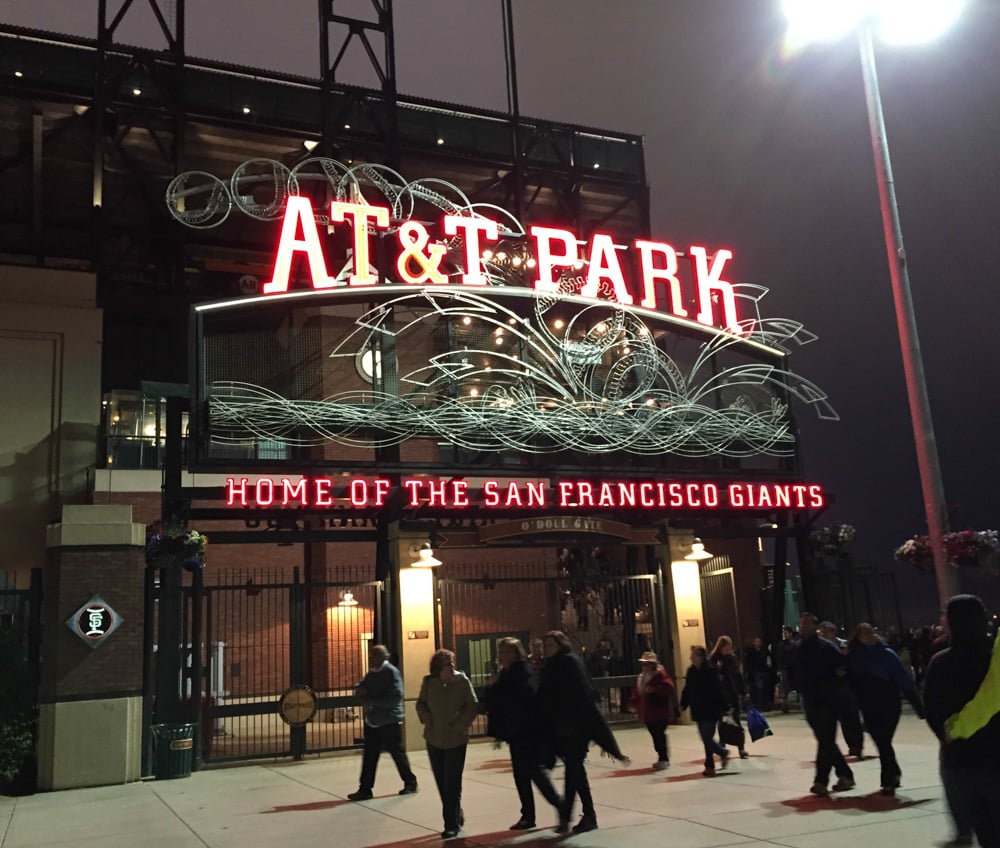 AT&T Park after the opera

In some ways, watching the opera from the ballpark was even better than viewing it from the venue where it was being performed. We had various views and angles, and were able to really see the expressions and costumes of the performers (without any of those opera glasses). Plus, the casual atmosphere meant we dressed comfortably and warm, got to eat during the show, and wrapped up in blankets. It doesn’t get much better than that. They also offered us a 50% discount off tickets for the opera this fall, which I gladly took them up on for The Magic Flute.

We took CalTrain to the event, because of its convenient access to the ballpark and so did many of the others. Though it was convenient, it wasn’t cheap, at about $18 round trip per person from San Jose. For many, it was probably cheaper to drive and pay for parking near the park.

When the event ended, there were special event trains ready to take us home. Though the lines were long, at least 3 trains filled up quickly and were on their way. They were local trains, however, and they took 2 very long hours to reach San Jose’s Diridon station. It was a long day and a lot of time invested to see the opera, but a nice evening and a great family activity or date night.