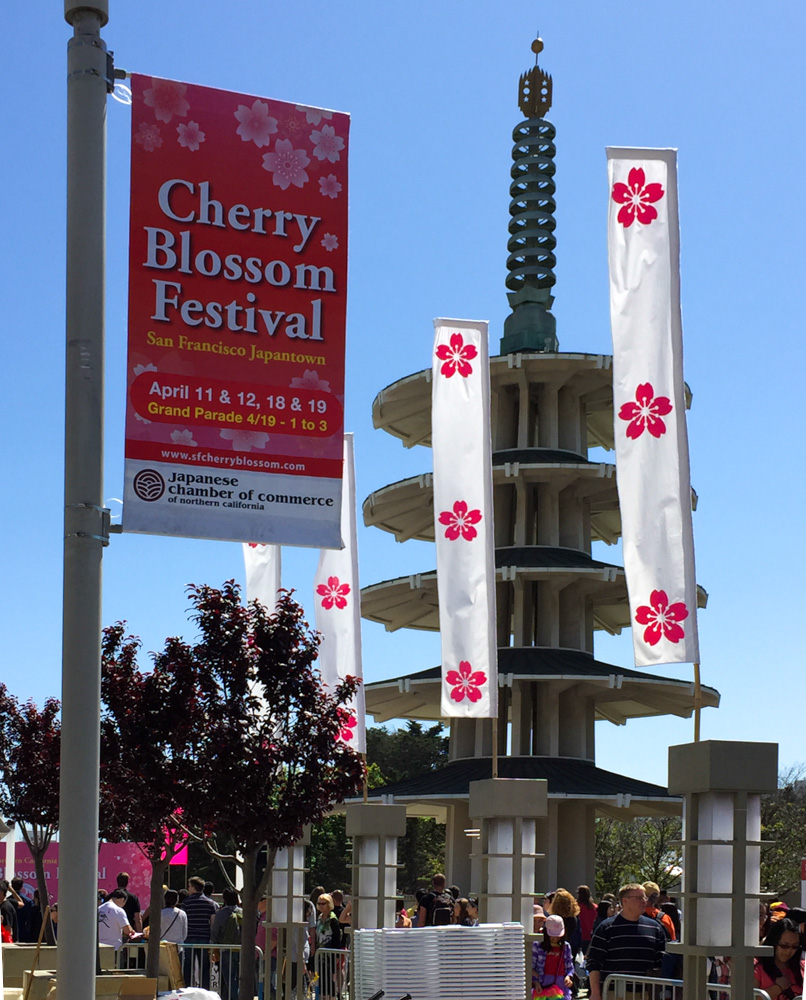 The 2018 event will be held from April 14-22, and closing with the Grand Parade on Sunday, April 22. The Cherry Blossom Festival celebrates the blooming of cherry trees, which are an important traditional symbol of Japan. Unfortunately, the timing of the event didn’t coincide with the blooming of the trees around the plaza, so there weren’t many cherry blossoms to be found at the festival, aside from cherry blossom prints and some fake blooms.

The festival is an opportunity to showcase San Francisco’s Japantown and the historic community, as well as to share Japanese food and culture with the whole Bay Area. The event, like the neighborhood itself, features aspects of old Japan and new Japan, from the traditional music, dance, martial arts and tea ceremonies, to the modern Anime, video games, and cosplay. Around the festival, there were people dressed in their finest kimonos and people dressed in Japanese street trends or crazy costumes.

There was an eclectic assortment of scheduled events outlined in the festival program, though they were not always accompanied by helpful descriptions. One of the first events of the Cherry Blossom Festival this year was an announcement of a new postage stamp to commemorate the 100th anniversary of the US gift of dogwood trees to Japan, to be issued in both countries as a symbol of their friendship.

There were also community events like the crowning of the Northern California Cherry Blossom Queen and her court, presentations from several local schools, and numerous performances showcasing Japanese culture. Stages around the festival hosted performances from Taiko groups, traditional dances, like Buyo or Yosakoi, various martial arts – and a chance to meet a couple of sumo wrestlers. There were also some music groups and singing groups who performed near the festival food court for entertainment and dancing while they ate and drank.

The smaller Sakura 360 stage held trivia contests on topics like video games or anime, as well as other games and scavenger hunts. There was also a demo and competition for Kendama, the old fashioned Japanese ball and cup toy. I’ve always seen these toys in shops and figured they were the kind of toy kids play with for a few minutes before they reach for their 3DS. There’s surprisingly a lot to this version of the classic toy, though. Somehow, they’ve created a real (ok, “real”) sport out of it, with a long list of tricks and people who get really into it.

Other traditional cultural exhibits were housed at various locations around Japantown, including Shodo (calligraphy), Bonsai (tiny trees), Ikebana (flower arranging), Marato dolls, Miniyonku model race cars and origami (paper folding). Local art exhibits were featured in the East Mall’s Suite J-Town: The Art of Resilience. Projected onto one wall was a video showing local Japanese families and their stories of being relocated to internment camps, and how they rebuilt their lives afterwards with remarkably positive attitudes. 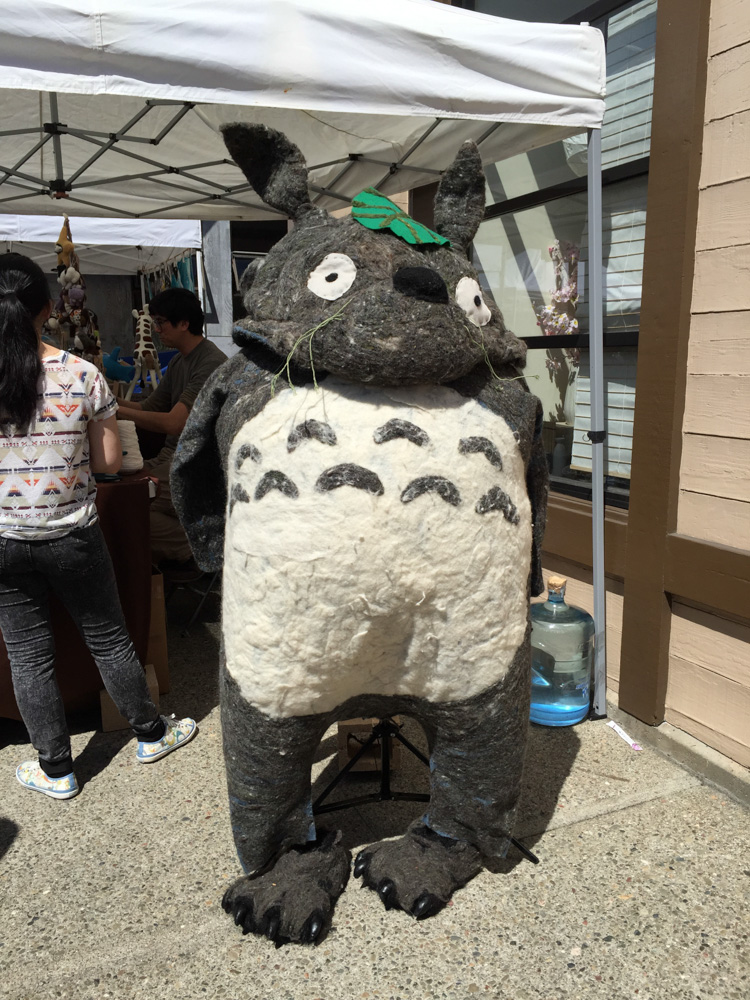 Back outside, lining the crowded street, were booths from sponsors and sellers. There were several sponsor booths handing out freebies, like Pocky and Chobani yogurt, which both had short or quick moving lines every time I saw them. The street fair booths along Buchanan Street featured an array of handcrafted goods, from jewelry to clothing, terrariums, and even needle felting. 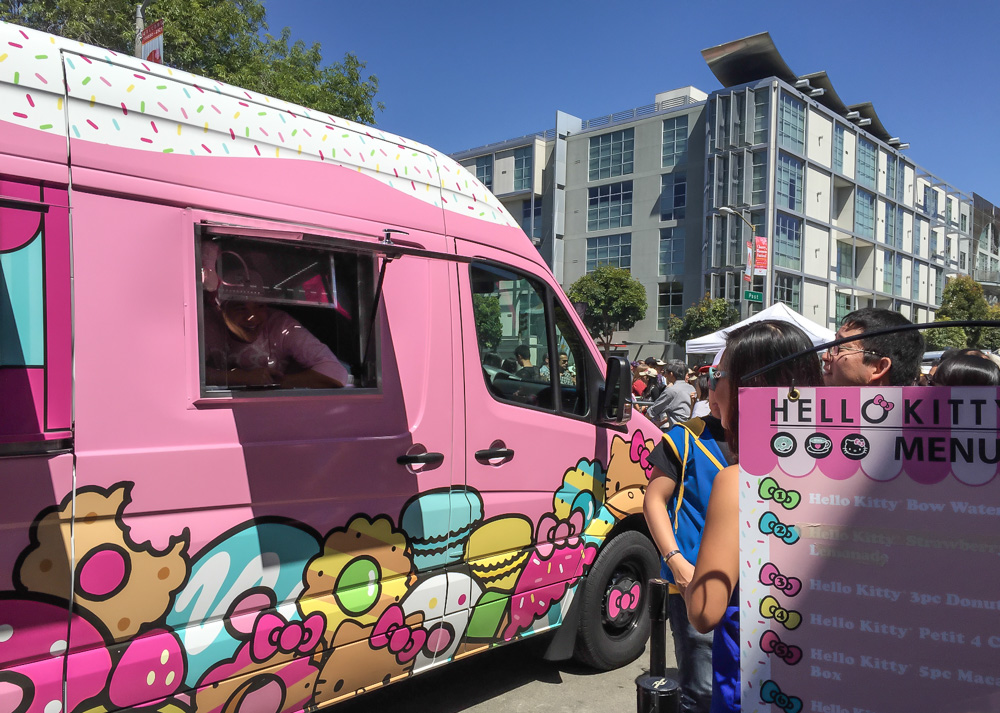 One of the highlights of the festival this year for a lot of people was the Hello Kitty Café food truck, which is a traveling cafe that sells Hello Kitty themed food. Though there were no giveaways, people waited over two hours in line for the opportunity to spend $10 on 3 donuts that have a Hello Kitty bow on them, $15 for a set of 4 Hello Kitty petit fours or 5 macarons, or a $3 bottle of water shaped like the Sanrio character’s bow. At least they gave away a tiny reusable Hello Kitty bag to those who spent over $25, which wasn’t hard to do. I underestimated people’s obsession with Hello Kitty, because while I find her cute and those confections are probably (maybe) tasty, I can’t see waiting so long for any of them. I guess I’m alone in that, because others sure waited… and waited, and seemed so happy with their purchases, so who am I to judge? Alongside the Hello Kitty truck was craft area called Kids Corner, where children played games or made crafts, like a sand painting of Hello Kitty, for a fee. 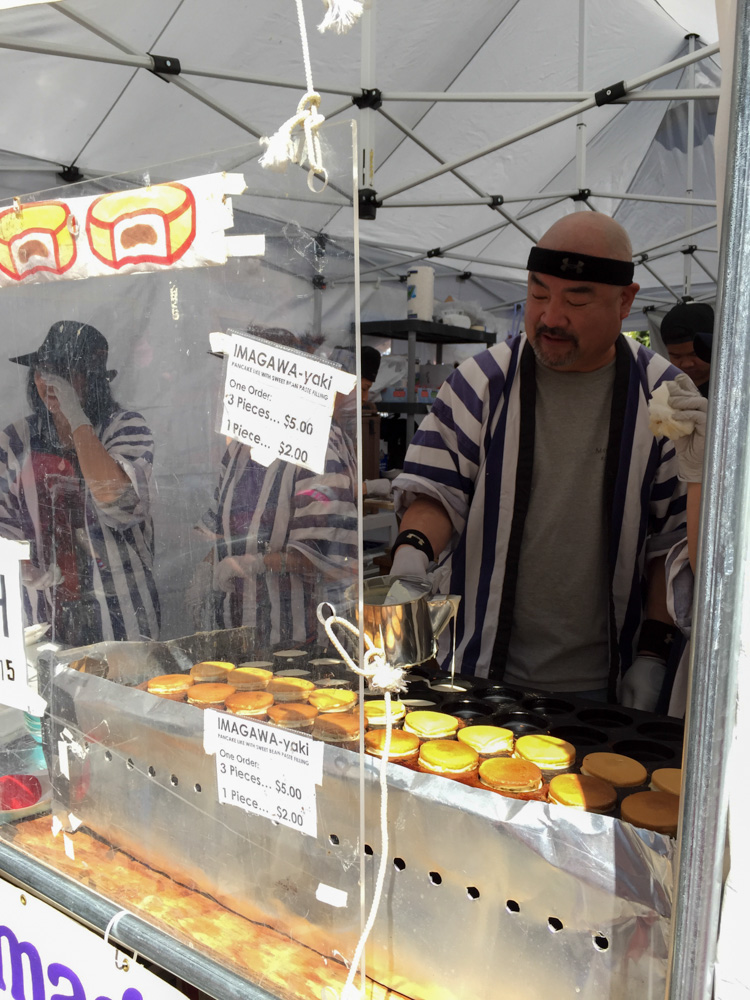 Japanese treats at the Food Bazaar

And of course, what’s a festival without day drinking in the streets? There are beer gardens serving the Japanese brand Sapporo beer, reasonably priced at $4 a cup. Alongside the beer garden were rows of food stalls selling typical Japanese street food like takoyaki (balls of octopus), barbecued meats, teriyaki burgers, and bowls of ramen. There were also some cool treats like shaved ice, crazy waffle and ice cream concoctions, and tofu donuts.

We lucked out with great, warm weather for the Cherry Blossom Festival this year, and although the timing wasn’t quite right to catch the trees in bloom, it was a fun street festival that offered plenty of cultural experiences. 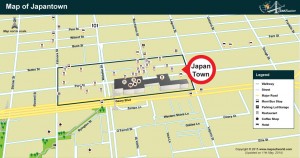