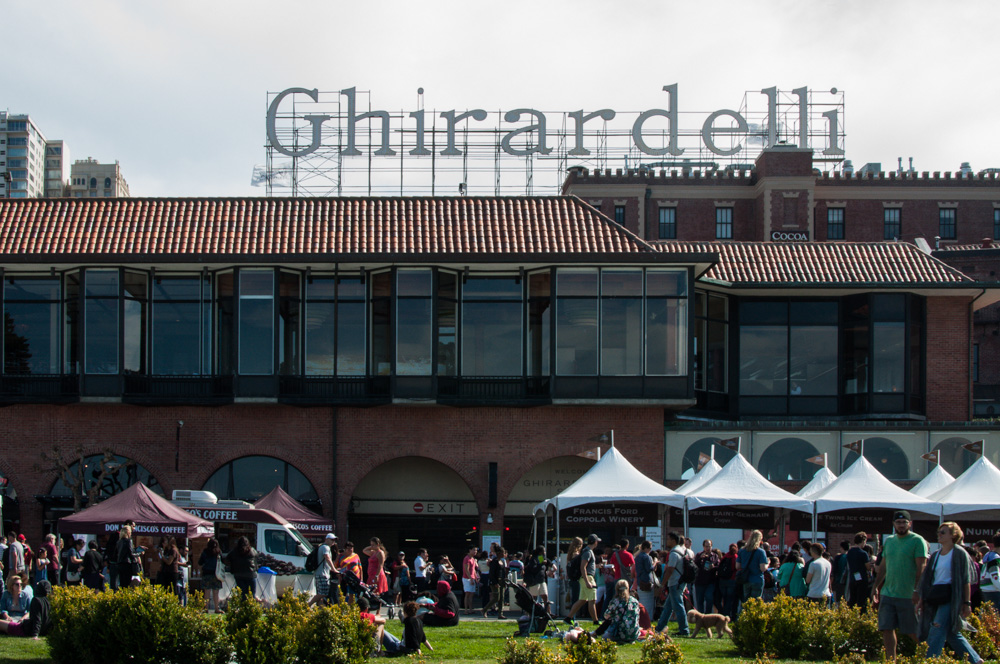 The Ghirardelli Chocolate Festival is an annual event that takes place over a weekend each September in which chocolatiers and other treat-makers offer samples of sweets. In 2015, the 20th annual event takes place on the weekend of September 12 and 13, benefiting the charity Project Open Hand.

For $25 (or $20 in advance), chocolate lovers can purchase a pass for 15 tastings from the 50+ booths set up around Ghirardelli Square and Beach Street. This year, there’s an option to pay $60 ($50 advance for Saturday or $40 advance for Sunday) for an additional ticket that includes access to the Chocolate and Wine Pavilion, where guests 21 years and up can try 12 additional chocolate tastings along with some wines from local wineries, like Wente. Guests at the Wine Pavilion also enjoy a souvenir glass and some live jazz music to celebrate their appreciation of the finer things.

Or you could just skip the ticket entirely and the lines and walk confidently up to the counter and take a sample, and feign ignorance when the volunteers ask for your ticket, and then shrug and motion to your grubby fingers already mushed into the chocolate tart as you make your best “oops!” face and eat your delicious and completely free sample. Smooth, lady. 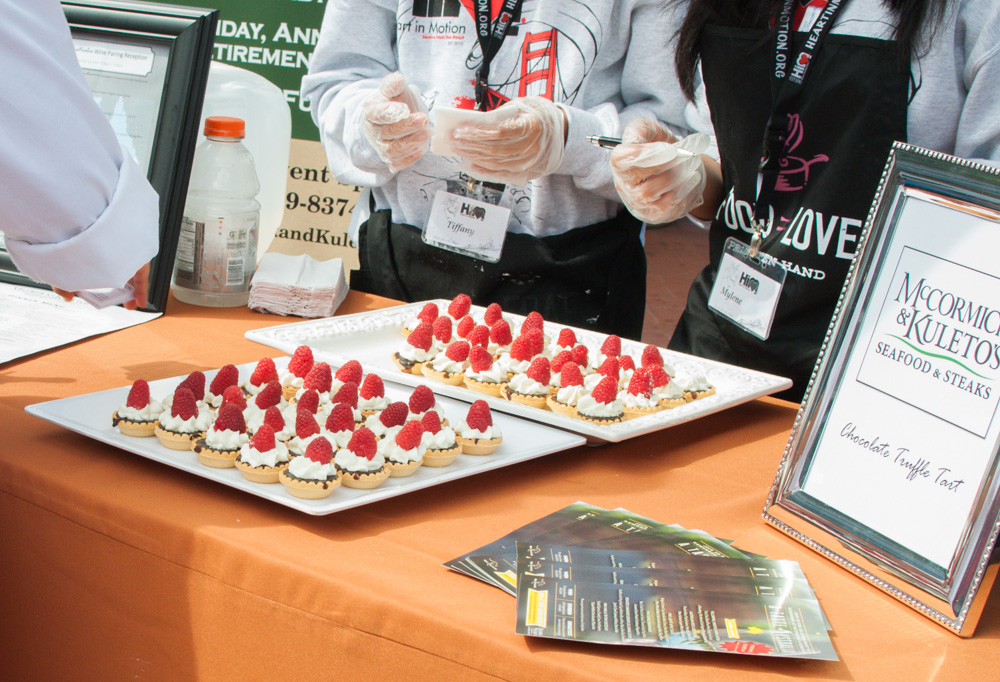 There are events scheduled both days from noon to 4:30 pm, including demonstrations from chefs, chocolate school, and ice cream eating contests. At the 2014 event, those contests were scheduled to last an hour from 2:30 to 3:30 pm, but all of the events (divided by age range) was over within minutes. Because of poor scheduling or planning (they scooped the Earthquake Ice Cream Sundaes for all of the events at once), they had all the contests right away and the show was over quickly. It’s always fun to watch people give themselves brain freeze as they scarf down enough ice cream to feed the entire Duggar family, and with their hands behind their backs.

As for the chocolate tastings, they varied in size and quality, but there were a decent number of vendors to choose between. The booths (including the ticket booth) were set up on the Beach Street, downstairs in front of Ghirardelli Square, as well as additional booths up in the square itself. 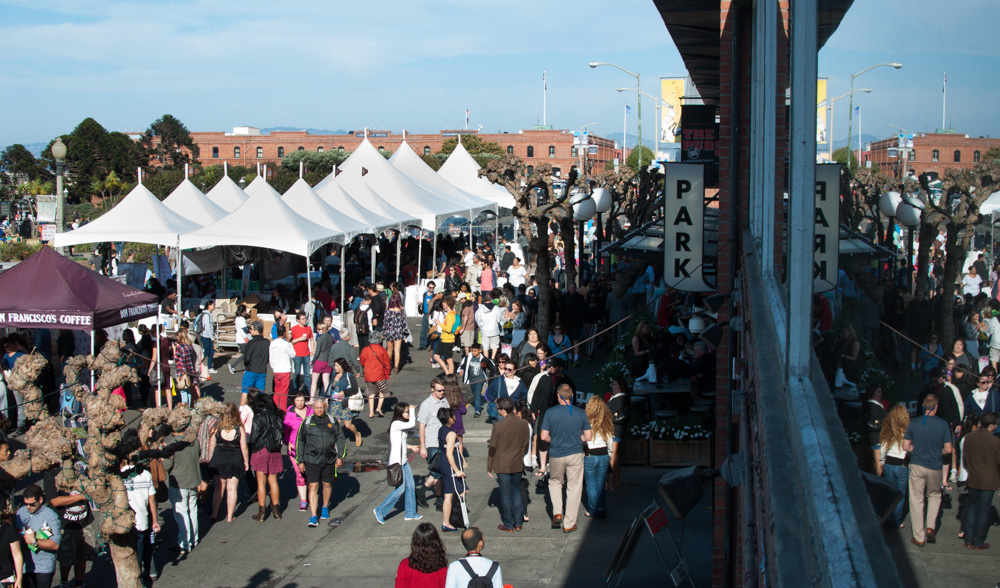 When I first saw the mostly tiny samples, I thought there was no way 15 samples would be enough to satisfy my sweet tooth. When I saw a few people decide to share a ticket rather than purchase one for each of them, I wrote them off as lightweights. After experiencing a day full of chocolate, I learned that even the most dedicated chocoholics probably don’t need all 15 samples. Fortunately, some booths offer wrapped chocolates that you can take home and enjoy later.

Tastings included a great variety of options, from ice cream and shakes to baked goods, coffee drinks, and of course several types of quality chocolate. What I never saw was anyone selling milk, which could have been a lucrative enterprise and would have been much appreciated, at least by me.

Since the event is put on by Ghirardelli, the chocolate company had several sample booths set up at the festival, including the Ghirardelli Chocolate booth, the Ghirardelli ice cream booth, and the Ghirardelli drinking chocolate booth. Oddly enough, the Ghirardelli booths offered some of the worst samples of all the vendors at the festival. At the Ghirardelli Chocolate tent, the samples are the same small squares of various flavors you find in the gift shop upstairs in Ghirardelli Square. They’re also the same ones you get as samples just for entering the store, nothing special. There were many different flavors displayed, and when I first saw the extremely long line for the tent, I thought for sure that they were giving away all of those samples in return for one spot on the sampler ticket. But no, a couple squares of chocolate (or a bag containing three even tinier squares) used up one sample on the ticket. I was incredulous, but even more incredulous at the crazy long line of people who thought that was a good deal. I assume they’d had their fill of chocolate and just wanted to use up the last spots on the ticket for some chocolate to go. The booth for Ghirardelli Ice Cream offered the world’s tiniest sundaes, which the volunteers made even smaller than necessary for the size of the cups with their stingy servings. The only Ghirardelli booth that wasn’t a waste was the drinking chocolate, which was thick and sweet and came in a decent sized portion. 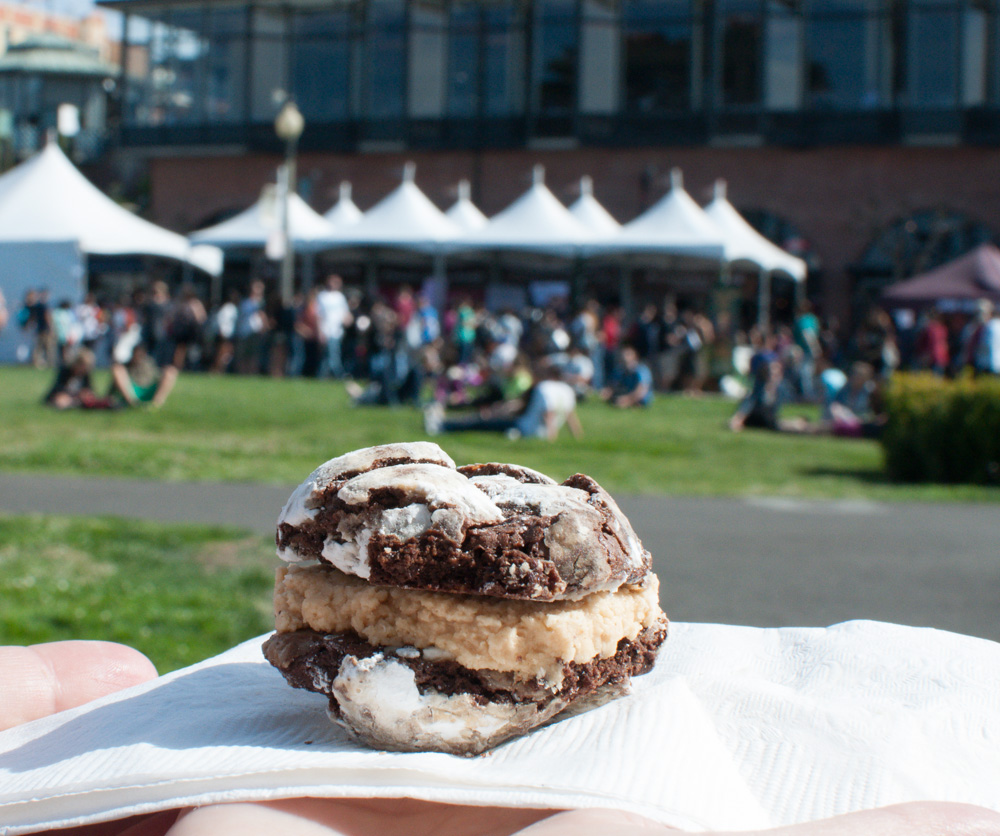 Other desserts included homemade peanut butter cups, which were huge and heavy on the peanut butter, toffee, chocolate bars from an unusual new age chocolatier, pre-made s’mores, which were okay except that approximately 95% of the deliciousness of s’mores comes from the melty marshmallows which cannot be recreated in a candy bar. Another booth offered marshmallows stuffed with chocolate from GÜDFÜD, which incidentally would make for great s’mores. Some of the best samples in 2014 included the tent for Project Open Hand, which offered peanut butter whoopie pies that were fantastic, with their soft, creamy texture and perfectly sweet flavors. There was also a booth sponsored by Torani, which offered a full iced latte with do-it-yourself flavoring as their sample, as a great accompaniment to all that chocolate. Up in Ghirardelli Square were a few more great tents, including chocolate shakes from Lori’s Diner, which was probably the best sample there was (I went back for seconds) and beautiful chocolate raspberry tarts from McCormick’s & Kuleto’s. 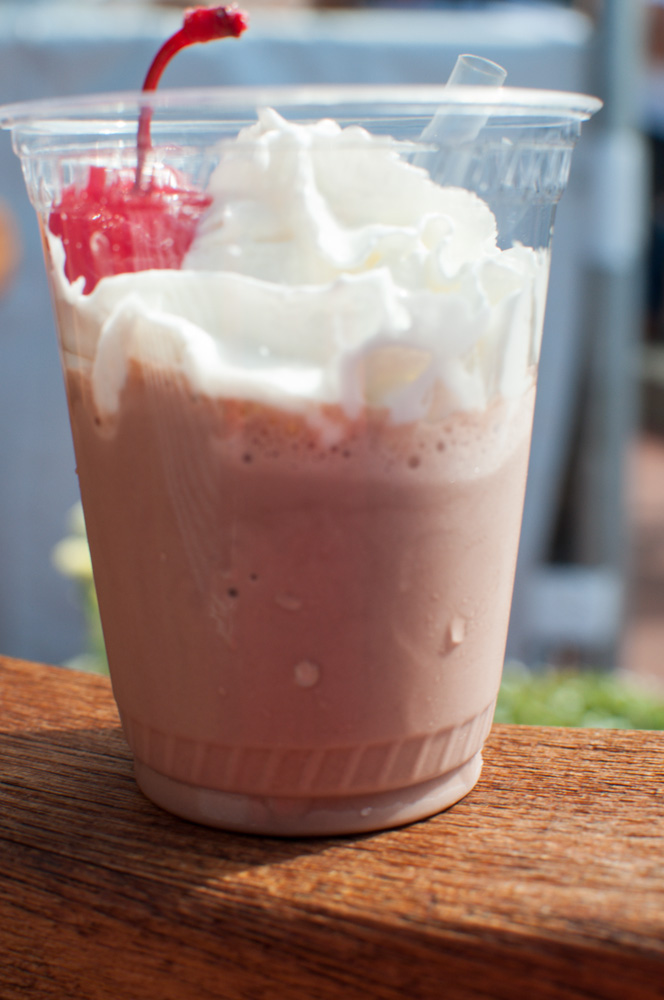 In addition to the many dessert samples at the Ghirardelli Chocolate Festival, there were other completely free samples (without using up a spot on the ticket), like coffee (K-cups or ground) from Don Francisco’s and balsamic vinegar, which wasn’t as out of place as it seems, since they have a chocolate flavored balsamic vinegar. It’s better than it sounds!

Real food vendors were set up along Beach Street for when you’re about to collapse into a sugar coma and need some real food, next to huge speakers blasting music. Finally, there was a silent auction with proceeds going to Project Open Hand, which brings meals to people living with HIV and AIDS.

In all, the Ghirardelli Chocolate Festival was a fun way to spend an afternoon, and while you may not get much bang for your buck, it is a charity event and I guarantee you will have your fill of chocolate. I can now recommend sharing a 15 sample ticket with a friend (though each guest at the Wine Pavilion must have their own ticket and glass). I left wanting nothing more to do with chocolate (for at least the rest of the day).