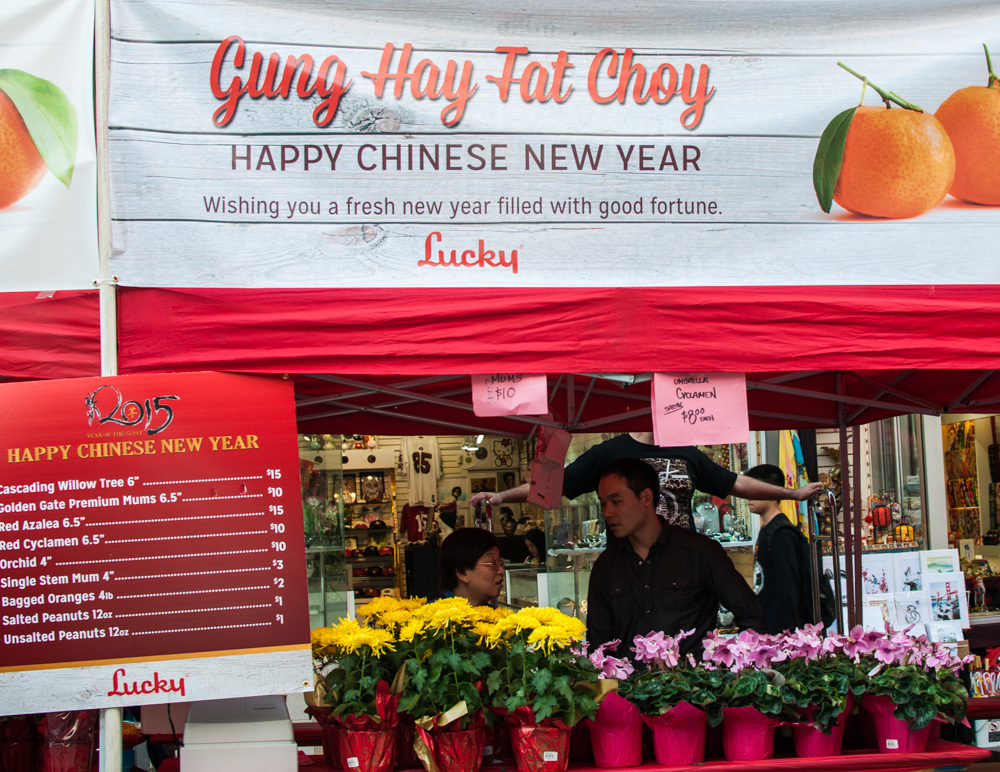 Kicking off the Lunar New Year celebrations in San Francisco’s Chinatown, the annual Chinatown Flower Fair takes place the weekend before the New Year begins. This year, Lunar New Year began on Saturday, January 28 and the Flower Fair held over weekend, January 21 and 22. The street festival is one of a few that take over Grant Avenue throughout the weeks of celebration, and features live performances from local dancers and musicians, as well as a market with flower vendors and souvenirs like paper lanterns and cute stuffed rams to decorate for the year of the ram (or sheep or goat). 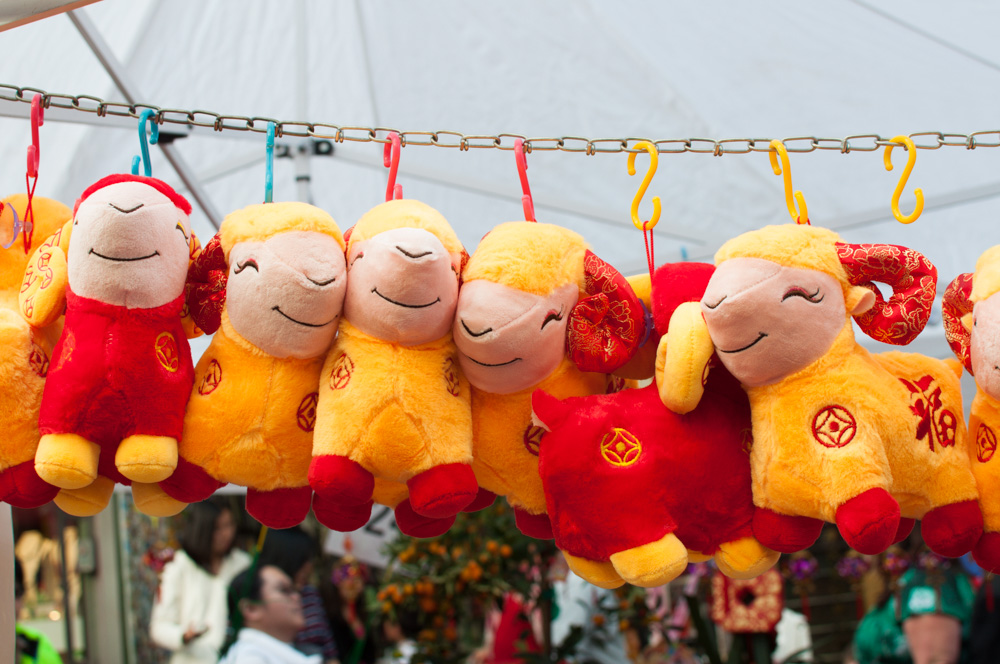 The Year of the Ram

One of Chinatown’s biggest celebrations, the Lunar New Year marks a time of rebirth and renewal. One Chinese New Year tradition is for families to decorate their homes with blooming flowers to symbolize the rebirth of the year, and to bring prosperity and fruitfulness in the new year. Chinatown’s Flower Fair is an opportunity for the Chinese community to prepare for the festivities in their homes. Down Grant Avenue and spilling out onto cross streets throughout Chinatown, vendors sell traditional flowers like peach blossoms, orchids, and chrysanthemums. Also for sale at various booths were lucky bamboo and fruit plants like tangerines and oranges, which symbolize happiness and prosperity. There are other types of goods for sale, from typical Chinatown fare like cheap souvenirs and medicines (what’s the deal with Salonpas in this neighborhood? It’s everywhere!) to red and gold decorations for the new year.

Though the streets were mostly blocked off, some of the cross streets still allowed traffic. Driving in Chinatown always feels a little dangerous, but driving there during a street fair is a whole different level of reckless.

A community stage on a side street hosted cute kids dancing in traditional costumes and other entertainment, while small groups of street performers were set up all along Grant Avenue. The ABCT instrument ensemble were out in full force, but my favorite was this happy guy playing who played the Happy Birthday song or Christmas songs whenever I walked by. He looked so happy the whole time, I couldn’t help but enjoy myself. 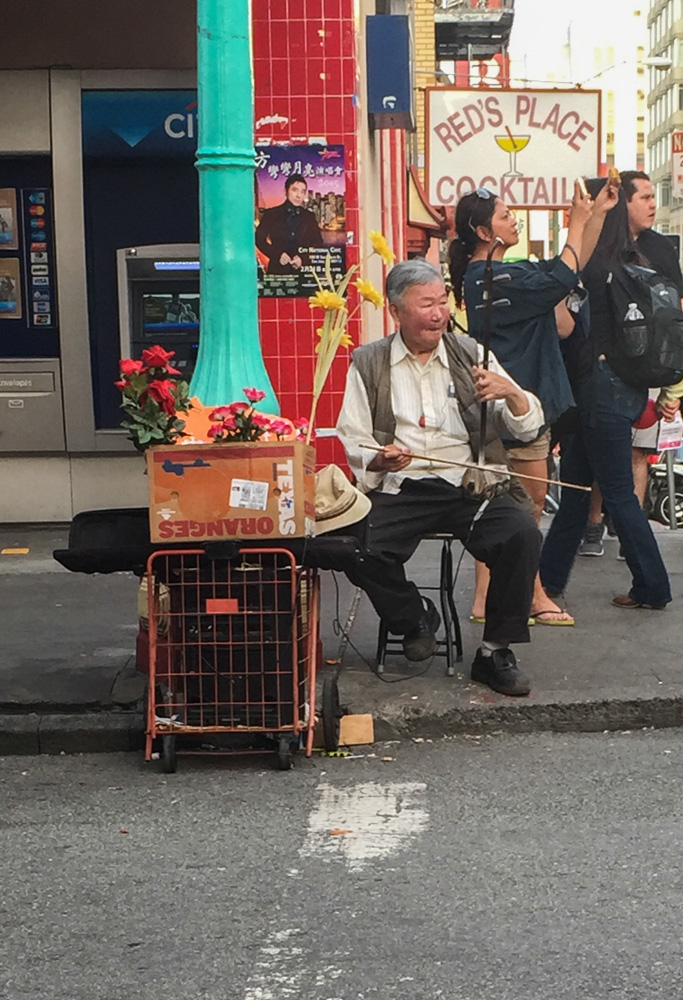 The crowded streets with all the excited energy, bright colors and sights and sounds of Chinatown are the neighborhood at its liveliest, and probably its best. That is, sensory overload.

But the best part, of course, was the food – particularly the unique treat known as Dragon’ Beard Candy (or as the sign read, dragon’s bread candy). I noticed a big crowd around one particular food stand and stopped to check it out. I saw a man in a white lab coat stretching impossibly thin strings dusted with flower, which he then rolled around some nutty crumbs into cotton balls. I’d never seen anything like it, and with no information, I watched the demonstration for a while and stepped aside to let others see. I nearly walked away, but a man walked by loudly proclaiming his delight in the tasty treats to no one in particular. I figured I’d bite (but not literally!) when I asked him about what he was eating. “It’s like cotton candy filled with peanut butter! It’s awesome! Here, have a bite.” He held out a half-eaten candy. He was so enthusiastic and I was so surprised by the offer that I almost took him up on it, but remembered that this friendly man was a stranger and that would be crazy. His description sounded terrible, but his excitement sold me on waiting in that line (or chaotic crowd, rather). At some point, I regretted not taking that bite, as I stood there for what felt like hours waiting to purchase a set of eight small puffs of something I didn’t know existed that morning.

But as usual, the saving grace of standing in these crazy lines in Chinatown, is meeting the others in line and usually learning something. It started with questions from people around us who grew up eating dragon’s beard candy, wondering what made us decide to wait, never having tasted it. Then it turned into a cultural lesson as the woman explained that the candy is at least 2000 years old, and a dying art, though fortunately there was a young apprentice working at this booth behind the old pro. There aren’t many places or people around that still make it, and it was clear from the work of the two craftsmen that this was truly an art that took practice and patience.

The process was fascinating to watch, from warming a small tub of something in the Hello Kitty microwave to dumping it into rice flour, poking a hole into the middle of the gooey puck and stretching it and looping it repeatedly, coating it with flour so it doesn’t stick, until it becomes fine like hair. The threads are cut into short lengths and divided into sections, which are then carefully wrapped around the chopped peanuts and coconut. The fine strands become white and wiry like the hairs on a dragon’s beard.

We also received some tips for eating them, like don’t try to bite them because they’re very messy, and refrigerate the rest at home because they go bad (plus they’re good cold). I took bites anyway, because they’re large and because I wanted to savor them longer, and found out another reason they might be called dragon’s beard candies. With every bite, puffs of powder rose from my mouth like smoke, and I’m Puff the Magic Dragon.

They were as amazing as the man had exclaimed – impossibly light, though chewy, and something like cotton candy and peanut butter, if that could be a delicious combination. The strands became more brittle after refrigeration, and resembled frosted shredded wheat.

Though we weren’t in the market for any flowers, the festival was a nice way to experience Chinatown and the dragon’s beard candy was the highlight of the day.