Bring Your Own Big Wheel 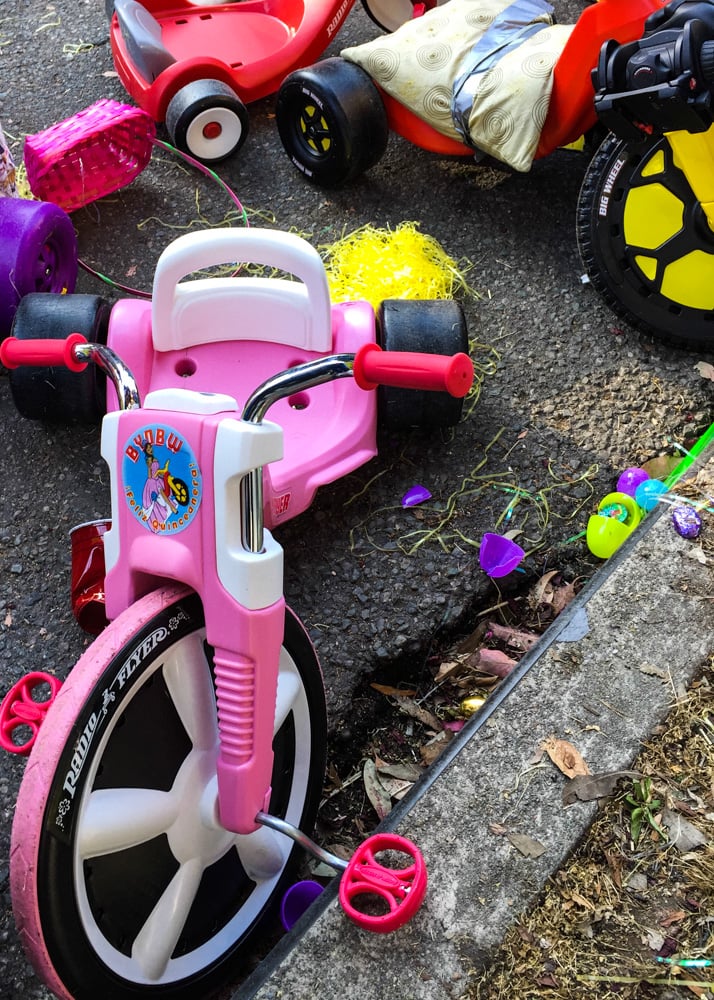 Bring Your Own Big Wheel

It’s the kind of reckless idea a brave kid with no concept of mortality would dream up: racing your bike down the steepest, curviest street in the city. Only, it wasn’t a kid who started it, and it’s mostly adults who race. As we learned from watching Tom Hanks jump on his indoor trampoline in Big, being an adult is pretty sweet because you can come up with crazy ideas and then make them a reality.

Now every year on Easter Sunday afternoon, hundreds of adults change out of their Easter best and into silly costumes, grab their kids’ plastic tricycles, and race down Vermont Street for the event known as Bring Your Own Big Wheel (BYOBW).

Bring Your Own Big Wheel is a chance for people to have a blast while making fools of themselves, with plenty of wipeouts and costumes to keep things interesting. It’s real life Mario Kart, complete with appearances by Mario, Luigi (who had a banana peel hazard floating behind him) and a dude dressed up as Princess Peach. 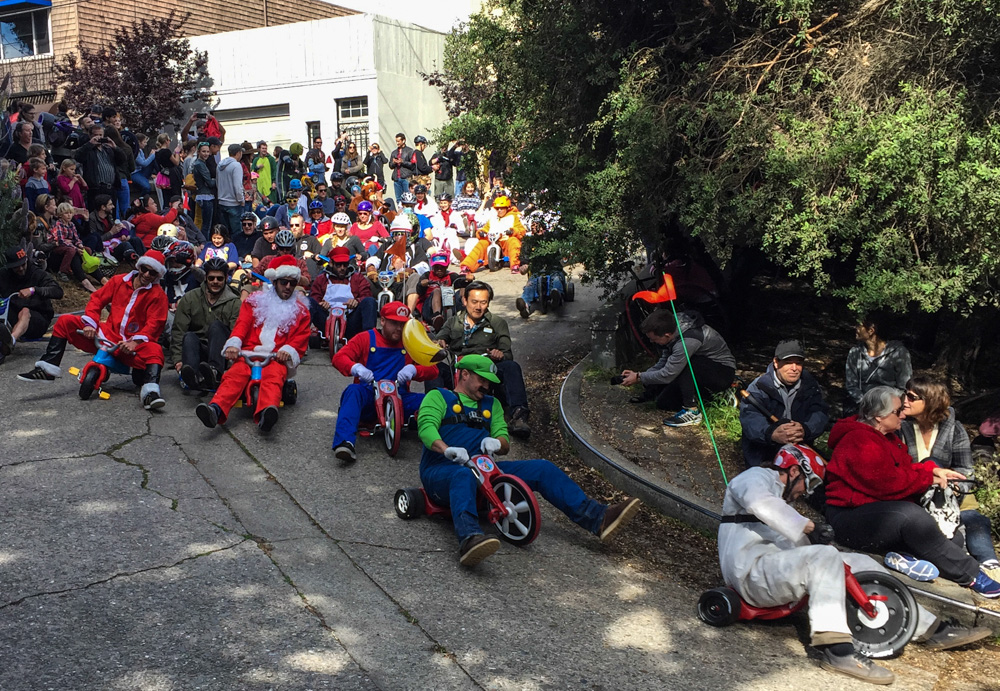 The first BYOBW race, held in 2000, had one racer: creator Jon Brumit, who was cheered on by a handful of friends. Year after year, the race gained popularity and traction; then YouTube came along and the event exploded. In 2008, the event was moved from Lombard Street to Vermont Street, after the Lombard Street residents complained. Of course, I find it a bit silly that the millionaires who decided to live on arguably the most famous street in San Francisco should be complaining about crowds and traffic on their street. I’m still searching for my sympathy.

Now the race takes place on the even curvier Potrero Hill street, which is probably better suited to the event anyway, but it carries on the same spirit of ridiculous, stupid fun. BYOBW has become a family event that welcomes riders and spectators from all over San Francisco to this less familiar part of the city. With no BART stations and few MUNI stops in these parts, even some locals don’t make it out to this way often. I overheard some drunk bro asking, “What street is this again?” For those who do make it out, BYOBW provides lots of laughs and Sunday Fun Day entertainment.

The rules are simple: Bring your plastic bike, which doesn’t need to be a Big Wheel, but no rubber tires or metal spokes are allowed (though I saw a few that slipped through). Make it down the hill first and take home a homemade trophy and all the glory. Participants are required to sign a waiver and register in advance, either online or in person on the day of the race. Participants and spectators are requested to make a donation ($5-10) to keep the event rolling next year and pay for stuff like permits and port-a-potties and hay bales for seats and road barriers.

Most of these rigs have no brakes, so riders use their feet, hands, and sometimes their whole bodies to slow down on the curves, or crash and burn to the delight of spectators everywhere (except for those who did not heed warnings about standing in front of the barriers), losing shoes and wheels along the way.

This year’s event featured two kids-only runs, one at the very start and one at 5 pm, smack in the middle of the two-hour event. Some parents ran down behind their kids, sometimes acting as their brakes with a rope tied to the bike. I saw this method backfire once, as the dad tugged the cord too hard and tipped the bike and kid over. Classic dad. A few brave kids hung in there with the adults and went down again in the regular races.

The adult runs were divided into heats, which seemed fairly organized in the beginning, though less so as racers hauled their trikes back up the hill for another round. The runs seemed to continue endlessly, providing ample opportunity for anyone who wanted to participate or take turns sharing their cycles.

As if full-grown adults riding tiny plastic bikes down a hill with sharp turns wasn’t comical enough, many racers try to top one another with creative costumes. In addition to the Nintendo gang, notable costumes included a gladiator who rode a horse-drawn tricycle, Green Man, and a couple of BART cars. One clever group costume was the group of Pamplonans who created their own Running of the Bulls. For one race, they ran down the hill on foot ahead of the bull (and the rest of the riders) as they tried to avoid getting trampled.

Food was a popular costume theme, with highlights like a pickle, a slice of pizza, and a carrot riding a tiny Oscar Meyer Weinermobile. A bunch of bananas took one run down the hill connected. There were several fast food favorites: a group of In-N-Out employees in uniform, Jack in the Box, whose giant head popped off in a crash and began to roll down the hill by itself, Ronald McDonald and the Hamburglar. There were a lot of adult onesies and several Easter Bunnies, including the creepy and very tall Easter bunny I saw traumatizing kids up at the park earlier (OK, they didn’t seem traumatized, but I may have been – he reminded me of Frank the rabbit from Donnie Darko). 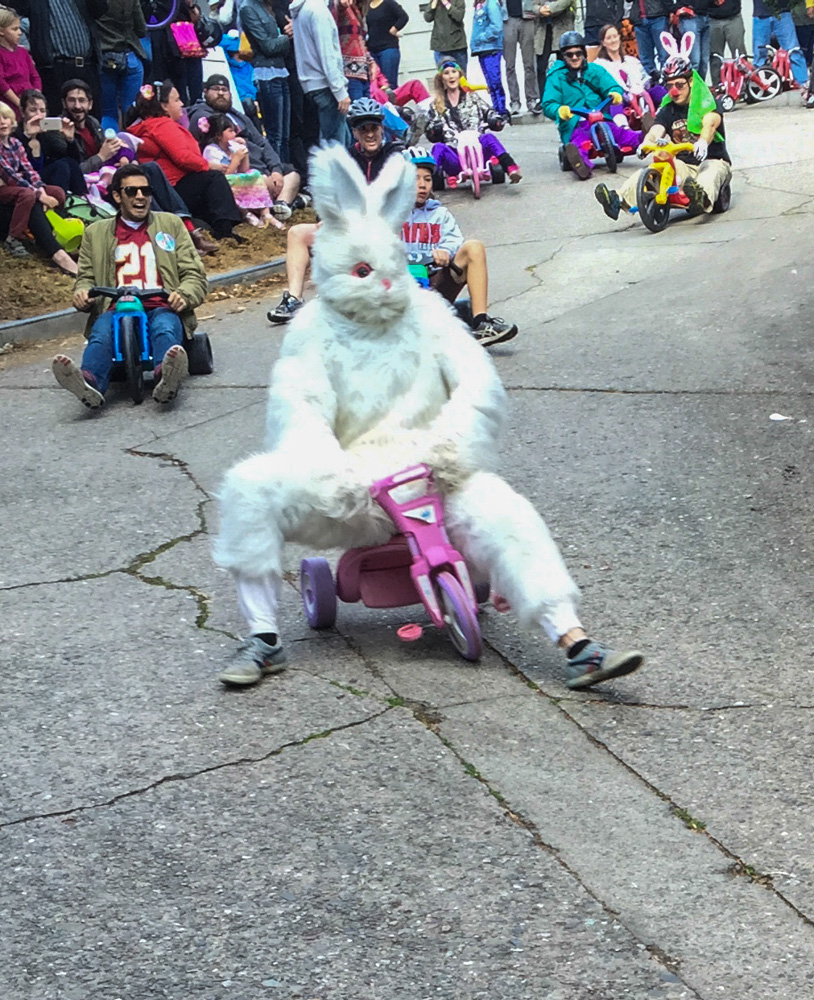 It was a few hours of good, clean, fun for families – although as with any event in San Francisco, there were plenty of people drinking and smoking in the crowd, despite the event’s clearly stated rules that it would not be tolerated. Nothing got out of hand, but it certainly seems like bad form on the part of the attendees, and might cause issues for planning and obtaining permits for future events. Some people also broke other rules, like leaving their broken bikes and trash for someone else to clean up, while others did stupid things, like breaking off tree branches because it was blocking their view or to make a stupid flower crown because hipster girl thought she was already at Coachella. All things considered, it’s clear why the folks of Lombard didn’t want this event there anymore (fine, maybe I’ve found that sympathy).

While organizers don’t really promote the event so it stays a manageable size, it seems like it may soon reach the point where it becomes unmanageable (and less fun).

And while crowds of people racing down a curvy street on (eventually) broken tiny plastic bikes sounds like a recipe for disaster, I never saw anyone get seriously injured – though the numerous wipeouts were very entertaining. The event’s website claims they’ve clocked people hitting 25 mph at the bottom of the hill during the race. Even when someone inevitably eats it in the middle of the street and the race turns into a game of bumper cars, everyone seemed to come out unscathed. Helmets and other protective gear are recommended (and wise) but not required for adults. There were even participants wearing shorts or not wearing shirts or using their bare hands as breaks and I saw no blood. (This might be a good place to point out that I did not participate in this year’s race and I’m pretty sure I would have toppled head first into the bushes and broken my leg – as I write this with an already broken finger. But maybe next year.) 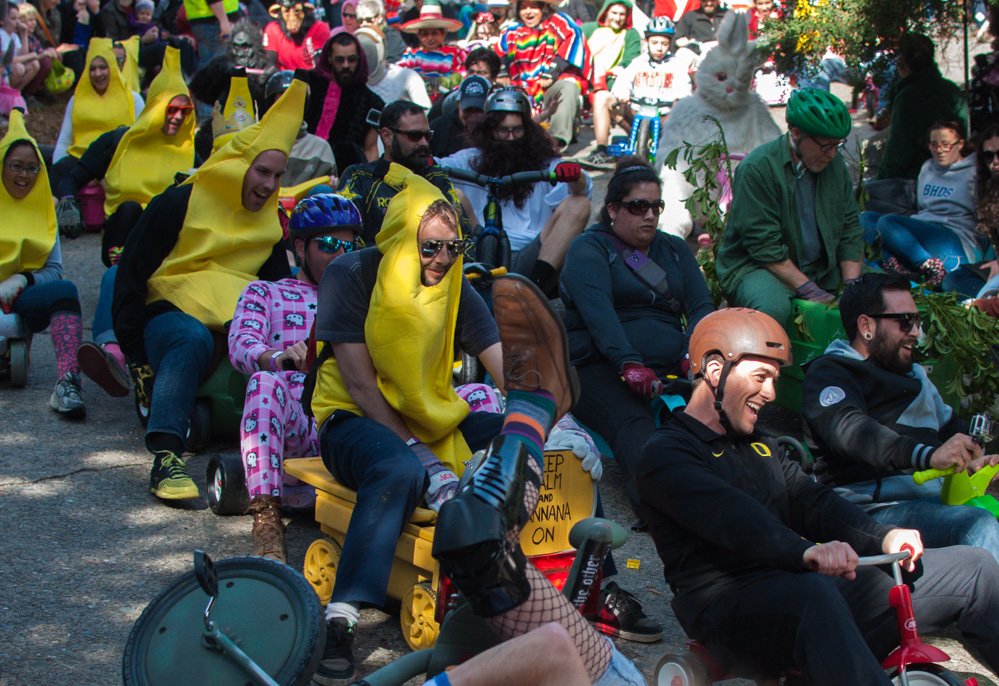 There’s so much happening here

It was an afternoon of shenanigans, with some friendly antics like bike theft mid-race or stealing costume accessories from other riders. I think we all felt like kids again for a little bit. Whether we were brave enough to ride or watched on the sidelines, we got to pretend that this curvy street was a race track.

I’m holding out hope that one day (maybe in 2018, when Easter and April Fools’ Day collide), the street will be colored in chalk to become the real world Rainbow Road.

The Bring Your Own Big Wheel race is an experience you’ll only find in San Francisco. If you ever find yourself in the city on Easter, you know to go where the plastic meets the road on Vermont Street.