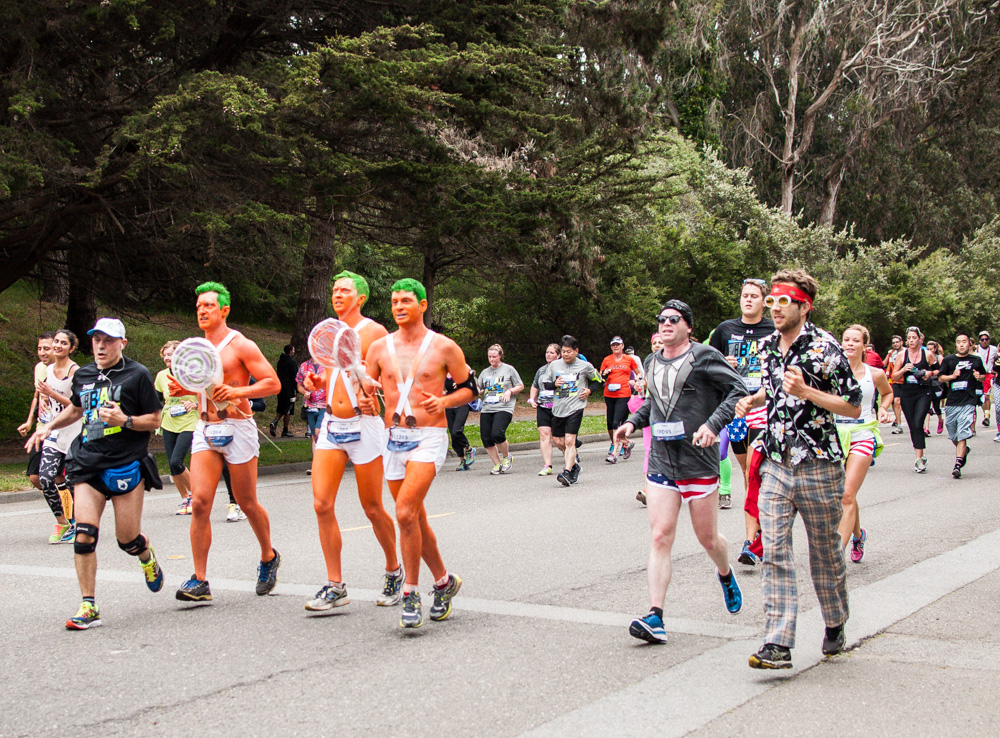 Every year on the third Sunday in May, thousands of runners and revelers take to the streets of San Francisco for the annual Bay to Breakers race. The 12k race begins just blocks from the San Francisco Bay on Howard and Main, and crosses the city, passing the Painted Ladies of Alamo Square, through the Panhandle and Golden Gate Park, before finishing at the breakers of Ocean Beach.

Now in its 103rd year, Bay to Breakers is a quintessential San Francisco experience, half race and half party, filled with fun and festivities in true San Francisco fashion. And by fashion, I mean crazy costumes (or even no costume, if you know what I’m saying). The biggest race in San Francisco (though certainly not the longest), the official website calls Bay to Breakers the oldest consecutively-run annual footrace in the world. It began in 1912 and in the ‘80s, became the world’s largest footrace, though the numbers have dropped considerably since then. 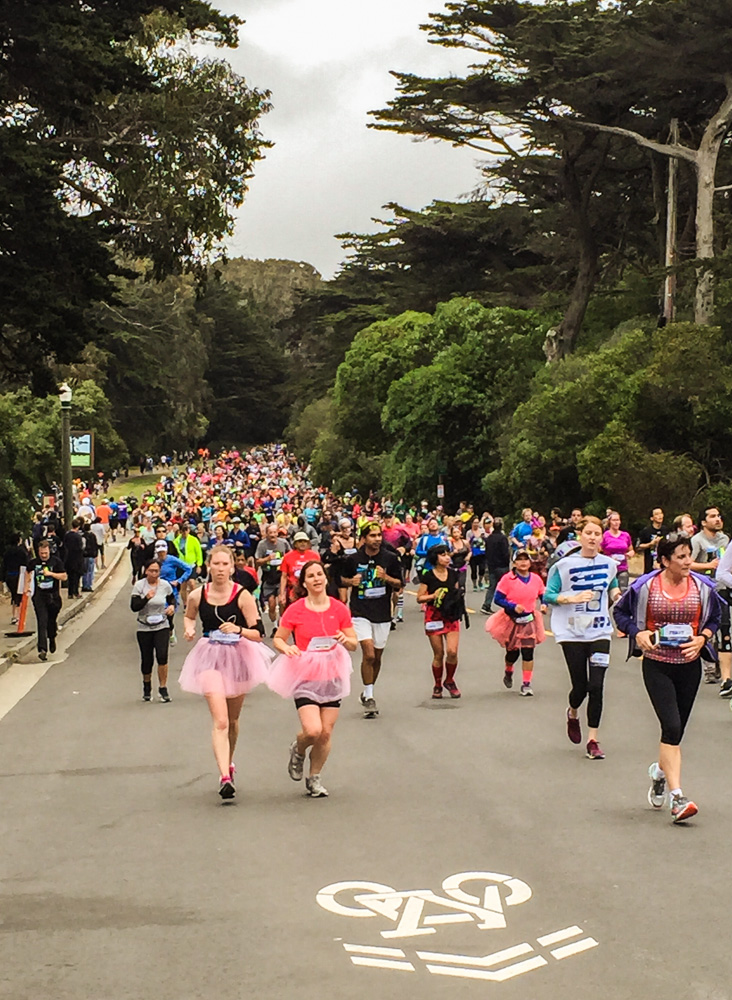 Runners on their way out of Golden Gate Park

In 2015, Bay to Breakers took place on May 17, with 50,000 runners registered to race and many more who joined in the fun, cheering the other runners on from the sidelines or rooftops along the course, or just heading straight for the parties. Registration for the race cost $64, which includes the race bib, finisher t-shirt, and access to the race Expo at Fort Mason Center before the race and the Finish Line Festival, where finishers received their race medals, food and drink for recovery, and some post-race entertainment. However, friends and family who came out to support runners were not able to join the runners at the festival. They were stuck waiting around outside the event, where there were no seats or restrooms. Since this is such a big race, it’s understandable that race organizers would want to keep people out, but other races in San Francisco opened their post-race fun to everyone. 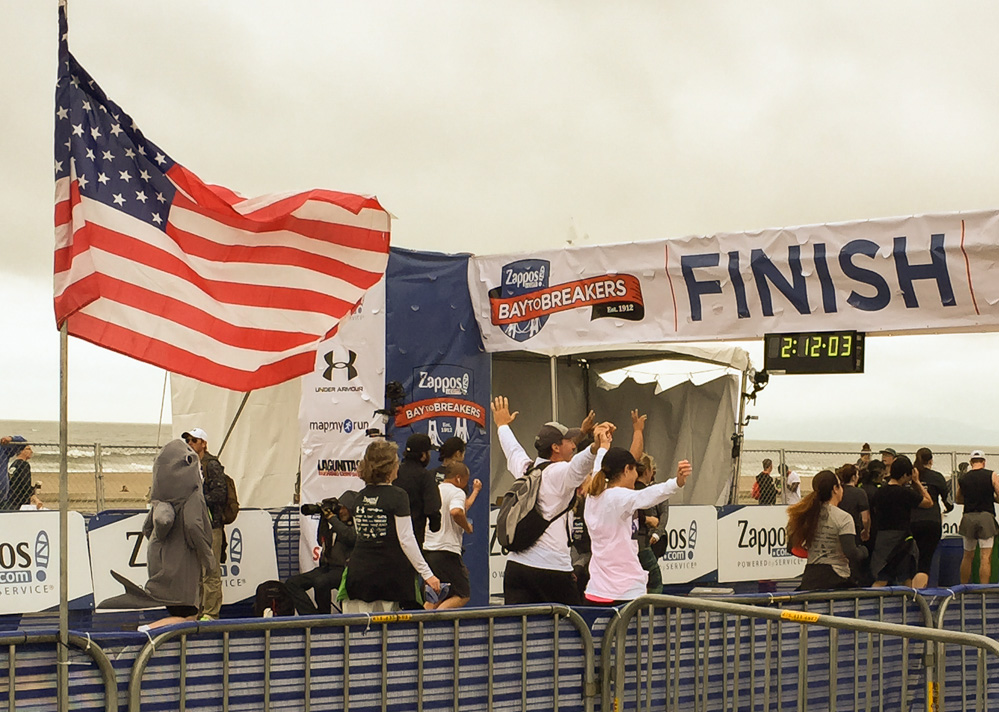 Of course, it’s free to hang out on the sidelines and watch the crazy runners pass by, or head to the block party at the Panhandle and enjoy the event from there. There are also many people who unofficially participate in the race, known as race bandits, who are discouraged by organizers but people always seem to do it anyway.

Bay to Breakers has a reputation of not being a serious race, with many of the participants walking or stopping for drinks or dance parties along the way (and sometimes never finishing). But it wasn’t all early morning drunken debauchery. Starting off the race was the pack of about 40 elite runners competing to win the cash prizes. Winners this year were Kenyans Isaac Mukandi Mwangi and Jane Kibii.

This year, there seemed to be more running and a little less partying, with harsher enforcement of the rules and a ban on rolling bar carts and floats, which in some years made the event more of a parade than a race. Police attempted to stop the public drinking by confiscating and pouring out drinks at several checkpoints along the race. There were 11 reported arrests made at the event, which is surprisingly low considering the masses of people partying at the Panhandle.

There were still the traditional tortillas tossed at the start line, naked runners (who mostly seem to be older men running alone – and it does not look comfortable), day drinking, and creative costumes.

Costume highlights for 2015 included the traditional pink gorilla, snow globes, a whole school of jellyfish, unicorns, troll dolls and pretend-nudes in flesh-colored bodysuits. One of my favorites was a guy in a giraffe costume spotted wandering around the post-race panhandle party, who later joined a whole tower of giraffes (that’s what you call a group of giraffes). The costume contest winners this year (judged by me) were the two girls wearing “the dress.” You know, the one that ruined friendships and blew the internet’s collective mind. I’m sorry to remind you and also sorry that I didn’t get a photo. The runners made dresses that were blue and black on one side and white and gold on the other.

An honorable mention goes to the guy who finished the race wearing flip flops – a true testament to the comfort of Rainbow sandals.

Bay to Breakers is the birthplace of two amazing and creative traditions. First, the salmon who swim upstream to spawn, which are a group of runners wearing fish costumes who start at the finish line and run the race in the opposite direction, weaving through the crowds and creating havoc. The other is the centipede, or a group of 13 or more runners who complete the entire race connected to one another by rope or bungee cords. Though it sounds silly, there’s some tough competition in the centipede race category, though the UC Davis track team who invented it (as a training tool to work on pacing) usually dominates. Centipedes are also an opportunity for creative group costumes, like the group who formed a boxing ring with runners wearing boxing gloves in the middle.

Bay to Breakers is a one-of-a-kind San Francisco event that’s one part serious athletic event, a few parts crazy costume party, another part family fun with many children joining their parents in the run or waiting with family at the finish line. 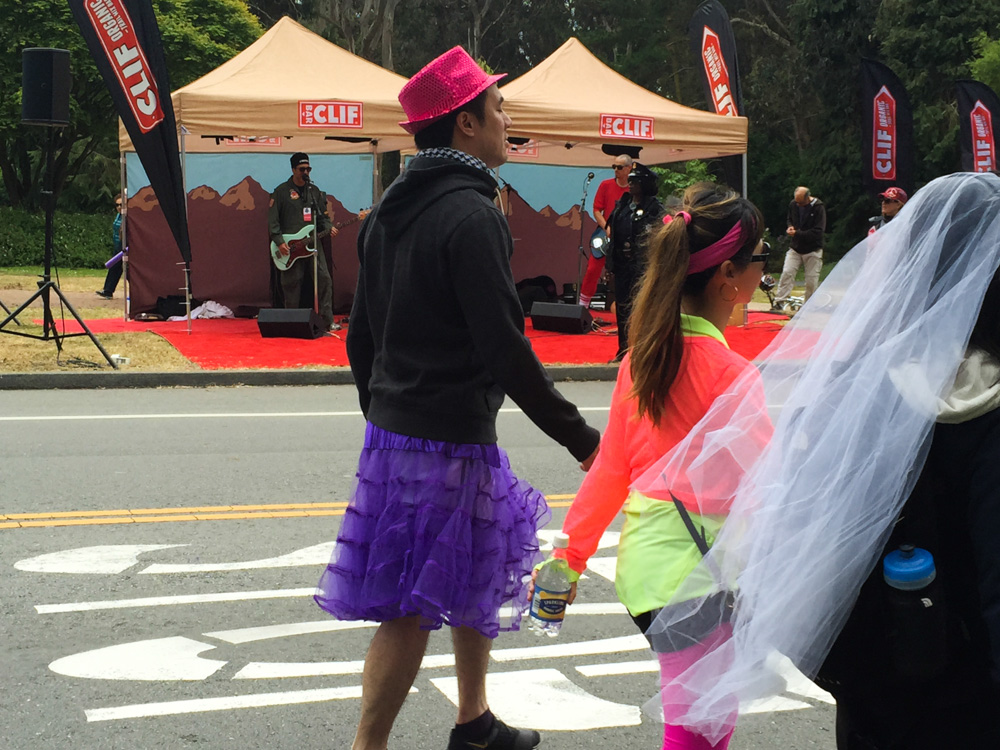 There’s no lack of entertainment here – once you get tired of watching the creative costumes pass by, there are bands with live music and DJs set up with space for dancers to join the party. Popular viewing spots to cheer on runners include the Panhandle, where a huge after-party (and during-party) takes place, Alamo Square Park, and of course, the finish line.