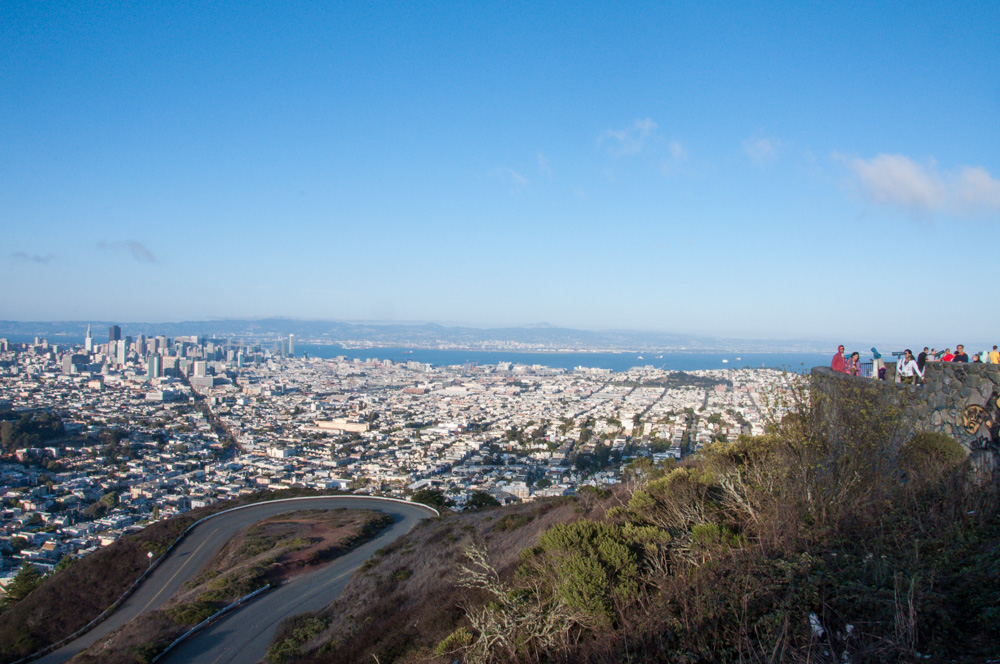 The winding road up to the Twin Peaks overlook

Twin Peaks, One of the best places to get views of the San Francisco, Twin Peaks rise about 922 feet (282 meters) above sea level. After a winding drive up to the top on Twin Peaks Boulevard, though the roads don’t feel all that steep, passing beautiful homes with unique architecture, when suddenly you emerge high above the city.

The two peaks, similar in size and height, stand side by side in the center of San Francisco. They are the two of the highest points in San Francisco, after Mount Davidson. The peaks have been an overlook since pre-Colonial times as an important site for the Ohlone Indians, used for hunting and gathering herbs and berries. Then the conquistadors arrived and used the peaks for ranching, naming them the “Breasts of the Indian Maiden” (“Los Pechos de la Chola”). Real mature, guys. Now, thankfully, they’re just called Twin Peaks, though the peaks also have their own names: the north peak is called Eureka Peak and the south peak is called Noe Peak. 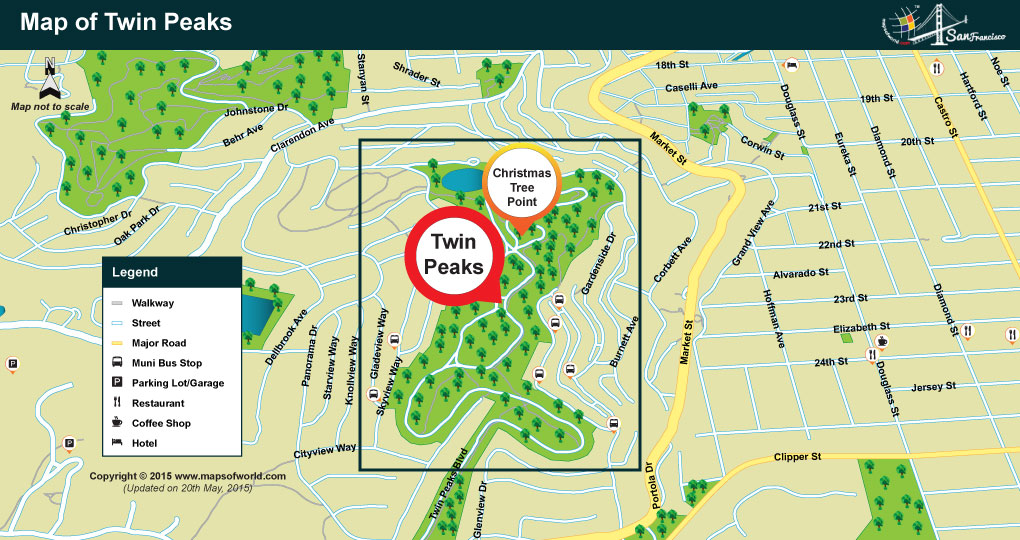 Views from the Hilltop

The sides of the hills are still covered in native flora, including grasses and wildflowers, as well as some fauna. It’s possible to hike up the hills to the very top, where there are unobstructed 360 degree views of the city. 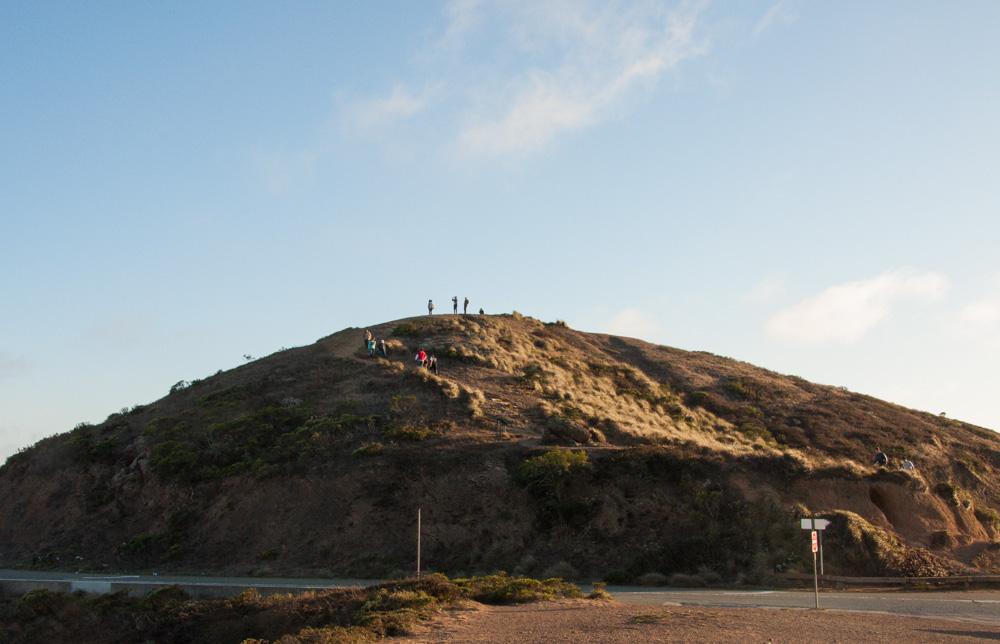 Checking out the views from the hilltop of Twin Peaks

Driving up Twin Peaks Boulevard, the road leads to Christmas Tree Point on the north peak, where a parking lot and vista point are located. From there, visitors can look right down Market Street as it plows straight through the skyscrapers of downtown, leading to the Bay Bridge. 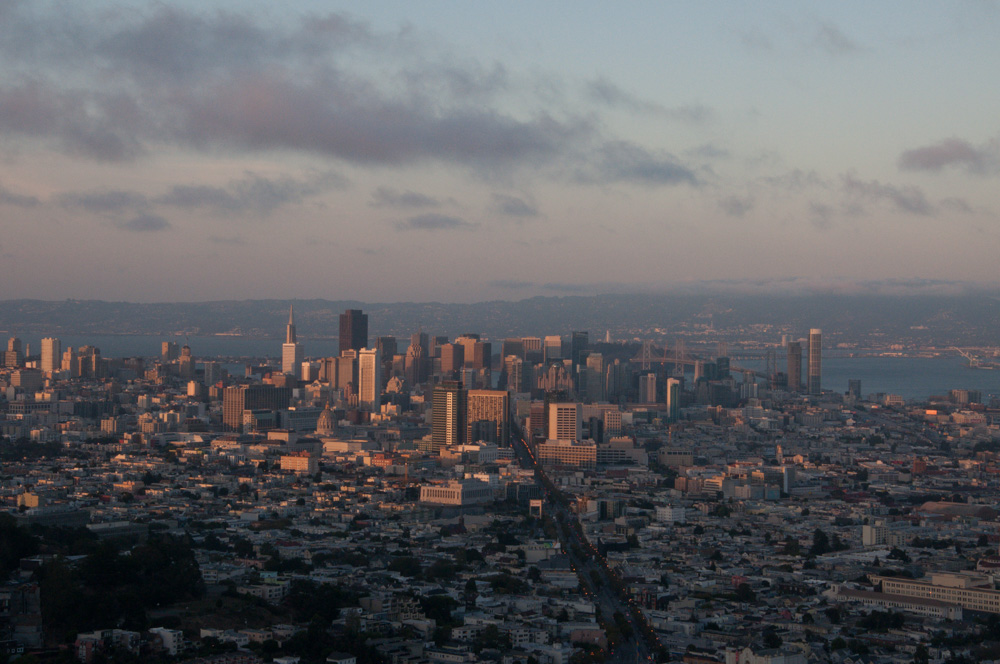 The whole city is visible from the overlook, and even across the bay on a clear day, from the Golden Gate Bridge to Alcatraz, downtown and the Bay Bridge. 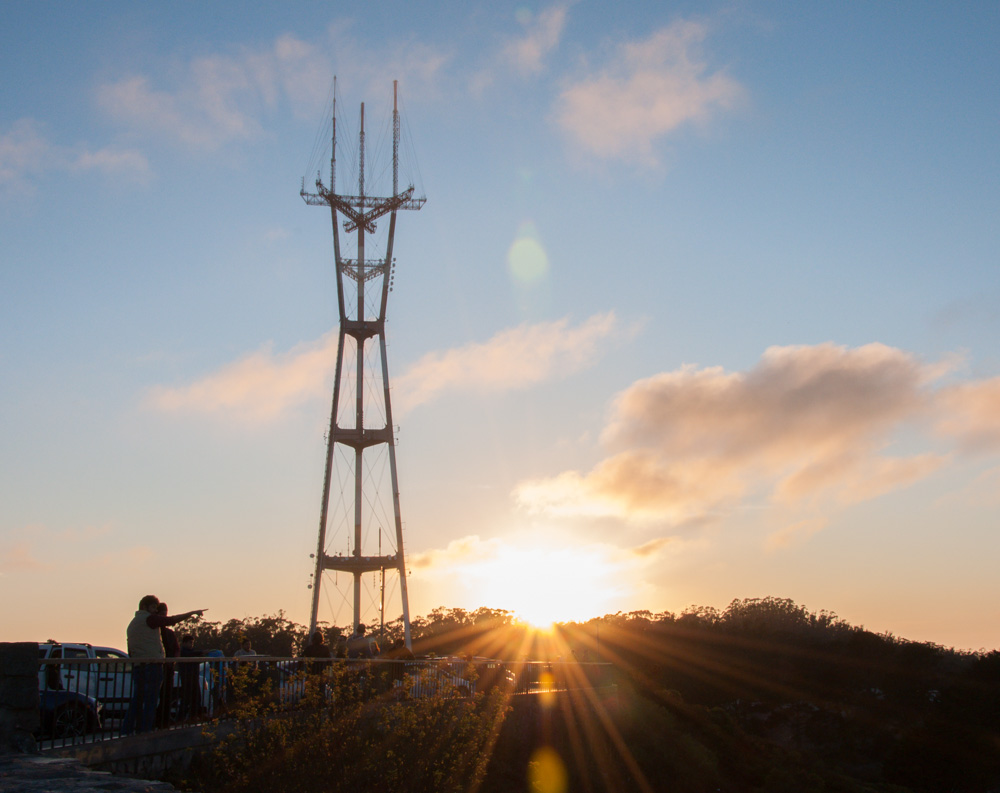 There’s also a clear view of Sutro Tower on another nearby peak, which is the highest point in San Francisco, visible from nearly everywhere in the city and across the bay and an easy way to orient yourself.

Twin Peaks are frequently the dividing point for the fog, which rolls in on the west side, but remains clear to the east. The overlook on Twin Peaks is a popular spot to watch the sun set, as the fog rolls in, blanketing the Golden Gate Bridge for the night, or on a clear night, watching the twinkling lights of the city. However, it gets cold and extremely windy up there, so come prepared (or take shelter in your car).

While I waited for the sun to set, I noticed a couple carrying motorcycle helmets set up a picnic dinner on a bench at the overlook. When they returned to the parked Harley and Vespa beside me, I watched the man hop onto the little Vespa while the woman mounted the Harley. His handlebar mustache should have been my first clue.