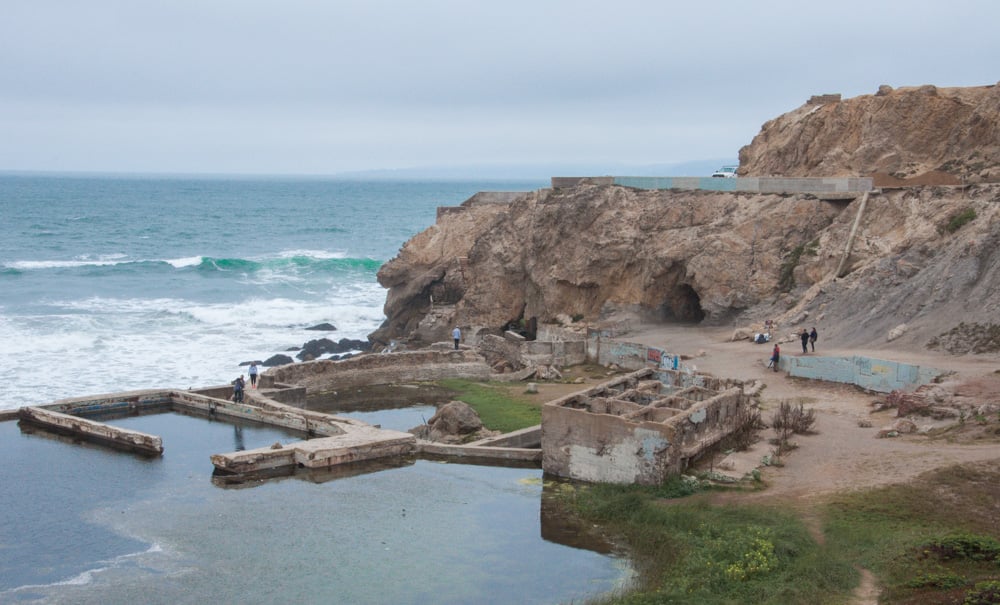 The ruins of the Sutro Baths

Sutro Baths, San Francisco – Many of the greatest cities in the world are known for their ancient ruins that hint at the greatness of the civilization that once stood on those grounds: the Roman Forum, the Acropolis, Machu Picchu, Stonehenge. These ruins tell of rich histories (and sometimes mysteries) with characters of the era whose visions and labor became the legacies we learn about today.

The United States, and especially its Western cities like San Francisco, is relatively young, so it may come as a surprise to learn that San Francisco has its own ruins. Okay, so they’re not ancient ruins like those in Rome, but they do hint at the fascinating history of this sliver of coastline on the western edge of the city.

The story begins with millionaire Adolph Sutro, a visionary with the funds to bring his big dreams to life. Those crumbling concrete walls that divide pools of sea water today were once the first step in realizing Sutro’s water park, complete with a museum, performances, and its own railroad to bring visitors from the city.

Sutro was an immigrant from Prussia whose business ventures in Nevada’s mining industry made him rich. He bought up a lot of land in San Francisco, including these on the western edge of the city, in the neighborhood now known as Sutro Heights. At one point Sutro owned about 1/12th of San Francisco. Sutro Baths also served as the mayor of San Francisco for a few years.

Sutro  was inspired by the Roman baths to build a similar facility in San Francisco, which is somewhat ironic, considering that the Sutro Baths now lie in ruins while the ancient ones remain. 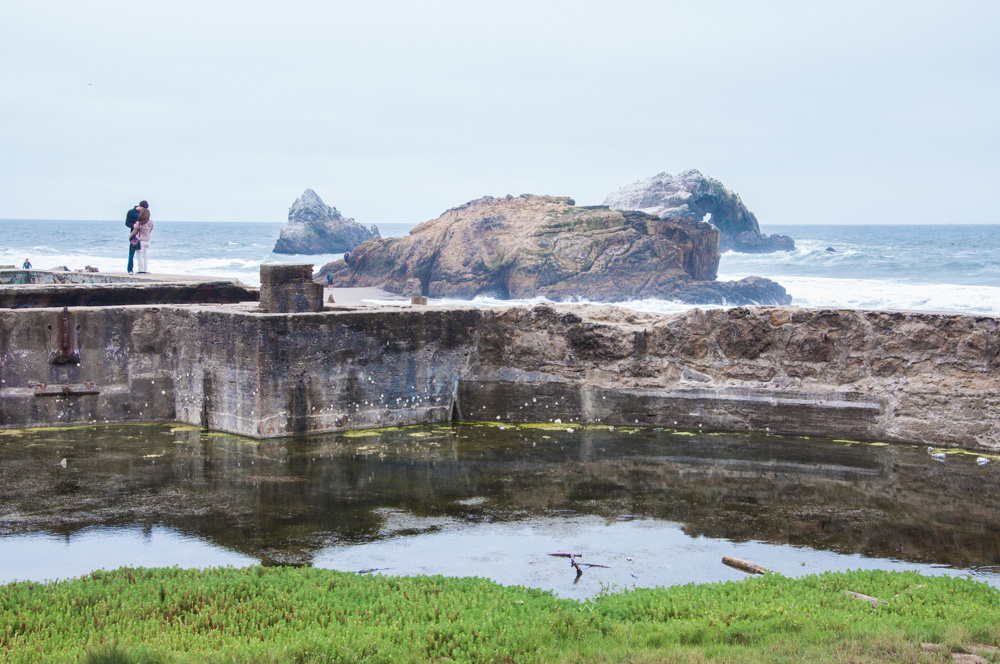 To begin with, Sutro used the natural tide pools at Point Lobos Avenue to create an outdoor aquarium, filled at high tide by a tunnel out to sea. From there, the site was expanded to become the largest indoor swimming structure in the world when it officially opened in 1896. The baths were a safer alternative to swimming in the ocean, and with the glass and steel structure built over the pools, the cold ocean water was warmed in the pools. The end result was seven large pools of varying temperatures from icy cold to warm filled naturally by the ocean, six with salt water and one with fresh water. The Sutro Baths were more than just baths, they were a water park, complete with slides, swinging rings, and a diving board. Alongside the pools, Sutro built amphitheater seating for 7,500 people, where he later hosted swim shows, competitions, and performances, like underwater escape artists.

Fun in the Pool

A few fun facts about the Sutro Baths: visitors had to rent swimsuits (until the 1930s when they were allowed to bring their own) and the suits were made of wool! The styles for men and women were basically the same. When the swimsuits were washed, they weren’t laundered with soap, but boiled in salt water.

Sutro did not stop at building the baths. He added a museum with a random assortment of exhibits, from art to history and mounted animals. There was an arcade at the Sutro Baths complex, and many of the old machines can still be played at the Musée Mécanique now at Fisherman’s Wharf.

Visiting the Sutro Baths today, it’s difficult to imagine the site as a busy water park, filled with woolen swimsuit-clad families. It’s hard to believe that the baths were in use until relatively recently, and there are still plenty of people alive today who once swam there. There’s even some videos on YouTube from some of the performances there, and plenty of stories of first hand experiences.

Two things surprised me about these ruins: first, that the structures were not destroyed by the Great Earthquake and fires of 1906 (but a much later fire did eventually ruin them), and second, that they’re even still around, when most old or dilapidated buildings quickly get bulldozed and replaced with new structures in this densely populated city.

Years after Sutro’s death, the swim complex became less popular during the Great Depression. Despite a brief resurgence in popularity after a renovation by Sutro’s grandson, which included an ice skating rink, the Sutro Baths proved unprofitable. They were sold and the amusement park, Playland at the Beach, was built around the Sutro Baths, with roller coasters and restaurants. The upkeep was too great for the baths, and the new owner shut the Sutro Baths down. The land was purchased by developers in 1964 and slated to become apartments. A fire destroyed the baths in 1966, leaving the foundations that remain to this day.

Sutro’s lands along the coast became part of the Golden Gate National Recreation Area operated by the National Parks Service. The Golden Gate National Parks Conservancy built a nice visitors center on the hill above the Sutro Baths, with parking, restrooms, a gift shop, and a history exhibit where visitors can learn about the area’s one-time glory. From there, visitors can take the trail down to the Sutro Baths (or over to Lands End). Following the path down, there are dirt paths and many stairs (so be sure to wear comfortable shoes).

Today, the remains of the Sutro Baths include low walls that hold shallow pools of water and a tunnel. It’s a scenic spot for a nature walk (and a good workout on those stairs), but I also saw a few groups of friends relaxing on a blanket overlooking the ruins and the ocean. You can practice your balance walking along the walls of the pools or head down to the ocean below the Cliff House. 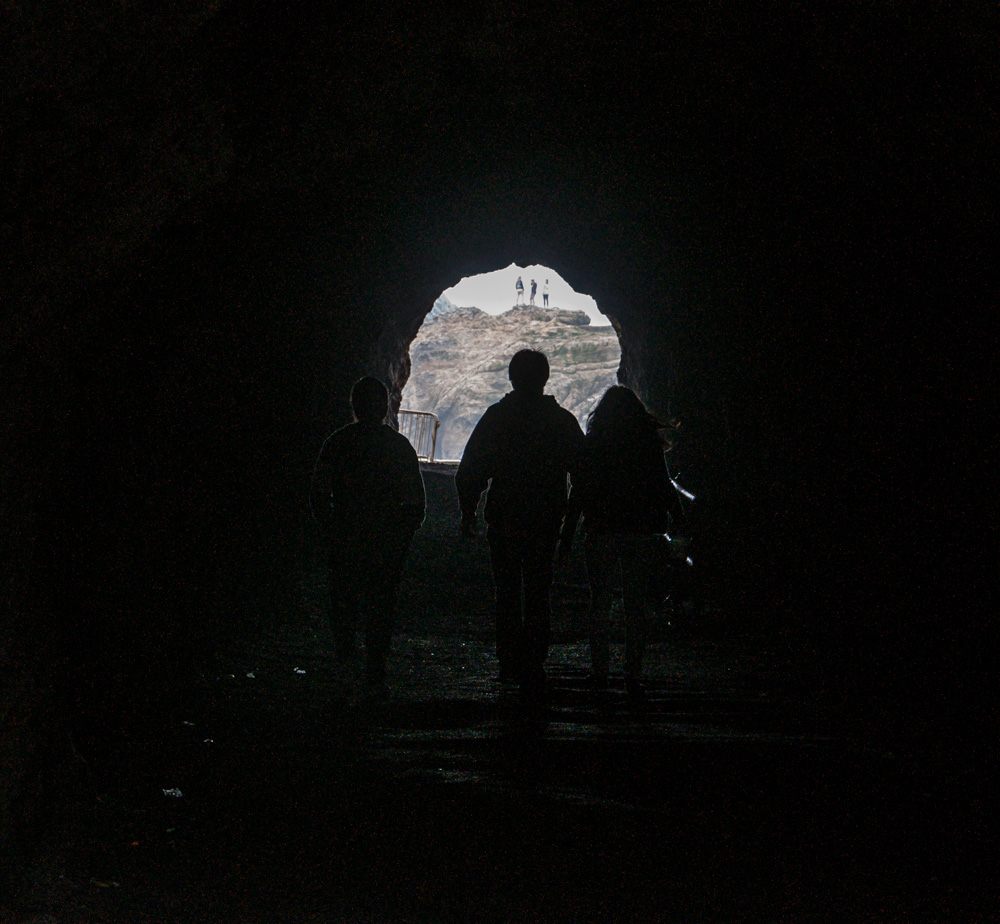 The light at the end of the tunnel

One of the best parts of exploring the Sutro Baths is the tunnel through the cliff. It’s dark and ominous with a small beam of light shining in from the other end. The coarse sand crunches with every step and the ground shakes with low rumbling echoing through the cave. About halfway through at the railing, you can watch the waves crashing through a crack in the rocks. On the other side, if you were able to convince your date to follow you into a dark, secluded tunnel, congrats! It turns from kind of creepy to pretty romantic (unless you’re there when a bunch of other tourists are), with a private view of the ocean and the rock with a heart-shaped hole. Aww. 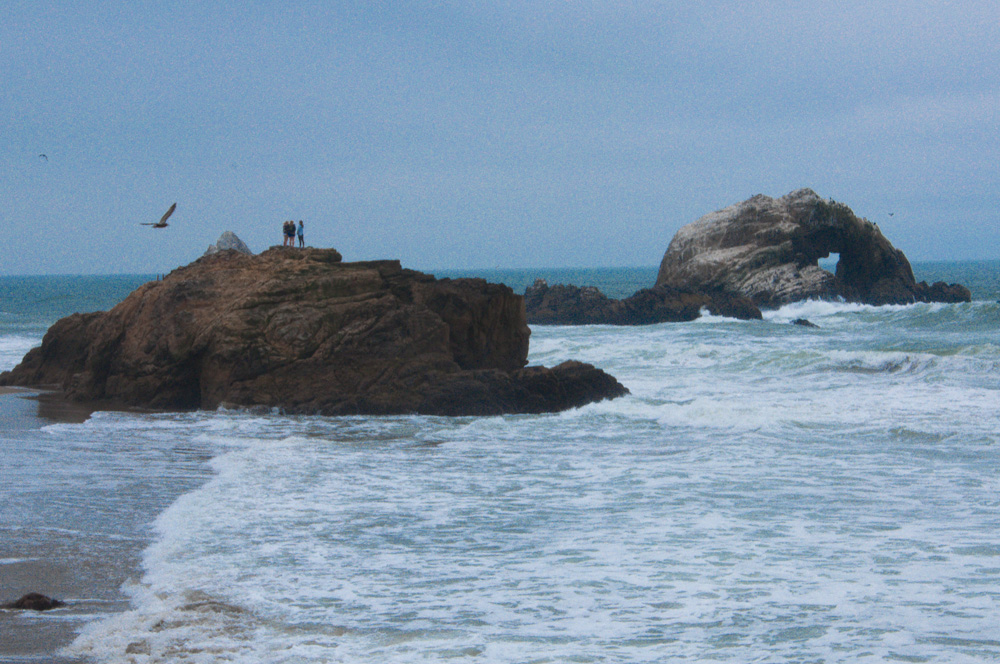 The view from the other side: creepy hideout or romantic hideaway?