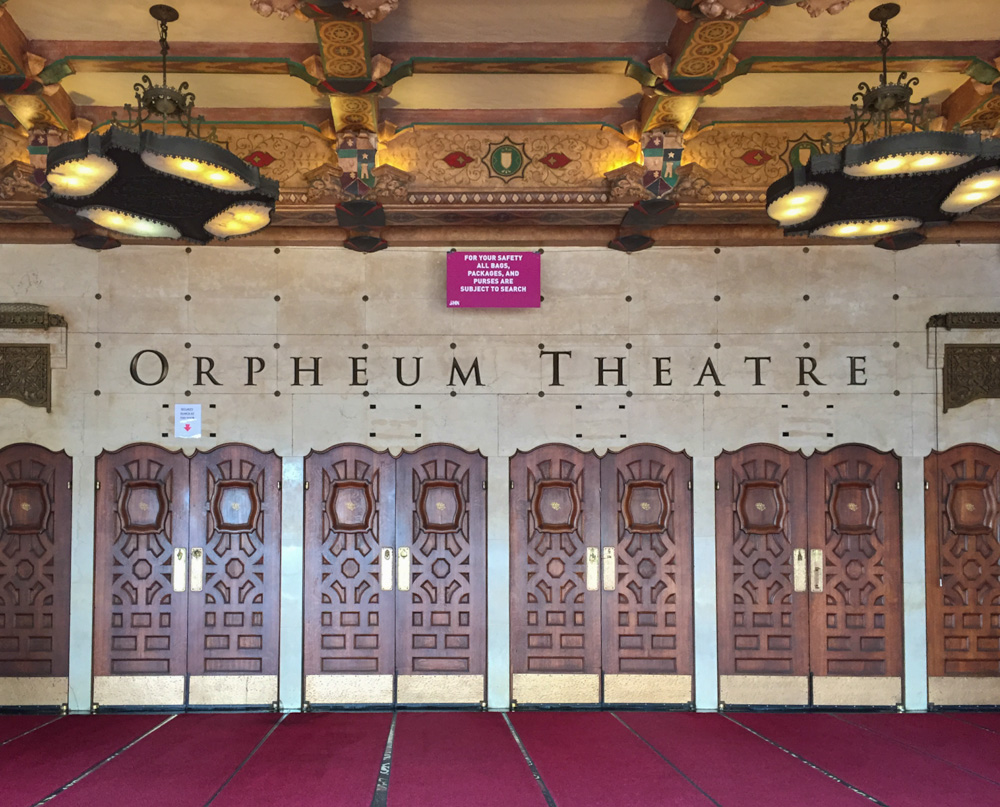 The SHN Orpheum Theatre has hosted Broadway shows, films, concerts, comedy, and a whole calendar of theatrical performances throughout the year. The historic theater was built in 1926 and features grand architecture designed by theater architect B. Marcus Priteca. Located on Market Street, the SHN Orpheum is very close and convenient to the Civic Center BART station. There are parking lots nearby at Civic Center, but public transportation is always preferable. The area around the theater is not particularly nice or clean, the theater itself is beautiful, even on the outside.

In case you’re wondering, SHN stands for Shorenstein Hays Nederlander, which are the names of some Broadway producers who run the SHN production company. The Orpheum is one of three SHN theaters in San Francisco (the other two are Curran and Golden Gate Theaters).

This summer, when a friend was in town visiting and the Broadway show, The Book of Mormon was still in San Francisco. We found tickets on deal sites for seats in the balcony that were about $75 when most tickets cost $100+, and we considered it until we heard about the lottery and decided to try our luck.

I almost don’t want to publicize this because it will increase my competition next time, but many shows at the SHN Theater have a lottery to purchase a pair of tickets a few hours before each show. They’re usually front row seats. Oh, and they only cost $29 each (cash only and don’t forget your ID). Check the SHN Orpheum Twitter to find out whether they’re conducting a lottery for the show you’d like to see.

About 2 1/2 hours before each eligible show, the SHN Theater holds a lottery in which they raffle off tickets for front row seats and sometimes some other unsold tickets. Arrive at the theater early, fill out a card with your name and the number of tickets you need (1 or 2), and then submit your entry. If your name is drawn, you’re eligible to purchase two tickets. Each person who attends can submit one entry, but can buy seats for two.

The odds of winning depend on how many seats are available and how many people show up for the lottery – but from my experience and from others I heard, the chances of winning something are pretty good. Plus they sometimes sell other discounted tickets if you don’t win, but those usually cost more and are not quite as good seats. It’s all a gamble, and that’s part of what makes it exciting.

In the details: each door features a different design

We chose the matinee performance on a Sunday in hopes that hangovers would keep others away and boost our own chances. We arrived promptly on time and while we waited around to submit our entries, we nervously chatted it up with some of the employees. They were very friendly and encouraging, and made the experience more exciting and fun than stressful. One of them pointed out the unique handles on each door to give us something to do. Once we had submitted our cards to the raffle, we had an hour wait until they began the drawing, so we headed down the street to check out the farmers’ market. (There’s also a library around the corner and some coffee shops around for other options to wait it out.)

When we returned, the crowd was huge and we worried we’d never get chosen. As each name was drawn, I joined the applause but my heart sank a little further each time, my cheers a little less enthusiastic. Those same SHN employees were positive throughout, cheering on every single winner. And then, the final name was drawn for pair of front row tickets – and we didn’t win. I was momentarily devastated, but my hope was restored a moment later when they explained they had some other tickets to raffle off. Finally, a few names in, I heard my name. I really felt like I’d won something, even though realistically I had only “won” the opportunity to buy something. But whatever – there was a crowd cheering for me as I walked up to show my ID and buy my tickets. And those cards must have not been shuffled very well, because immediately after that, my friend’s name was called. We skipped off to brunch feeling like winners.

A few hours later, we returned to the SHN Theater to watch the show. I was still sipping on my latte, so while we waited to enter the theater, we checked out the ornate details in the lobby. We saw the beautiful ceilings and carvings, and checked out the bar and restrooms. The bar offers some expensive and overpriced snacks and drinks. Candy or even a bottle of water will set you back about $4 and alcoholic drinks like wine and cocktails are well over $10 per glass, and more if you actually want to drink them in the theater.

The women’s bathroom is a little strange, because once you’re inside, there’s a small regular-looking restroom, but then there are stairs leading down to another.

As I’ve noticed other times, people don’t seem to get dressed up to go to shows anymore. I guess that means you can dress how you please, but I urge you to take this opportunity to class it up and enjoy a fancy night out – you just might enjoy it even more. 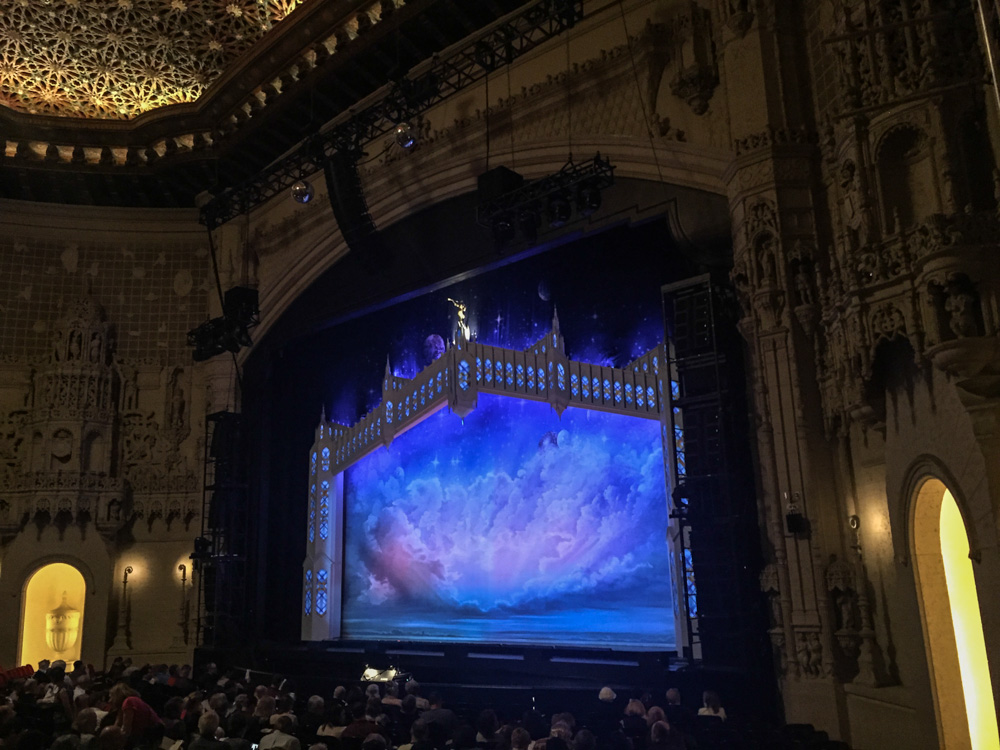 My seats were orchestra level but way off to the right side. I had no issues with visibility from where I sat. There are three levels of seating at this theater, but I think this helps rather than hurts. Those seats may be a little higher, but they have a closer, unobstructed view.

Another note about choosing seats: odds are seated next to one another on one side, evens on the other, so seat number 1 will be right next to seat 3. So be careful when purchasing seats for a group, because you may be split up if you’re not careful

The seats aren’t huge, but they are a bit larger than others my butt has tested (like the War Memorial Opera House), but they are lacking in leg room. The acoustics were great, the temperature was fine and the show, of course, was entertaining.

Upcoming shows in the 2015 season include: The Phantom of the Opera, Once, If/Then, A Christmas Story, Dirty Dancing, Cabaret, Hedwig and the Angry Inch, and many more.