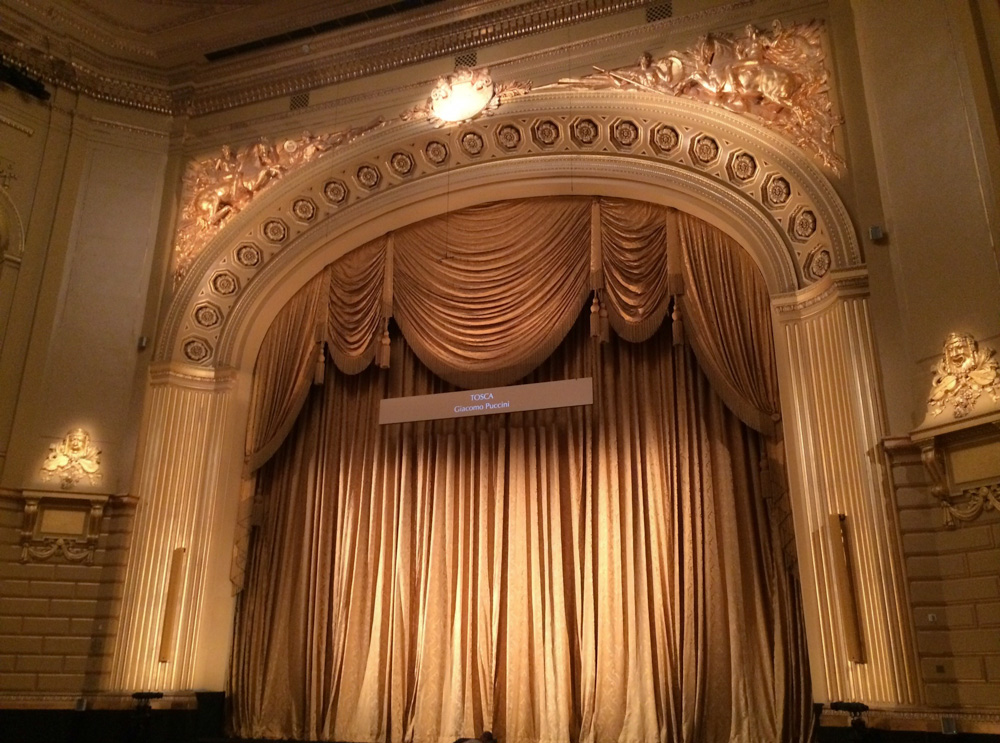 The San Francisco Opera is housed in the War Memorial Opera House near City Hall. Featuring incredible architecture inside and out, the Opera House is grand and old, and built in the Beaux-Arts style, an uncommon style for the region.

Founded in 1923 by Gaetano Merola, the San Francisco Opera House has been in its current location since 1932, where the first opera performed in the new building was Tosca, which happened to be showing when I visited. The building’s architecture was designed by Arthur Brown Jr., the same person who designed other San Francisco monuments, like Coit Tower and the nearby City Hall. 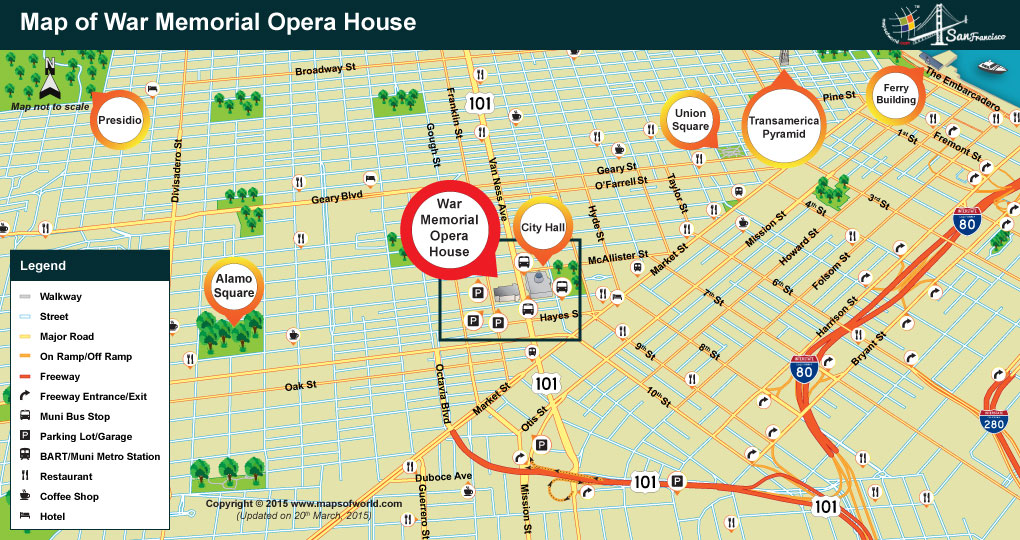 The San Francisco opera season runs from September to July, with 10 different operas and a total of 75 performances. The opera house also serves as the venue for other performances, including Shen Yun and the SF Ballet. In fact, the War Memorial Opera House was the venue for the first ever Nutcracker performance in the United States.

A night at the San Francisco opera is a great excuse to put on your best, but I saw attire ranging from jeans and a t-shirt to sparkly ball gowns and tuxedos. Since most of us don’t have too many opportunities to get fancy, attending the San Francisco opera is a fantastic opportunity to feel like a celeb at the Oscars. There’s even a tiny red carpet.

Beginning two hours before the show, a buffet dinner is offered in the basement, while snacks and sandwiches are sold at the Patina Café Express and Dress Circle Café and drinks are sold at several bars around the venue before the show and during the intermissions.

Before the show, my friend and I explored the venue, admiring the ornate ceilings and enormous mirrors (perfect selfie mirrors) and spent some time watching the fabulous gowns stroll by.

We saw a photo op in front of a large depiction of [the San Francisco opera house?] and asked a man walking past if he would mind taking our photo. We didn’t notice at first that he was dressed in a tuxedo, but after he took a photo for us he got to talking and revealed that he was a member of the orchestra. When he learned that it was our first time, he spoke vivaciously about the San Francisco opera house and the performances and we became even more excited for the show. He pointed out the beautiful art deco chandelier, and gave us an insider tip with one of his favorite parts every evening: if our seats offered a view of the chandelier that hangs over the audience, be sure to look up when the show begins and watch as the lights spiral out in a brief, elegant light show. 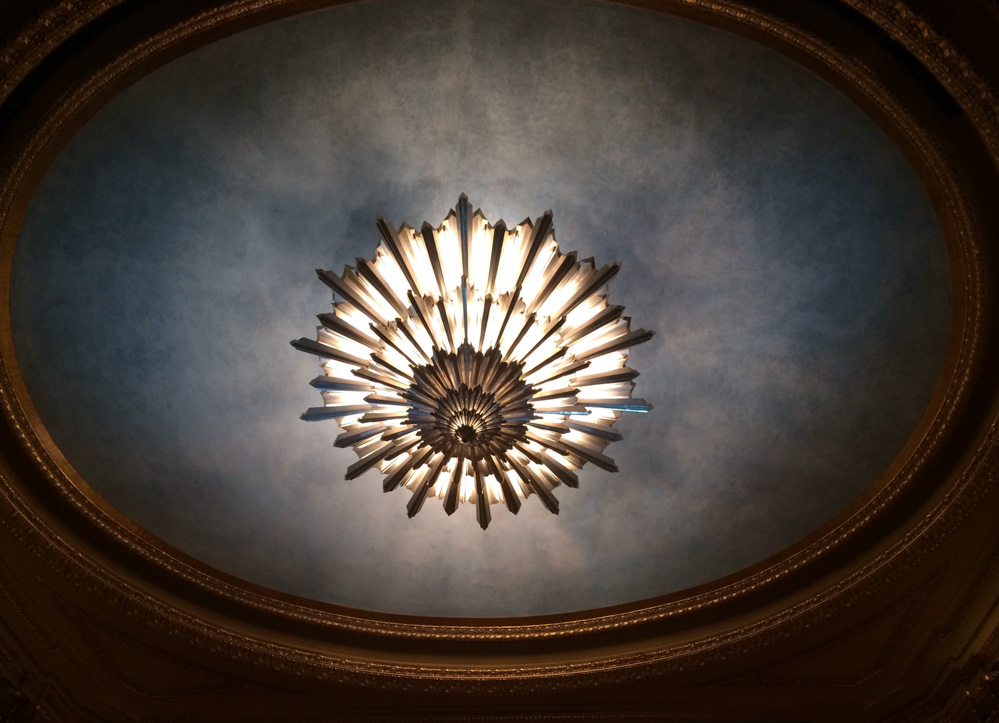 Our seats were at the back of the orchestra ring (where we unfortunately could not see the chandelier). Behind us was the standing area, where people stood throughout the entire performance, leaning against the short wall along the back row of seats. I can’t imagine that was a very comfortable way to experience the show, but the tickets are much cheaper so I suppose it’s a good way to watch the performance and have a fun cultural experience on a tight budget. However, since the show lasts a few hours, I can’t recommend that option personally. The velvet chairs were quite narrow with limited leg room, but were otherwise comfortable, with 3,200 seats in the house.

Above the stage and in a few other locations around the venue were the Opera Vision screens, which seemed to be visible everywhere except the front rows and offered supertitles so everyone could understand what the performers were saying. It was useful and definitely made the experience more enjoyable and accessible.

During the show, there were two intermissions. During the first intermission, the audience was invited to stick around inside the theater to watch the set change happen on stage while the show’s director came on for a Q&A session. He offered the numbers: There were 40 stagehands to deal with the props, 60 people made up the orchestra and there were 75 performers on stage, 8 of which were principals. There were 18 dressers to help with costumes, 11 wig and makeup artists, and 53 wigs. There had been 68.5 hours of rehearsals for the performance, 12 of which were on this stage. He explained what supernumeraries are (extras) and explained some other theater terms for those of us who may not be familiar with them. It was a neat way to get behind the scenes experience, and made it all the more accessible. They even encouraged audience members to take photos in the theater during the intermission and post them to social media. I liked that the San Francisco opera directors sought to make the experience of attending an opera less stuffy. While some might say it takes away from the high-brow experience of attending an San Francisco opera, I think it’s a good effort toward keeping the genre relevant in modern times. The San Francisco opera itself has not changed, it’s just been made somewhat more relatable to a new generation. 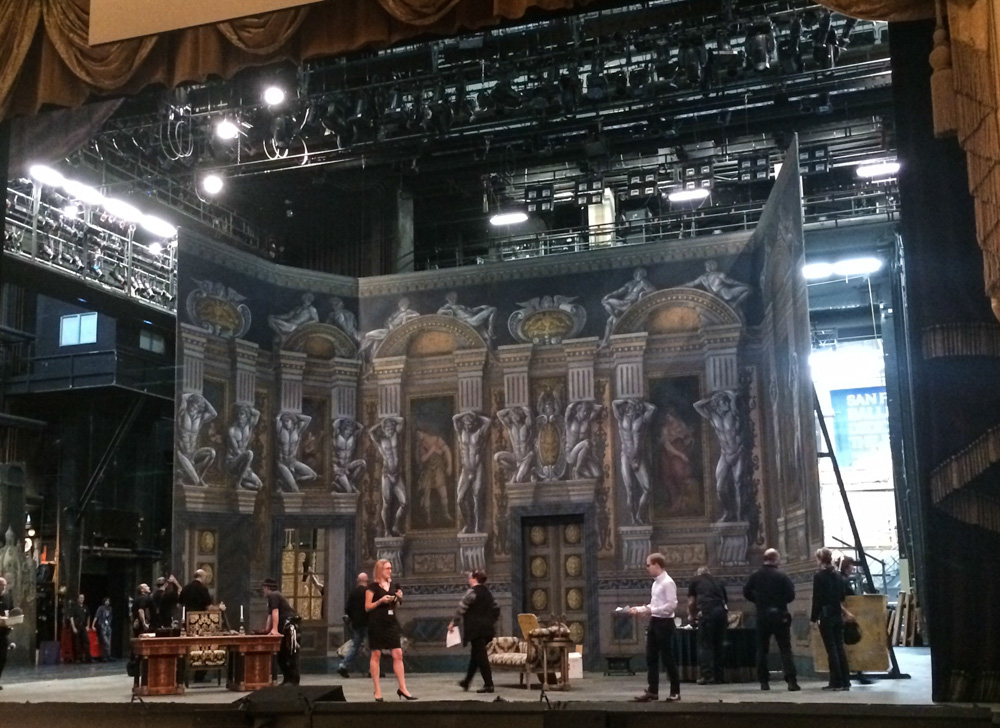 Intermission Q&A while the set is changed

I thought the show was beautiful, though sad as operas usually are, and well performed by everyone, though I’m not an opera aficionado. The sound was great and the voices were powerful. The orchestra was on point, and the somewhat minimalistic sets left something to be desired, but it didn’t detract from the show for me.

As we walked out in the mass of opera goers headed for BART, a woman behind us critiqued the performance in her intellectual accent, criticizing the sets and some of the performers, and how they compared to those at a show she’d seen in some other city. Portland, I think. And then we walked past a drug-fueled brawl outside a rave at the Civic Auditorium and her complaints disappeared into the crowd.

There’s mostly street parking at metered spots around the San Francisco Opera House, but since most operas begin in the evening, parking at these spots is free. There are a few parking garages, notably the Performing Arts garage on Grove and Gough, which is conveniently located and offers flat rate parking (typically $10-15 for the evening). Still, the parking options are limited and the San Francisco opera house is a short walk from the Civic Center BART station, so I recommend BART as the best option.

Students can purchase student tickets at a substantial discount on the day of performance. Call ahead for specifics, and stop by the box office to purchase them.