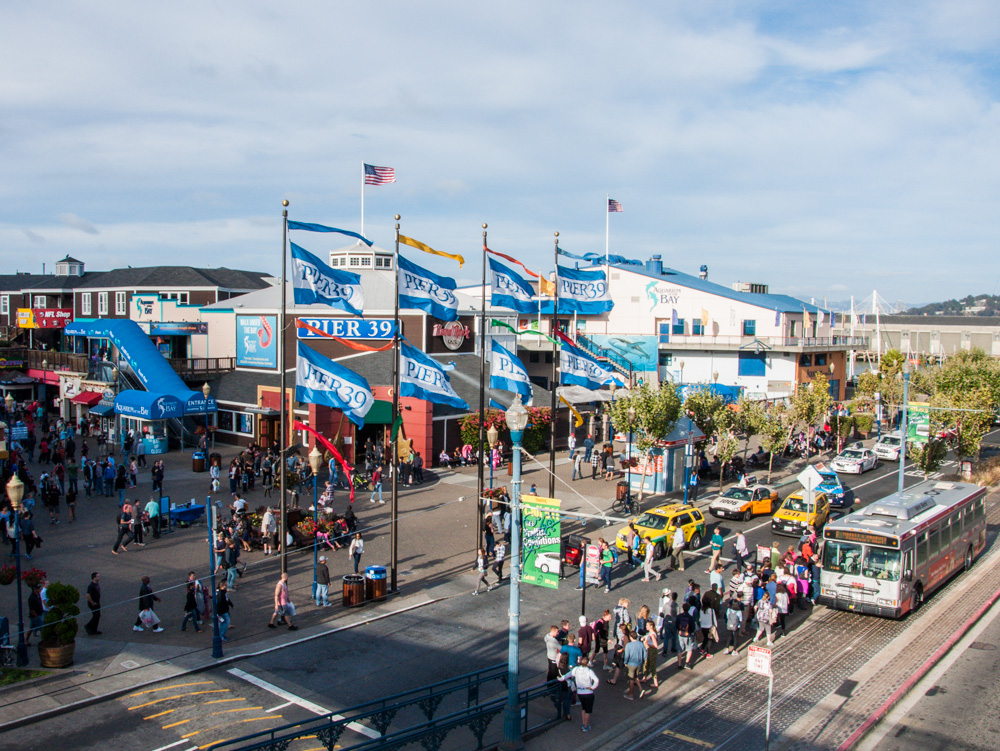 San Francisco’s Pier 39 on the Embarcadero

Down the promenade from the restaurants of Fisherman’s Wharf is Pier 39, which has somehow become the type of destination that someone halfway around the world wants to come here to see. So you meander through the shops, pick up some overpriced souvenirs to bring back to your coworkers, eat some generic and also overpriced food, and depart, with nothing to show for your troubles aside from some cheap magnets or shot glasses, and a t-shirt that reads “Alcatraz Swim Team.” 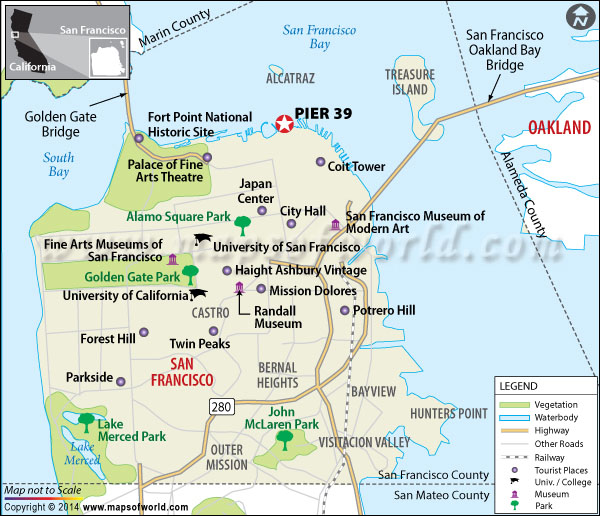 I’ve been to Pier 39 so many times, bringing out-of-towners, and never considering why, but knowing that it’s on every list of must-see attractions in San Francisco. It’s huge and smells of popcorn, fudge, fried seafood and sometimes the fishy stink of the ocean on a hot day. Its carnival-like atmosphere appeals to children, though the only ride is an admittedly cool carousel that plays music from Disney movies and features murals of San Francisco sites. There are, however, plenty of other things to do at Pier 39. 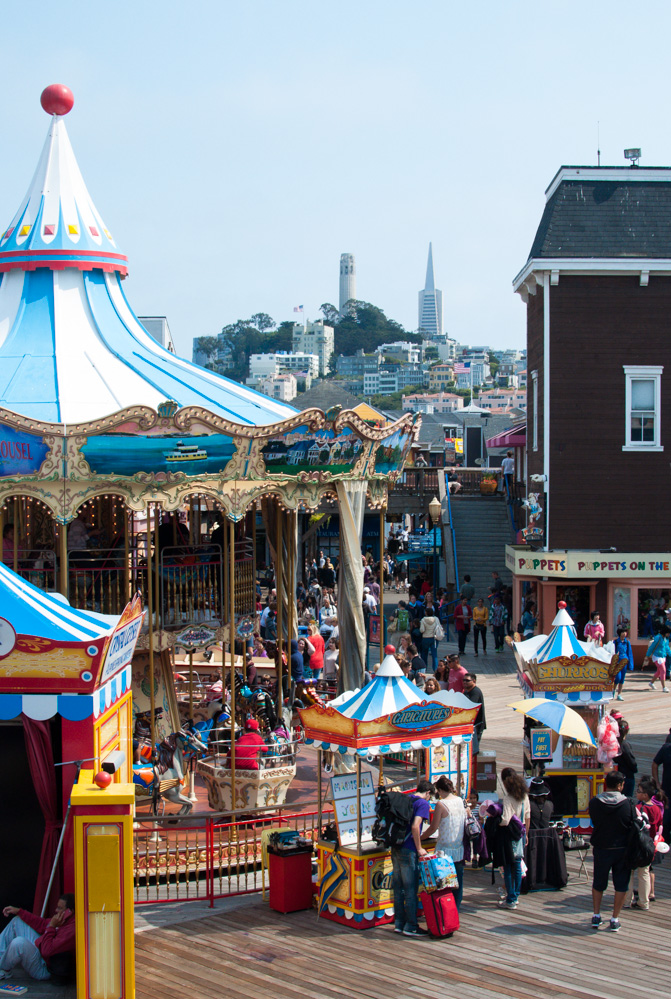 The carousel at Pier 39

A stage at the end of Pier 39 hosts shows throughout the day, including magic shows, juggling acts, acrobats and comedians. Narcissists love making their way through the 2,000 square foot labyrinth entirely lined with mirrors at Magowan’s Infinite Mirror Maze. Lit with black lights and painted in bright, psychedelic colors, the maze is disorienting. Laugh as your friends run into mirrors, and play hide and seek, all while admiring your own reflection.

There are also more practical activities, like practicing your survival skills and preparing for the zombie apocalypse, alien invasions, or defending against our future robot cowboy overlords at the 7D Experience, a 3D movie, laser shooting game, and roller coaster all rolled into one attraction. They also have a room to work out your bank robbery scheme, using acrobatic feats to make it through the web of lasers, ostensibly to reach the vault.

As for food, there is no shortage of options, including chain restaurants, like Bubba Gump (Forrest Gump!) and the Hard Rock Cafe, some originals like Crabcakes and Sweets, a tiny spot with good fried seafood and funnel cakes, and Trish’s Mini Donuts. Boudin Bakery Cafe has a location on Pier 39 that sells sourdough bread, sandwiches, and of course, clam chowder. Neptune’s Waterfront Grill is on the second floor at the far end of Pier 39, offering nice views of the bay and classic steak and seafood dishes. Fog Harbor Fish House serves fresh and sustainable seafood with daily specials, while Forbes Island, which claims to be the only man-made floating island in the world, offers fine dining and great views right out on the water. There’s Beer 39 and a wine bar for the adults and the Biscoff Coffee Corner for cookies and coffee.

In addition to the many San Francisco-themed souvenir shops, there is an overwhelming variety of other stores, from boutiques to a surprising number of stores dedicated to one specific item. There are two magnet shops, a hot sauce store, a keychain store, and We Be Knives, a knife store where you can buy a pocket knife to enjoy for the duration of your trip to San Francisco until it gets confiscated because you inevitably packed it in your carry-on. The theme of punny-named spots continues with the San Francisco Sock Market, which sells only socks, and the less cleverly (kleverly?) named hat store, Krazy Kaps (which may or may not be owned by the Kardashians) (it’s not). Then there are amusing novelty shops like the Left Hand Store that caters to the oppressed 10% of the population who have suffered through this right-handed world – until now. (But seriously, I have a hard time accepting that butter knives and spoons are not ambidextrous already.) There are jewelry shops, including the Pearl Factory, where you choose your oyster and keep the pearl inside for about $15, until the sales people talk you into buying a $500 setting. 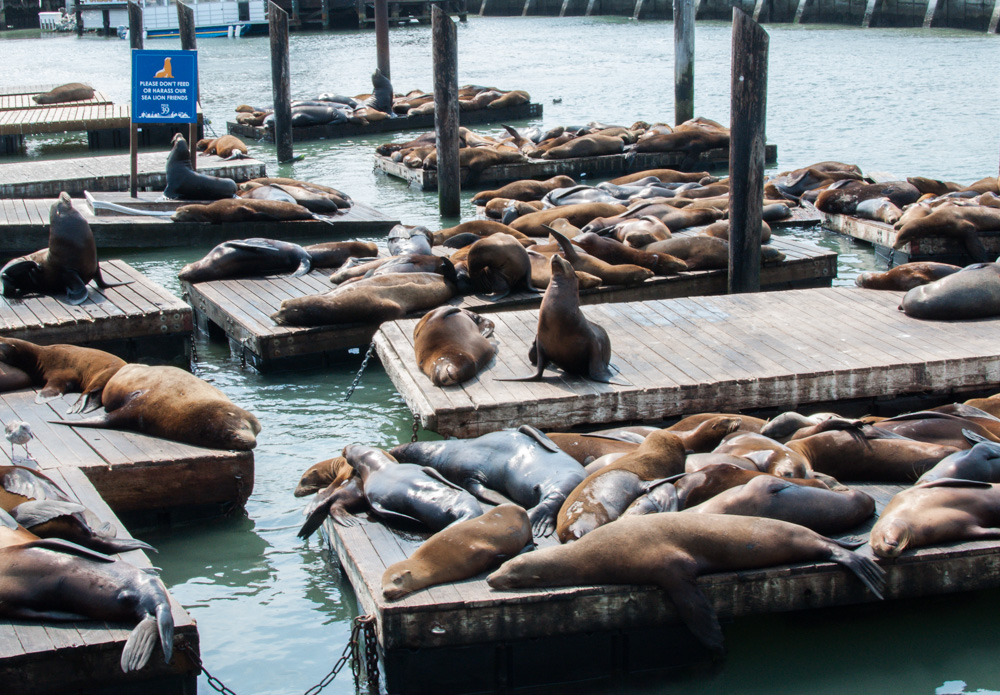 The best part of Pier 39

The real redeeming feature of Pier 39 is located behind the pier – away from all the shops, out on the docks. California Sea Lions began congregating on the docks alongside Pier 39 around the time of the 1989 Loma Prieta earthquake, migrating from Seal Rock on the western coast of San Francisco (next to the Cliff House) to the calmer, protected waters of the bay. The numbers fluctuate throughout the year, from very few when the sea lions leave for warmer weather or mating season, to hundreds when they return. It’s entertaining to watch their interactions – though most sunbathe and nap alongside one another in a huge dog pile, a few bark boisterously and stretch their heads impossibly far back while basking in the sunshine. As they vie for the best spots on the dock, sometimes one of the sea lions gets pushed off the dock, rudely awoken from its nap as it splashes into the water. Other times, a swimming sea lion leaps out from the water, landing right on top of the others, drenching them in cold water. They’re funny and playful, and they remind me a lot of dogs. It’s fascinating to watch their social dynamics, and they capture the attention of children and adults. Up the stairs from the sea lions, the new Sea Lion Center offers talks and displays about the sea lions, including a sea lion skeleton and the pelts of a few sea lions, so you can find out what they feel like (I had always wondered!). The exhibits demonstrate some of the negative effects of plastics and littering on the ocean habitat. It’s a great educational center and definitely worth checking out (plus, it’s free). It’s run by the Aquarium of the Bay, which is also located at Pier 39.

Pier 39 itself is free, but there are endless opportunities to spend money. The official parking garage for Pier 39 is located right across the street, with a pedestrian bridge straight onto Pier 39. It is very expensive ($9/hour and you pay for a full hour even if you’re 5 minutes into the next hour), but they do offer an hour or two free with validation from one of the full-service restaurants on Pier 39. There are 14 to choose from and they do not include restaurants on Fisherman’s Wharf or off Pier 39.