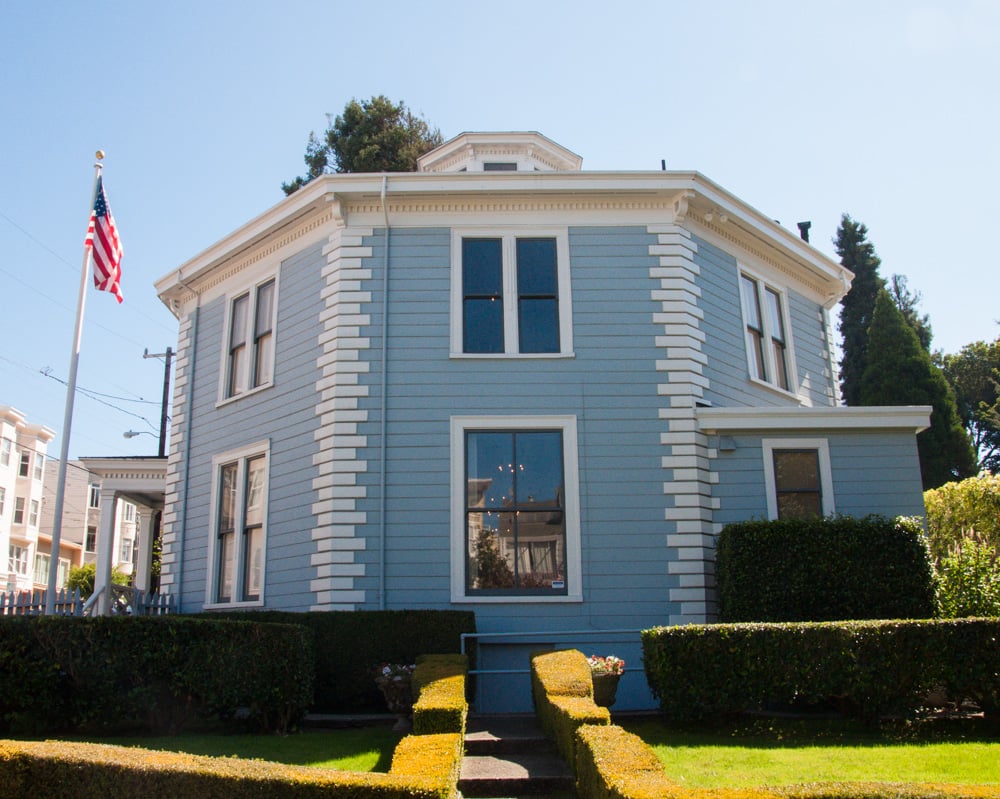 The Octagon House from its garden 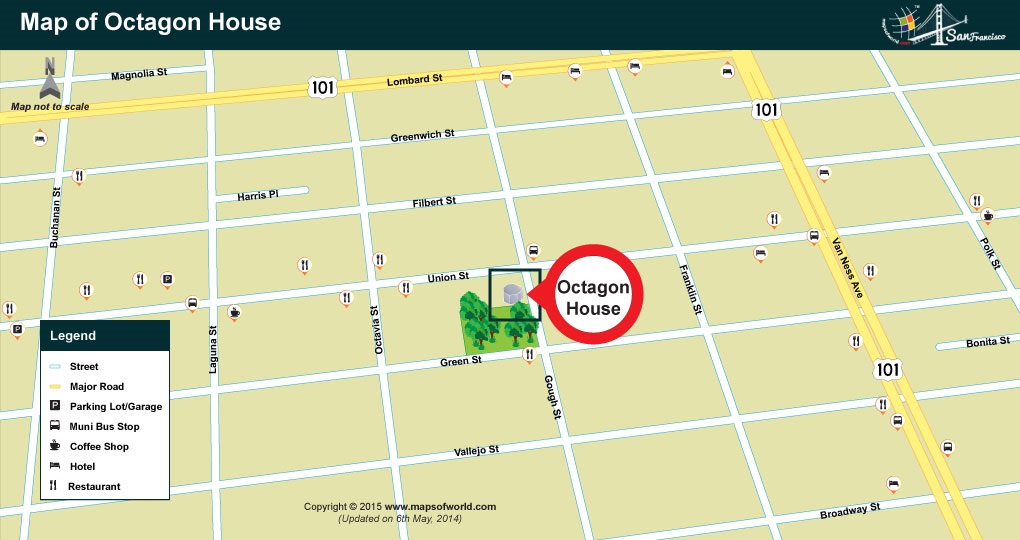 I heard about the open house on KGO (news radio) one Saturday morning, during a brief spot for listeners to call in. A woman came on and quickly mentioned the unusual Octagon house and said they had historic artifacts on display, including the signatures of all but two of the signers of the Declaration of Independence.

The Octagon house (San Francisco) is owned and operated by the National Society of The Colonial Dames of America in California. A table was set up in the entryway with books, pamphlets, and a donation box (entrance is free but there is a suggested donation of $4).

When we arrived, we were greeted by Julia, who it turns out, was the woman who spoke on KGO that morning.  The women were so excited that we’d heard the impromptu radio spot and driven over to check it out. They were sweet and friendly in that formal and proper way that women who call themselves “dames” should be.

We weren’t expecting a personal guided tour of the Octagon house, but that’s what we got. Julia explained that the house’s unusual shape was designed to allow for better light and heating, more space and the best harmony. A trend, beginning in the 1850s, the octagon houses allowed for about 20% more space than a square of similar size, with lower construction costs, making it optimally efficient. The ideal structure would be a circle, but because circular buildings are difficult to build and awkward to furnish, the octagon was the next best shape. The Octagon house is topped with a cupola with windows that open all the way around, serving as a skylight and great ventilation. 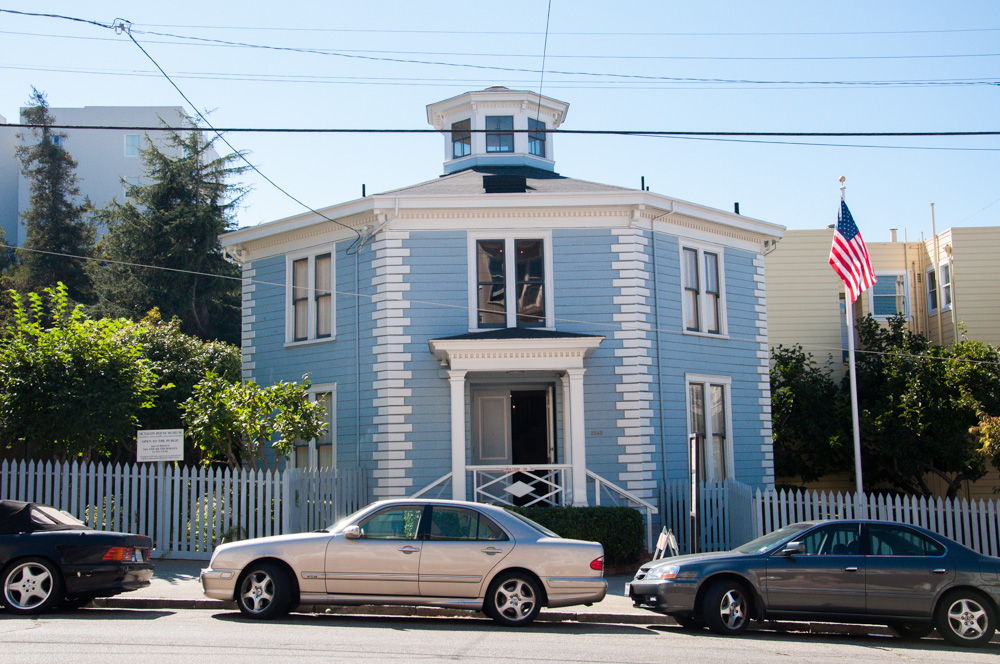 The cupola of the Octagon House as viewed from the street

Julia told us that the Octagon house had been built by the McElroy family in 1861, and had been one of very few octagonal houses in San Francisco. Only two remain, and the other is a private residence occupied by a family.

Though not much was known at the time, the octagon house was left to PG&E, which then sold it to the Dames for $1 in 1951. The Octagon house has been relocated and renovated after it sustained damage from the 1906 fire and general disrepair. The Dames had plumbing and electricity added and made some other changes inside, like moving the staircase from the center to the back wall. The original architecture would have been fascinating to see, but we were shown the blueprints instead. The layout is so different from anything we see today, with some awkward spaces and angles.

During construction of Octagon House, a metal time capsule was found under the stairs, containing a tintype image of the family, newspaper clippings, and a letter which I bought a copy of for 50 cents. It starts out hilariously, asserting that Mr. McElroy and his wife are “a very good looking old couple” (at 42 and 40!) and excusing his nephew, an artist, by explaining “we are in hopes that he will be in a more respectable business by the time that this paper is discovered.” As it continues, the letter provides a fascinating (though bigoted) depiction, capturing the zeitgeist of the 1860s in San Francisco, from the impending civil war to the city’s quick growth and diversification after the Gold Rush.

Have people stopped leaving time capsules? Has the internet, with all its archives, made the time capsule obsolete? What a fun idea, to leave a small glimpse of your life behind for someone in the future to find and to understand. They would learn so much even from the information you choose include and omit, like Mr. McElroy discussing property prices and property ownership, which would never occur to me to add.

After we learned a bit about the family, our docent Julia showed us around the room, pointing out the collection of antique furniture, china, and art. While none of the furniture is original to the Octagon house, it’s a good place to showcase the antiques collected by the Dames. The furniture is arranged in small seating areas by era and unbelievably, some of the furniture was from the Civil War era. There were Chippendale-style chairs and other more simplified designs. Julia took the time to explain their features before we provincial folk ever had the chance to show our confusion. One highlight of the antiques was a china bowl that had been lost in a shipwreck and recovered 200 years later, still in perfect condition.

Julia directed us upstairs, where other docents were waiting to show us around the rooms. We entered the signature room first, where we saw the signatures 54 of the 56 signers of the Declaration of Independence. The notes that have been collected by this society feature incredible handwriting and the signatures of John Hancock, John Adams, Samuel Adams, Ben Franklin, and so many more of our country’s founders. Amazing, especially unbelievable that they are over 200 years old and written on paper.

Another room upstairs is dedicated to a library with genealogy records, as well as books about the colonies and some of the early communities in America, such as the pilgrims and puritans. Artifacts are displayed throughout, like antique playing cards and eyeglasses and oil lamps. We were shown a type of Murphy bed, used to free up space during the day, as the rooms served many purposes. Beneath the mattress was a rope, intricately wrapped around nobs along the edges, which provided the support for the mattress. The docent explained that each night before bed, they would pull the rope tight, and through the night it would slowly stretch and the mattress would sag, and that this may have been the origin of the phrase “Sleep tight!” Let’s not think about the bedbugs part.

Open: Open to the public on Second Sunday, second and fourth Thursday every month (except January and holidays) from 12 pm to 3 pm