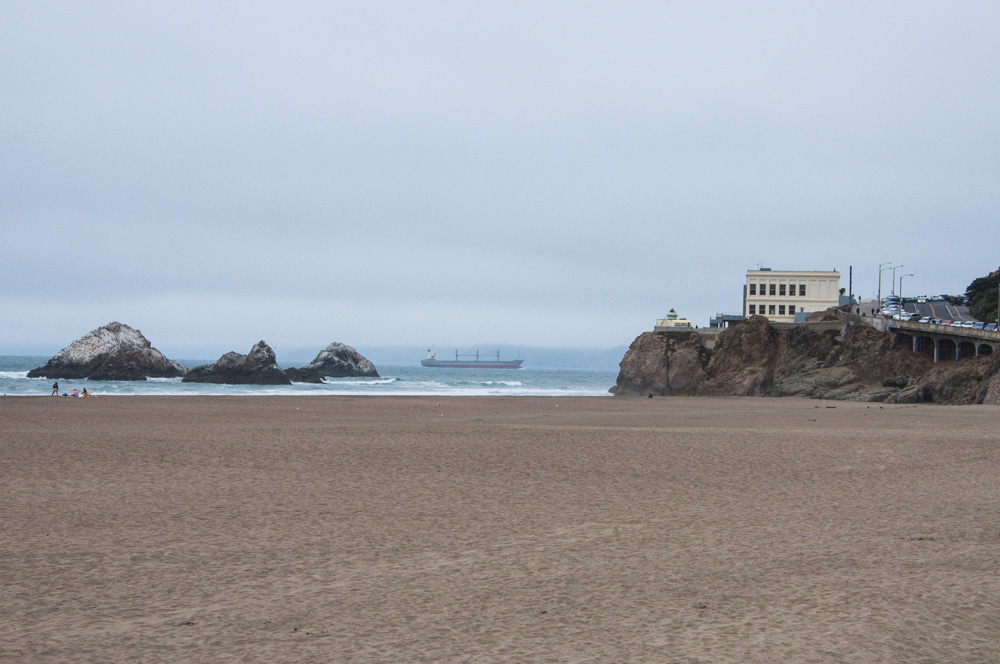 Ocean Beach – On the western edge of San Francisco

Ocean Beach, San francisco –  On the western edge of San Francisco, 3.5 miles (5.6 kilometers) of undisturbed beachfront stretches down the coast, from Lands End and the Cliff House, past Golden Gate Park, and all the way down to Fort Funston. Right alongside the beach, the Great Highway is the two-lane road that extends from State Route 35 (known as Skyline Boulevard) before turning into Point Lobos Avenue as it curves past the Cliff House. Though there are few intersections on the expressway, there are frequent traffic lights stopping traffic for crosswalks across the Great Highway. The lights default to red, even when no pedestrian is there to cross, but locals know that driving exactly 35 miles per hour will let you drive right through, each light switching to green just before you arrive. 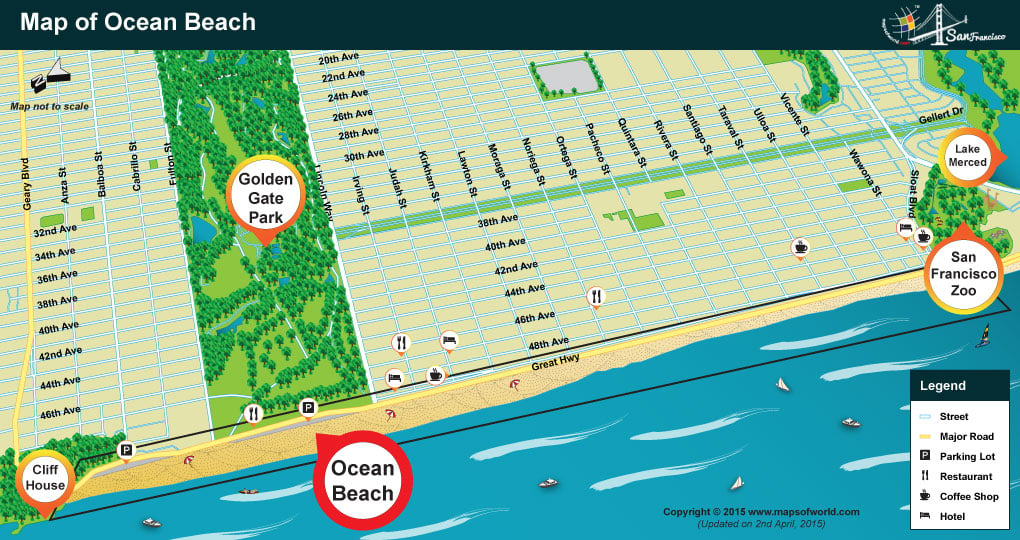 Driving up the coast, I left behind the bright, warm summer day in the rest of the Bay Area and entered gloomy winter, the sunshine replaced by strong gusts of wind and dense, low fog that sprinkled my windshield. The forecast called for the morning fog to burn off and temperature to rise to 70 degrees Fahrenheit, but it was already almost noon. Ocean Beach is usually several degrees cooler than even the rest of San Francisco.

Though it is still summer and tourists crowd the city’s main attractions, Ocean Beach remained, understandably, mostly deserted. That’s not surprising – San Francisco isn’t exactly known for its beaches and summer doesn’t typically offer the city’s best weather. Despite its soft sands and wide shoreline, Ocean Beach isn’t what many people think of when they imagine a California beach, and San Francisco doesn’t have the vibes of a beach town. Some visitors might not even realize, as they’re rushing around the city sightseeing, that this expansive beach is so close. The bayside coast of San Francisco is mostly built up with piers along the Embarcadero, while this coast is quite undeveloped in comparison.

The miles of oceanfront are largely unchanged – no buildings, no showers, no pier, limited restrooms, not even any shops. There’s just the sea wall, the sand, and the ocean. A row of houses with great ocean views line the road on the opposite side of the Great Highway, except where Golden Gate Park abuts the highway between Fulton Street and Lincoln Way. The two windmills are visible on the edge of the park, near the Beach Chalet Brewery and Restaurant. A few cafes and some surf shops are located not far from the beach, but there are none on it. Along the southern end of Ocean Beach is the San Francisco Zoo. 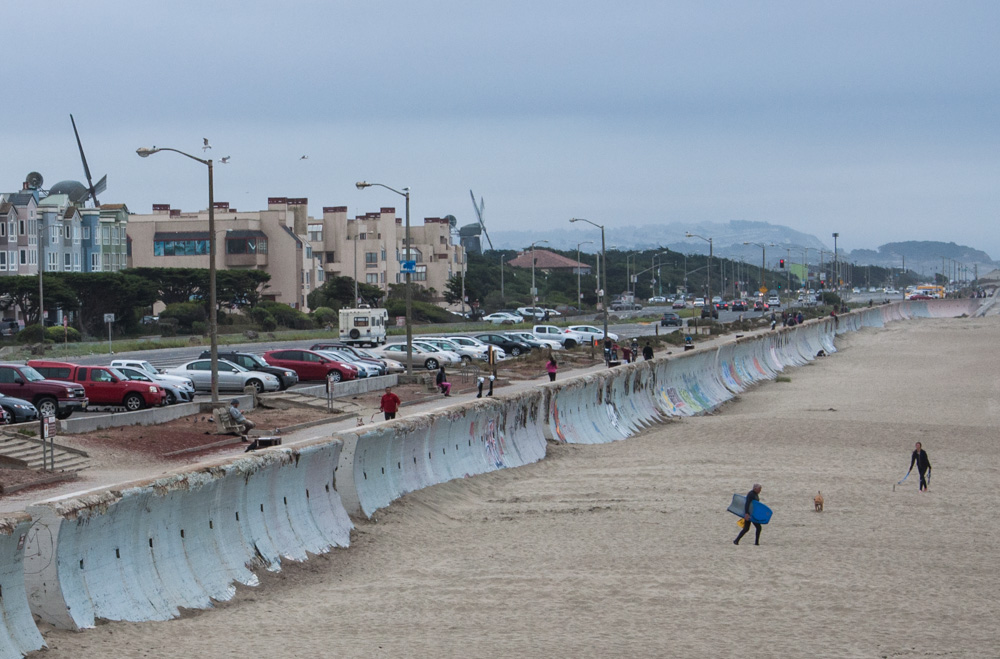 At around lunch time on a weekday, people were parked facing the ocean, eating their lunches in the warmth of their cars. It wasn’t as cold as it looked, but most people relaxing on the sand were bundled in sweatshirts, sipping coffee. Very few ventured out into the frigid water, aside from the handful of surfers donning full wetsuits, out at the north end of the beach. The waves aren’t huge, but they are decent, and signs along the sea wall warn of the dangers of the ocean’s strong currents here. The water is not clear, but it’s typical for a Northern California beach, and not very polluted. The sand is soft and yellow and fairly clean, though sometimes dog walkers don’t pick up after their pet or irresponsible visitors leave trash. Ocean Beach is also a good place to find intact sand dollars and sea shells. 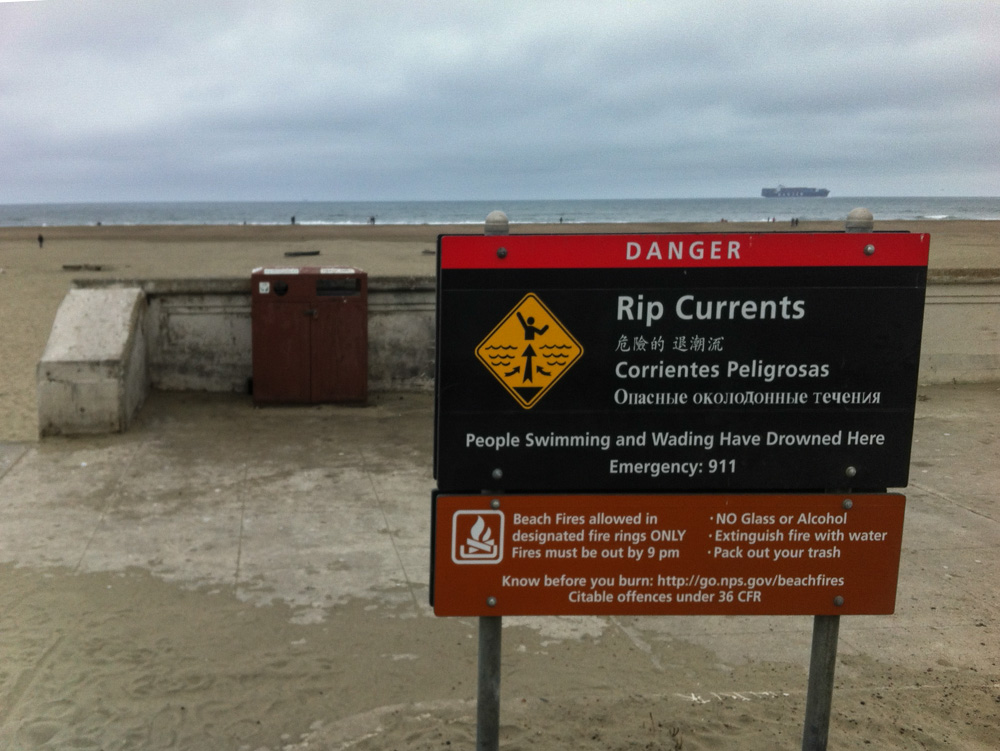 Other visitors to Ocean Beach that day included moms with strollers, joggers and cyclists, who utilized the long, uninterrupted path, and dog walkers, who brought huge packs of dogs for their lunchtime walk. A couple of guys tossed around a football and a few families flew kites, which flew wildly in the wind. Just to the south of the beach are some cliffs that are a popular (and terrifying) spot to go hang gliding, and they can often be watched from the beach.

My favorite part of Ocean Beach is the fire rings, where beachgoers can have barbecues and bonfires when the sun goes down. (Please note that there are strict guidelines for beach fires, including restrictions on what can be burned, fires must be extinguished by 9 pm, and no fires are allowed on Spare the Air days.)

Ocean Beach is a great place for bonfires, jogging, and biking, and on those incredible days when temperatures rise and the sun shines, it seems like the whole city comes out to enjoy the weather. I wondered why people came here on a day like today, misty and grey and cold.

A woman stopped me to chat as I walked along the sidewalk at the edge of the sand. She was standing, trying to avoid touching the bird poop-spattered sea wall, watching the waves. She’d felt called to visit the beach today, she told me, and when you feel that pull, you’d better listen. Her lungs needed to breathe in the ocean air; there was a lot on her mind. She felt better already. She explained that she believes in the ocean’s healing powers, that the salty water and air would cleanse you, mind, body, and soul. She’d had surgery on her ankle, and during her recovery, she would come to Ocean Beach and wade in the Pacific, soaking her feet in the salt water. When she returned to her doctor for a follow-up, he was surprised at how quickly she had healed, and she insisted that it was attributable to the effects of the ocean water. Before I left she reminded me to take a moment to let the ocean breeze fill me with peace, and I did.

The fog never burned off that day. When I left the area in the early evening, it was getting dark, or so I thought. I drove back down the peninsula and was surprised to find that it was still a bright sunny day outside of San Francisco.