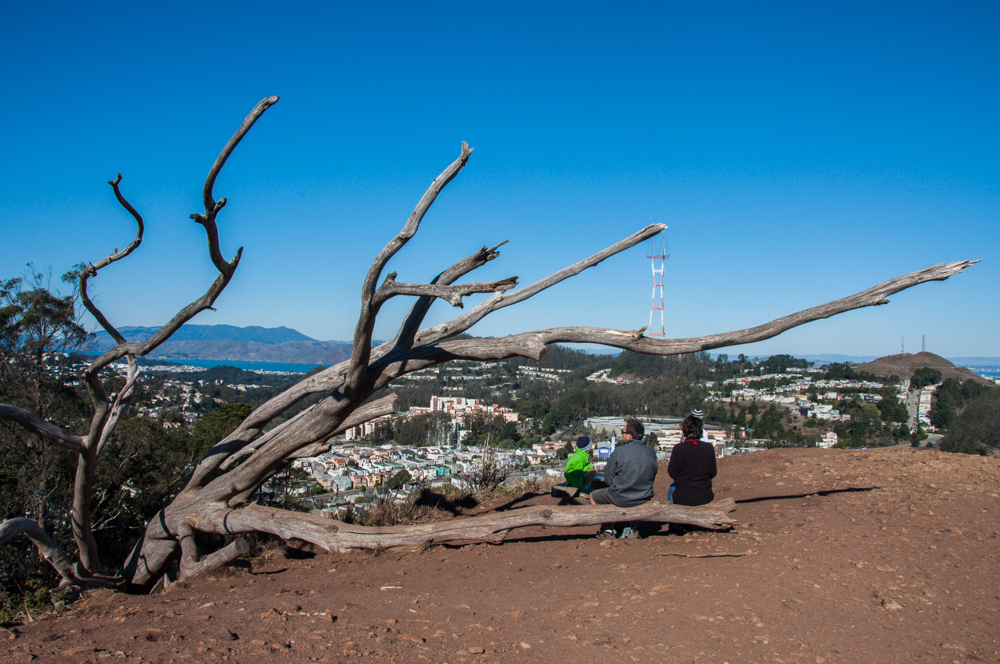 The views from Mount Davidson

When it comes to hikes within the San Francisco city limits, Mount Davidson has a lot to offer. It’s the highest natural point in San Francisco, though the path to the top isn’t much of a trek, and it features great scenery and vistas. The hilltop park is perhaps best known for the massive white cross at the top.

The park feels far removed from the busy city (well, that’s also because it is far away) but it’s still within the city limits and you can view the skyscrapers of downtown like a grove a trees in the distance. Mount Davidson is farther south than Twin Peaks (and away from just about everything in San Francisco), it’s really easy to get there. Though the roads are super steep, driving out to Mount Davidson is a breeze. The roads aren’t crowded and although there’s no parking lot, there’s plenty of street parking in the neighborhoods below the park. It’s even easier by bus: the 36-Teresita MUNI bus has stops right at the entrance to the park.

Though the hike up to the top is short, give yourself at least an hour to explore the park and soak in the views. It’s a different vantage point from other vista points like Twin Peaks, which you can see from Mount Davidson along with the Sutro Tower – and there’s no view of the Golden Gate.

At the top, the smooth, wiry branches of a barren tree stretch out over the city, framing the Sutro Tower and the skyline. The famous tree is the most popular photo spot on Mount Davidson, with many visitors climbing its branches to sit or stand over San Francisco.

The tree is harder to climb than it looks, however. While waiting to take my own photos of the tree, I watched a few groups before me struggle to spring themselves up onto the branch, or head down to the base of the tree and travel down the branch to the ends. Some of them gave up and just sat on the low branch to get their own iconic photo, but it’s much less impressive down there.

Though there are some great views of the San Francisco skyline, Twin Peaks, and all the way across the Bay, Mount Davidson is at its best when it’s shrouded in fog. The trees disappear into the mist, providing a moody, even spooky backdrop for photography. The day I visited, however, it was clear as could be with views across the Bay. There were many photographers out, some shooting nature while walking their dogs, others taking family photos or having a photoshoot with friends. Mount Davidson is one of the best spots in San Francisco for photographers.

Exploring the other Trails 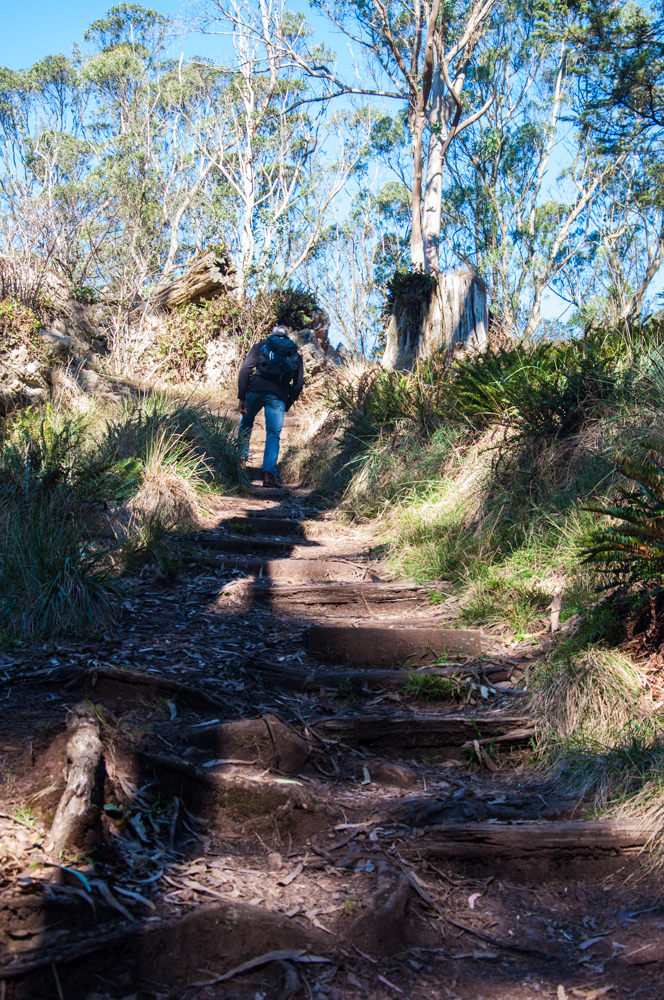 Though some visitors may end their Mount Davidson experience there after admiring the views, there’s much more to see. Unlike many other hiking spots in San Francisco, Mount Davidson allows its visitors to immerse themselves in nature and explore the trails, rather than simply driving straight up to the top (like Twin Peaks). There are direct routes to the top, but there are also some hiking trails to explore throughout the park that allow for deeper exploration, including some steeper paths. 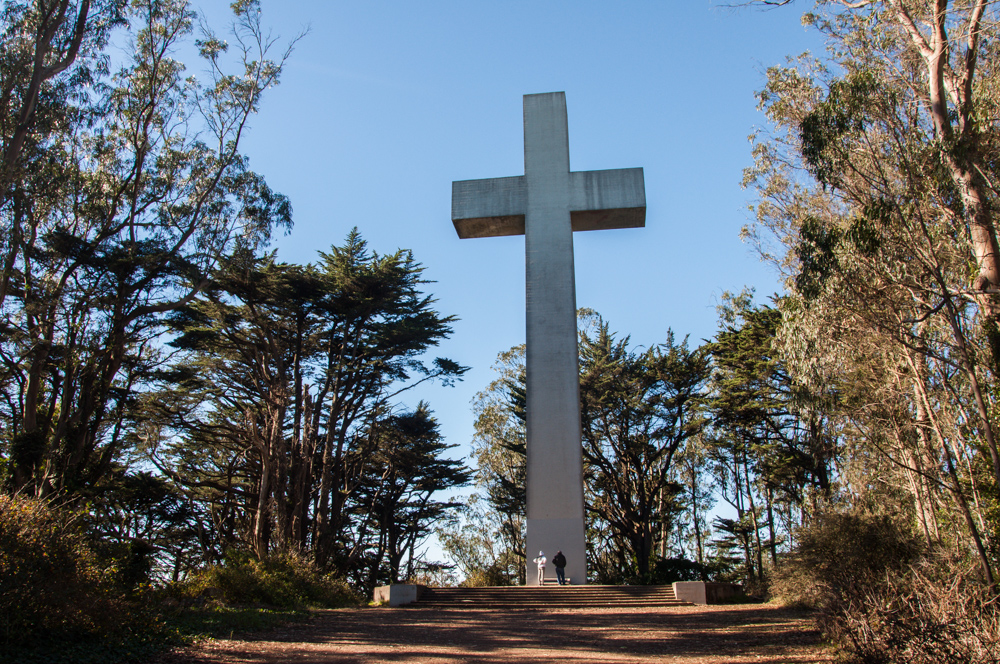 In addition to those breathtaking views, a walk into the woods reveals the hidden gem of Mount Davidson: a massive, 103 foot tall concrete cross. Enormous though the towering cross is among the tall trees that encircle it, it’s not visible from anywhere else on the hilltop or below. If you didn’t know it was there, you could stumble upon it or miss it entirely. Movie buffs might recognize the cross from the scene in the movie Dirty Harry, though the shots are dark the scenery is distinct.

A cross has topped Mount Davidson since 1923, for a church service by the city’s Grace Cathedral. Various iterations of the cross have stood in its place, but after fires destroyed a few versions, a concrete and steel version was built and lit by FDR in 1934. The cross and the clearing in front of it have held sunrise services every Easter morning since then. More recently, the cross has been maintained by the Council of Armenian American Organization of Northern California as a memorial to the victims of the Armenian genocide of 1915. Because of this, Mount Davidson has become a sort of pilgrimage for Armenian Americans to visit and pay their respects to those victims.

What I liked best about Mount Davidson was that it felt like a neighborhood in a small town. The park is surrounded by residential streets and everyone we passed as we explored the park were friendly and welcoming, most stopping to chat for a moment or to allow me to pet their dogs. The park atop Mount Davidson felt like it belonged to the community in a way that most places I’ve been to in San Francisco have not. Though a steady stream of visitors arrived at its summit, Mount Davidson was anything but crowded like Twin Peaks almost always seems to be. It’s not as popular as other vista points around San Francisco for a number of reasons, but I prefer it to all of them.