At Magowan’s Infinite Mirror Maze, visitors work their way through a kaleidoscope of black light and bright colors and get lost in the twists, turns and dead ends of the maze. Magowan’s is an old-fashioned fun-house-style attraction that offers entertainment that is family friendly and fun for all ages. The mirror maze is located in the touristy Pier 39, just up the piano playing stairs midway down the pier, next to the carousel. It’s not a major attraction, just something fun to do with your friends (or kids) while you’re already at Pier 39.

At only $5 (or two for $5 if you pick up one of the coupons frequently featured on group deal sites), the mirror maze is a cheap and fun activity for adults and children alike. Get a handstamp before you leave, and you can come back and try again for free later the same day. You can go back through as many times as you want or start at the exit and find your way back through to the start until you get tired of it. And you will get tired of it, as fun as it was.

I came with some friends after some happy hour drinks, which likely added to the fun we had making our way through the labyrinth. We checked in at the front desk, where the guy was missing or on break for a while. A common complaint in other reviews is that the maze closes unexpectedly for lunch breaks, but fortunately for us, he returned quickly. He hardly said a word to us, but we didn’t care because that was the extent of our interaction. We put on the disposable plastic gloves they require so that when we inevitably slammed into a wall, we wouldn’t leave fingerprints, and headed into the maze. In every direction, there were long arched corridors illuminated with trippy color-changing lights. Good tunes were pumping through the speakers, giving the maze some party vibes on a Saturday night. I think it could be really fun to rent out the maze and host a party there (although the crowds might make the maze less fun), and they do offer birthday party deals and group events where you can choose the soundtrack. 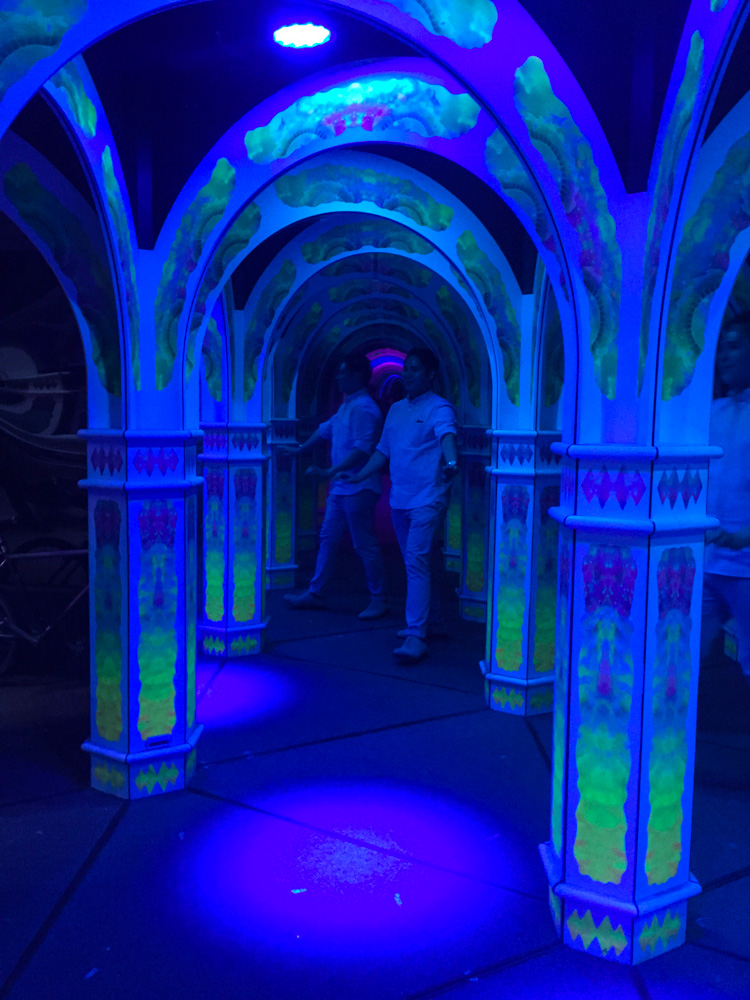 The infinite corridors of the mirror maze

Most of the hallways ended in dead-ends, where two mirrored walls came to a point. I was skeptical at first that the maze would pose any sort of challenge, but was pleasantly surprised to find that this maze truly can get you lost, at least for a moment. There was at least one moment of (minor) anxiety for me when I found myself separated from my friends and feeling stuck, but it’s not so huge or difficult that I actually panicked.

There was hardly anyone else in there, so we had the whole maze as our playground. It’s not huge (at least not as big as it looks, and certainly not infinite) at about 2000 square feet, so if you really tried to get through it quick, you could easily spend under 10 minutes in there. However, most of the fun is in the wandering around, exploring, taking pictures, and playing games, like hide and seek. And messing with friends or just racing against them (but you’re not supposed to run). My favorite part was calling a friend to come over to where I was standing and watching her try to figure out which version of me was the real one. It’s too fun watching people run into the mirrors. It’s like our brains can’t process all the different reflections and we don’t realize we’re about to walk right into ourselves. 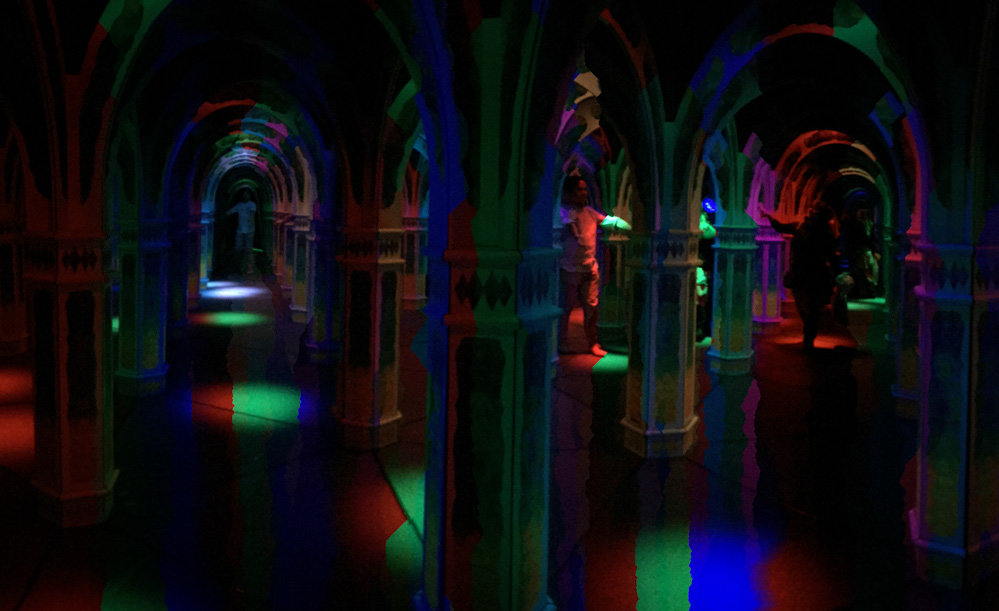 Finding our way through the maze

I think the illusion might be lessened if it were crowded, so I’d advise coming back another time if it seems busy. While kids and teens could probably spend a good bit of time going through, forwards and backwards and over again, adults will probably have their fill in about 15 to 20 minutes. I was ready to go after one time through the maze.

The experience is disorienting and dizzying at times but definitely fun and worth a few bucks and your time if you’re headed to Pier 39. It’s better with more people, so bring your friends.