I’d never heard of the International Art Museum of America before I noticed the “Free Admission” sign from across Market street one Sunday. The museum looked completely dark inside, but the door was wide open. I was wandering around with a friend and without a plan, so we decided to check it out. 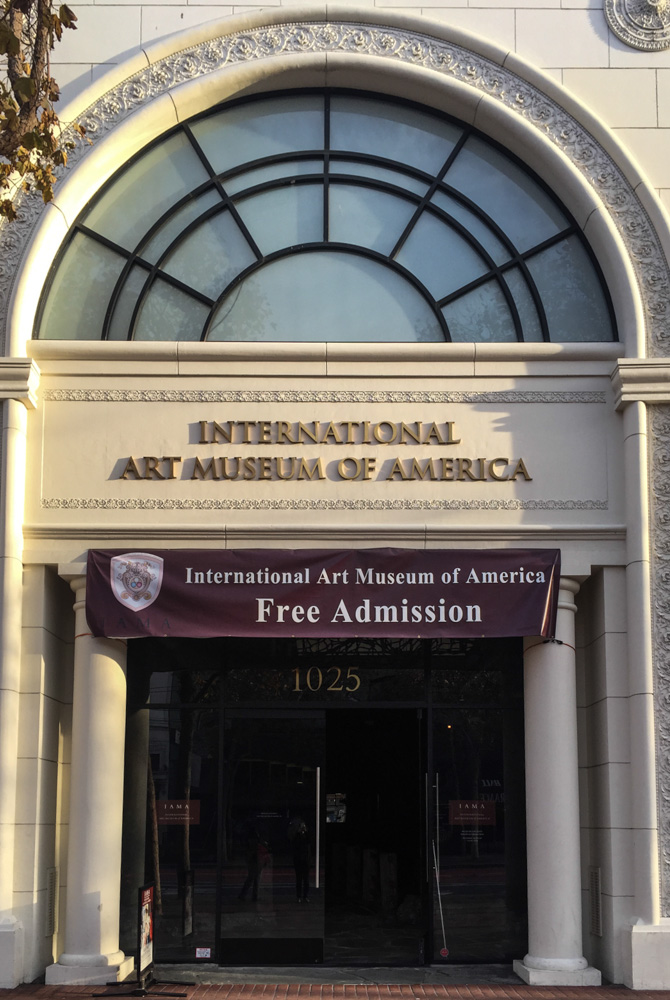 The International Art Museum of America: Come inside 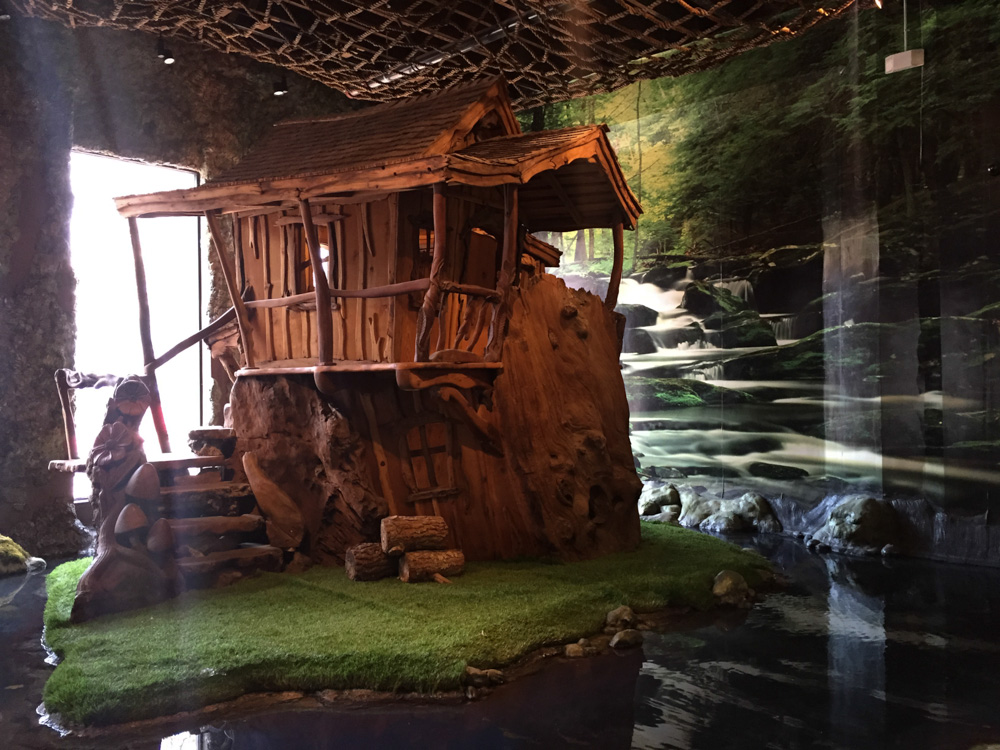 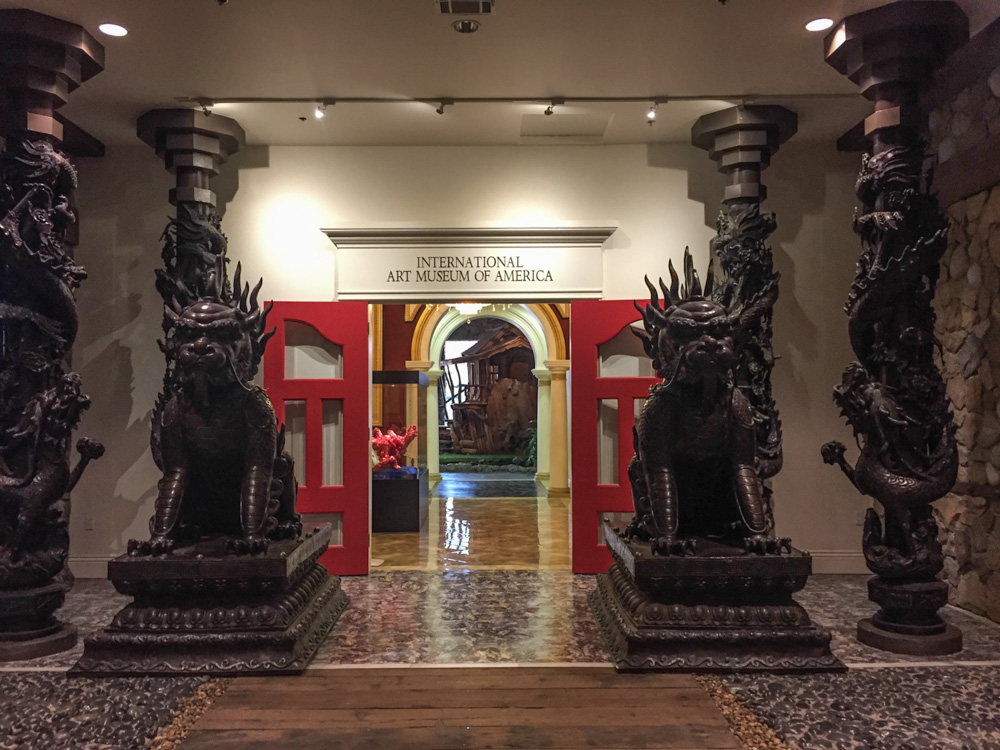 Asian carvings and doors, European style arches and columns, and a tree house

A woman at a reception desk looked at us strangely and asked “Are you here for the gallery?” She glanced at the men in suits who walked out from behind her on the right. Yes, what else might we be here for? She ushered us to the left, through an arched doorway, leaving us wondering where those men had come from. No photos upstairs, she told us. I have no photo evidence of the upstairs, but I offer this instead: 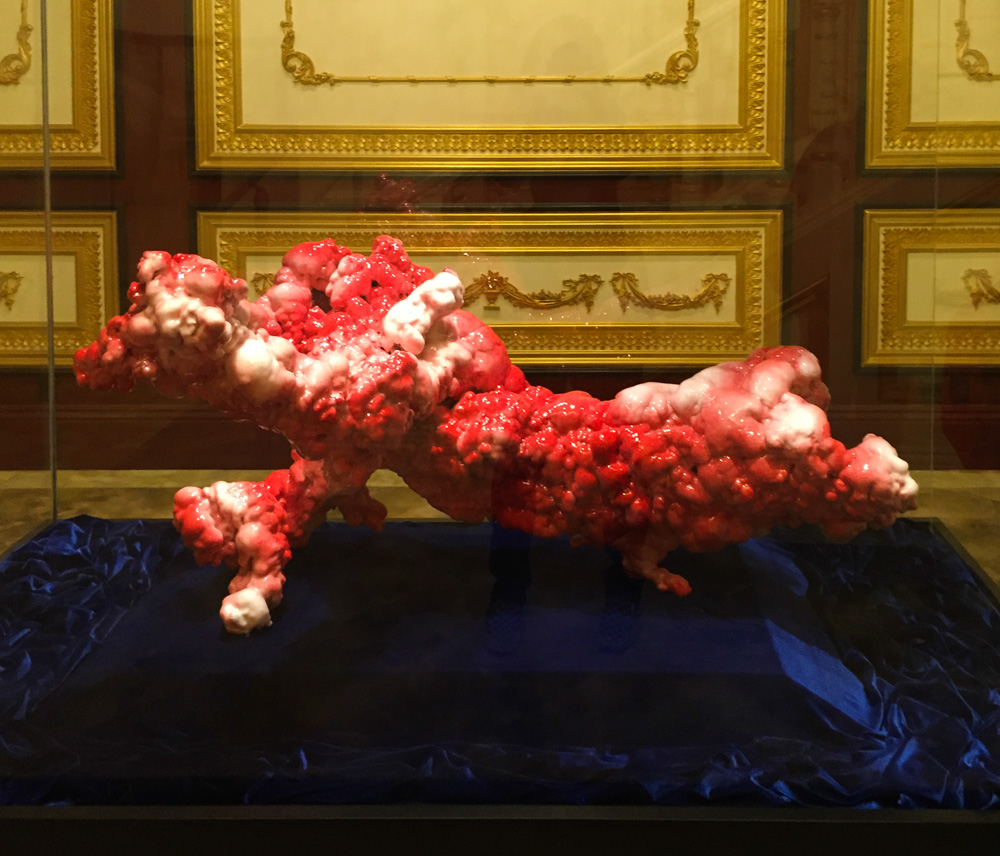 The first sculpture on display

We headed to the stairs, passing a glass-encased sculpture of something that initially looked to me like infected intestines. A plaque beside the sculpture explained that it was instead “beautiful coral.” Those vibes of internal organs, I soon discovered, would be a subtle, unspoken theme throughout the museum. So would the strangely worded placards praising each piece.

Upstairs, the first room seemed unfinished, with low, bare walls forming a room with windows, where I assume more art was meant to be hung. In front of this construction was a bust of H.H. Dorje Chang Buddha III, his long hair like a helmet over his bronze head. The sign on the statue explained that Buddha III was an artist, who was apparently very successful and accomplished and an art pioneer who had contributed the majority of the work in the museum. I couldn’t quite put my finger on why, but the message struck me as strange and disconcerting. Was this entire museum a façade for some religious sect? Just a way to get us inside to…what? Indoctrinate us somehow? Worse? The biography went on and on in its flowery high praise, and my attention span ran out, so I moved on to the art.

The gallery rooms and hallways held paintings and sculptures behind glass. Like downstairs, the gallery area was empty and eerily silent. Natural wood benches were placed in each room, but there was no one seated on any of them. There were no docents or security guards to be seen the entire time.

Some artists displayed were Western; several were Dutch, Belgian, and French, some were British, and at least one was American, mostly from centuries past. Much of the art was very nice. The rest were all from Asia, and mostly from one artist: H.H. Dorje Chang Buddha III. Surprise! While the descriptions for the European works all read like normal explanations of the pieces, those from this Buddha character were different. They were long-winded and grandiose, exalting the talents and mastery of the artist, insisting upon their beauty and the artist’s creation of this all new style. They were treasures from heaven. I enjoyed some of the art, but come on. It was like reading propaganda about Kim Jong-un. I initially excused their peculiar tone as an Eastern way of writing, something lost in translation, but I began to wonder if the artist himself wrote these aggrandizing descriptions. A vanity project?

What struck me as we saw more pieces from Buddha III was how wildly his styles varied. According to those signs, Buddha III cultivated 16 new styles of painting. Aside from those coral sculptures, there were many paintings, some actually quite beautiful. Some mimicked natural materials, like colorful rock and jade, and others depicted lions or pandas. Some works were like dreary puff-paint versions of Van Gogh’s sunflowers and Monet’s water lilies. Then there were some traditional-looking works of calligraphy, and among those, some ink wash paintings on long scrolls that reminded me of watercolors, which were my favorites. And then, of course, there were the sculptures.

In one room, there was a set of wooden doors with a sign above that read “Treasure Room.” The door was sealed with three locks and a red velvet rope blocked the doorway. Strips of yellow tissue paper with someone’s name scrawled across them were taped in a stack to the door, vaguely resembling caution tape.

The description on the door indicated that the room contained the first ever accurate depiction of fog, how rare and amazing a feat it had been to create it. Then we noticed the peep hole far to one side of the door, and I thought maybe we could view the sculpture by looking through it, but no. The peep hole faced the opposite direction, so those inside the locked room could look out at us. I suddenly felt like we were being watched. Was this the art or was there really a room back there? Were we part of some kind of conceptual or performance art piece?

As we journeyed deeper and deeper through the strange, art-lined labyrinth, we reached a point where I was sure that we should have completed the loop by now, and yet our surroundings were still unfamiliar, and those stairs – our one opportunity for escape – were nowhere to be found. Now there were no other visitors around – and then it occurred to me that the only other people we had seen inside this museum were two separate couples walking quickly in the opposite direction from us. They did not stop to look at the art, and the woman in both couples clutched the man next to her and made eye contact with me. Were they trying to tell me something? Were they fleeing from something? (Wait. Were there even two couples, or was that the same couple, trapped in this maze, trying to find their way out?)

We turned down a hallway sectioned off by a low, tile-roofed wall with windows to another hallway. The collection there was yet another by Buddha III. What I saw was discomforting, and even as I write this I wonder if the way I remember it was the way it actually was, but I have no photos to confirm. They were 3D hologram images framed by actual three-dimensional sculptures of what were presumably roots or a cave’s stalactites, but once again resembled gruesome internal organs of a human body. In my anxious state, I imagined that these were constructed from select museum visitors. Until then, I had assumed that this Buddha III guy had existed sometime in the distant past, but this holographic art meant that he must be a contemporary artist and probably the leader of this cult I might have just unintentionally joined.

I began to question my sanity as I read one of the descriptions of these strangely framed pieces, which referred to a phoenix, while the hologram depicted flamingos, making it all the more surreal. Was it just me, feeling confused and discomforted? It was then in that strange hallway that a man, his hair crazy and his eyes darting wildly around the room, walked past us from the direction we headed, talking and singing to himself. He didn’t seem to notice us. Panic set in. I turned to my friend and mouthed “This is how we die.”

We continued through the maze – the doorway where that man had come from was the final frontier and our last hope. What would we find? Would there be a room full of people, applauding us for completing the journey, before they locked us in and accepted us into their group, where we’d one day literally or figuratively drink the Kool-Aid and ride the meteor off to meet Xenu (Am I mixing my metaphors/cults)? I thought back to that locked Treasure Room. If this were the horror movie I was convinced we were starring in, we’d somehow become one of those treasures, locked away in that room with our names on yellow tissue paper, staring out through that peep hole.

But finally, relieved (and maybe a little disappointed), we turned the corner to find ourselves in familiar surroundings, the bust of Buddha III in front of us and the elusive stairs to freedom just beyond. 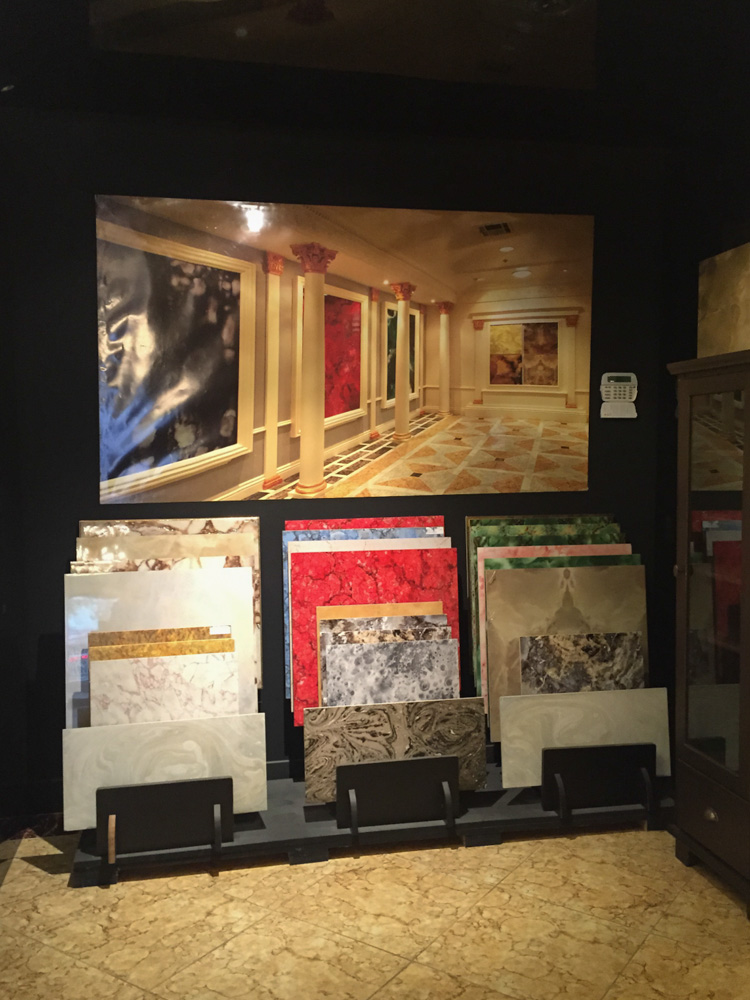 Safely downstairs, we exited through the gift shop, which was surprisingly quite normal (with some merchandise that I actually wanted to buy – was I brainwashed after all?) aside from the tile showroom in the back, which resembled the flooring section of my local hardware store. The tiles were inspired by Buddha III’s designs. We selected a ceramic tile from the stack and brought it to the very normal cashier to purchase for $1 (technically a donation), to keep as a reminder that this experience really happened (and to use it as a trivet). 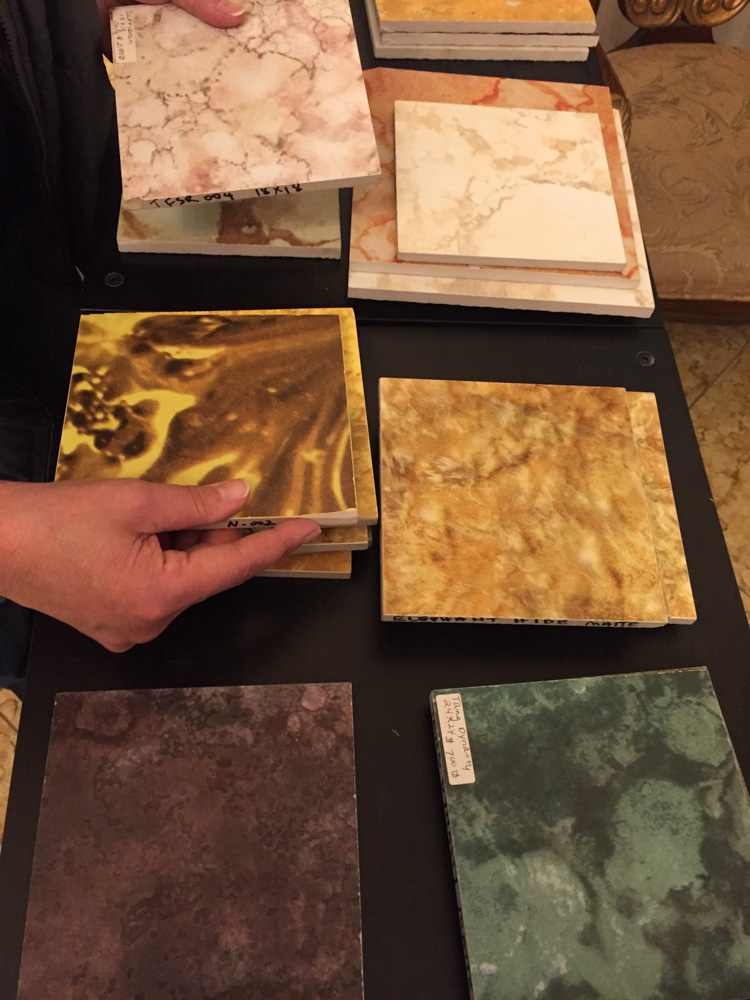 When I got home, I decided to look up the artist, H.H. Dorje Chang Buddha III. Aside from the unnerving and unnatural looking photographs of him, I found that he proclaims himself to be the third reincarnation of Buddha and was wanted in China for fraud. He’s now living as a very wealthy man (or god?) in Pasadena, California. That H.H. stands for “His Holiness,” by the way. He is the leader of a Buddhist sect. It’s unsurprising that a cult leader might be wanted for fraud, but the Chinese government doesn’t have a great record for dealing with religious groups or dissenting artists, when you consider political prisoners like Ai Wei Wei, so it’s tough to discern what’s really going on there.

Buddha III, however, claims to be capable of miracles, and has sold his art for inexplicably large amounts – one sold for over $16 million. This is offered as proof of his talent.

The IAMASF claims on its website not to be religiously affiliated or connected to the artist, but does explain that the museum was originally meant to showcase only the work of Buddha III. Apparently, the artist was so humble that he wanted to share the space with other artists. Then his work would be displayed alongside world-class artists. Humility, or a way of elevating himself to their level? Perhaps, if this place wants to be taken seriously, the museum should consider allowing the viewers to decide the value and merit of each work, rather than insisting upon them. Then again, those descriptions were one of the highlights of the museum, so never change, IAMASF.

The museum is a nonprofit that opened in 2011, and the Treasure Room is open for private viewings for the low low price of $600 or for a discounted price of $60 per person on two occasions each year . What treasures does it hold, and what’s with the peep hole? According to their website, the art contained inside has received bids of $70 million, and has been referred to as “gifts from God to mankind” by some unattributed US government official. Despite myself, I am intrigued. I found no accounts of the room’s contents online.

So is IAMA a vanity project by a Chinese millionaire? A front for a strange Buddhist sect? Maybe some kind of money laundering operation? Or is it just what it proclaims to be – an earnest, fledgling art museum with lofty aspirations and a lot of love for Dorje Chang Buddha III. The mystery lives on but one thing is for sure: the International Art Museum of America is a bizarre but fascinating place to spend an afternoon.