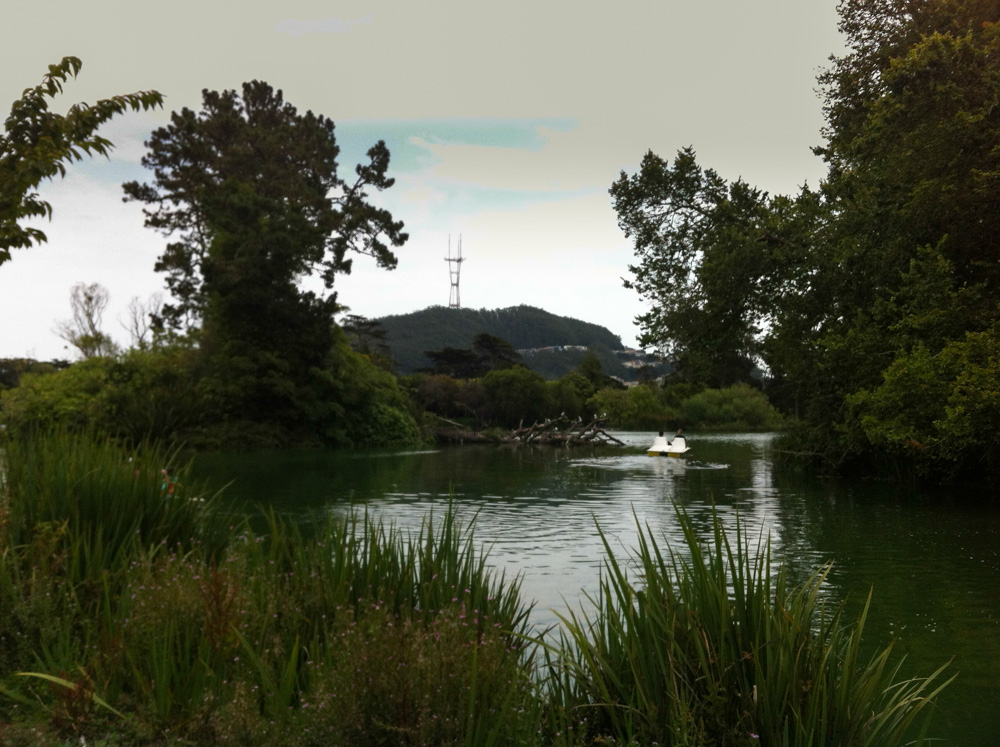 A paddle boat on Stow Lake in Golden Gate Park

Golden Gate Park  – In the midst of the city chaos – the traffic and the hustle of the metropolis – lies an oasis, a place to take a walk and a deep breath and reconnect with nature. The long, rectangular expanse of green space stretches east from the coast at Ocean Beach, narrowing into the panhandle past Stanyan Street. Golden Gate Park is bounded by Fulton Street and Lincoln Way to the north and south, with the Great Highway along its western edge, separating the park from the beach. Highway 1 (CA State Route 1) passes right through the middle of the park. A free shuttle connects the park’s many attractions, with service every weekend and on holidays.

At about 3 miles long by a half mile wide (or 4.8 kilometers by 0.8 kilometers), with an area of 1,017 acres, Golden Gate Park is huge – substantially larger than even New York City’s Central Park, which covers about 843 acres. You could explore the park for a week and still not find every gem tucked away into this park. 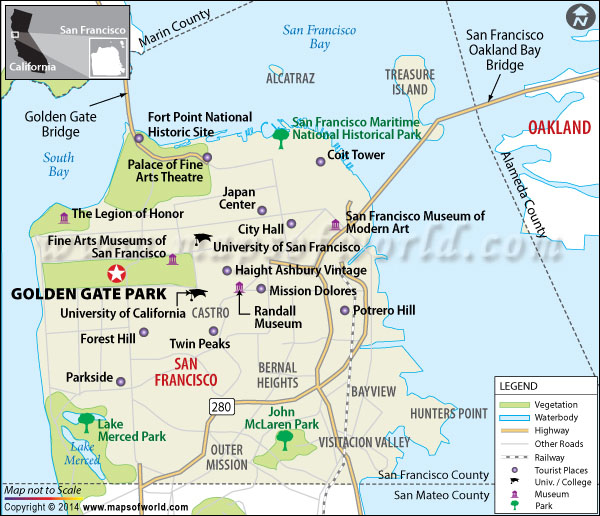 Looking at the park today, with its lush greenery (even in the middle of a major drought) and forests of eucalyptus, Monterey pine and Monterey cypress, it’s hard to believe that this space was once covered by barren sand dunes. The features of Golden Gate Park were designed, planned, and planted under the direction of William Hammond Hall, along with horticulturist John McLaren, beginning in the 1870s. The two transformed the space, which was then known as the “Outside Lands” because they were inhospitable lands on the outskirts of the city, beginning with the trees planted at the west end of the park.

The original plans for the park were to keep it natural, with trees, gardens, playgrounds, and paths, to serve as a community backyard for the urbanites, but when the Midwinter International Exposition, a World’s Fair came around in 1894, many new attractions were constructed against the wishes of McLaren. Many of these remain in Golden Gate Park today as some of its biggest attractions, like the De Young Museum with its fine arts collections (though it was later rebuilt), the Japanese Tea Garden, and the Music Concourse.

Attractions of the Golden Gate Park

There are now many additional attractions in the park, like the California Academy of Science, which has both an aquarium and a planetarium, the Conservatory of Flowers, and the San Francisco Botanical Gardens.

While many visitors to Golden Gate Park flock to these main attractions, there’s something to be said for slowing down and enjoying the park’s simpler sites as its creator intended. Playgrounds and athletic fields like Kezar Stadium, the polo fields, a golf course and disc golf course, a tennis complex, and even horseshoe pits allow for all types of recreation. A historic carousel, built in 1914 and used in the Treasure Island World’s Fair, has been in place at the park since 1940, though it is the third carousel to operate in the park.

The park has five natural lakes, including the Chain of Lakes, as well as a series of man-made lakes, which are a great place for a peaceful stroll. The largest of the lakes is Stow Lake, a man-made lake containing Strawberry Hill, an island, within it. A boathouse nearby offers pedal boat and row boat rentals to go out on the water and get a better view of the Golden Gate Pavilion, the Chinese pagoda on Strawberry Hill. The island is also accessible on foot by the bridges that connect it, and offers hiking trails to its reservoir and 110-foot waterfall.

Miles of jogging and bike paths connect the treasures hidden inside the park, small touches to be stumbled upon – a reward for those who wander deeper into the park. These little spots are the greatest places in the park, exemplifying the spirit and culture of San Francisco. A dedication to preserving history, promoting both the arts and sciences are major parts of what makes San Francisco such a vibrant, beloved city, and Golden Gate Park is a manifestation of these ideals. The Cal Academy of Science stands directly across from the De Young Museum of fine arts, and small references to classical music and literary figures are found throughout the park. Monuments to historic cultural figures adorn the park, like Beethoven and Verdi, Schiller and Goethe, and a statue of Cervantes with his characters, Don Quixote and Sancho Panza kneeling at their creator’s feet. The Shakespeare Garden features only flowers mentioned in the playwright’s works. 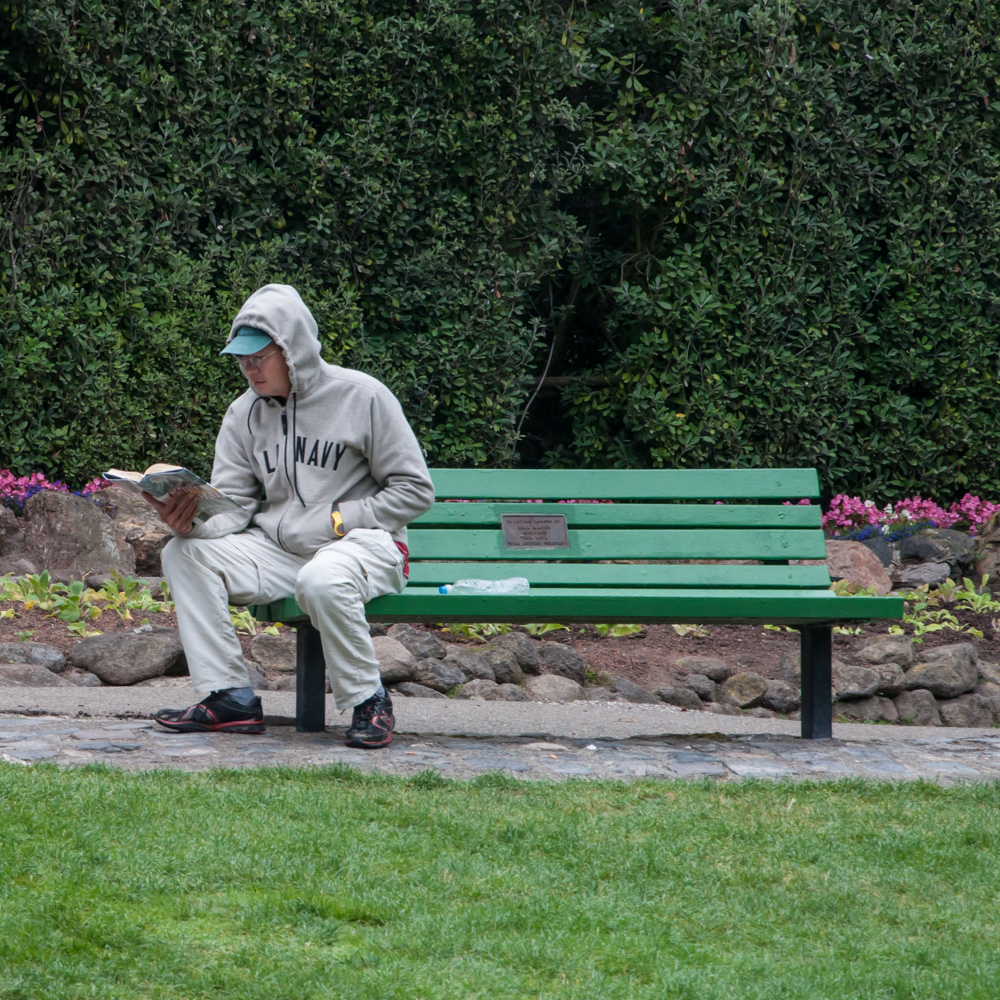 A great historical section in Golden Gate Park is the Arch of Colonial Trees, where in 1896, a tree from each of the original 13 colonies was planted. Though unfortunately many of the original trees have been replaced, the original New Hampshire Sugar Maple, Massachusetts Elm, New York White Oak, and the White Linden from New Jersey remain, a visual representation of the continuity of this park as well as the country. The bison paddock within the park is a clear effort to preserve American history.

Another significant historical site are the two windmills, installed at the western end of the park and were used to pump water into the park and cultivate the gardens, allowing for major changes to the park. The first was the Dutch Windmill in 1902, which stands along John F. Kennedy Drive near the Great Highway, while the Murphy Windmill was constructed just to the south beginning in 1905. The windmills are no longer in use, but they have been recently restored, and the Queen Wilhelmina Tulip Garden blooms every spring at the foot of the Dutch Windmill in her honor (when I visited in late summer, other flowers were in their place).

Golden Gate Park has played an important part in San Francisco cultural history, becoming a popular hangout during San Francisco’s Summer of Love, the site of protests, and the counterculture center at Hippie Hill. The National AIDS Memorial Grove, the first AIDS memorial in the United States is sanctuary of hope, healing, and remembrance for those affected by AIDS. 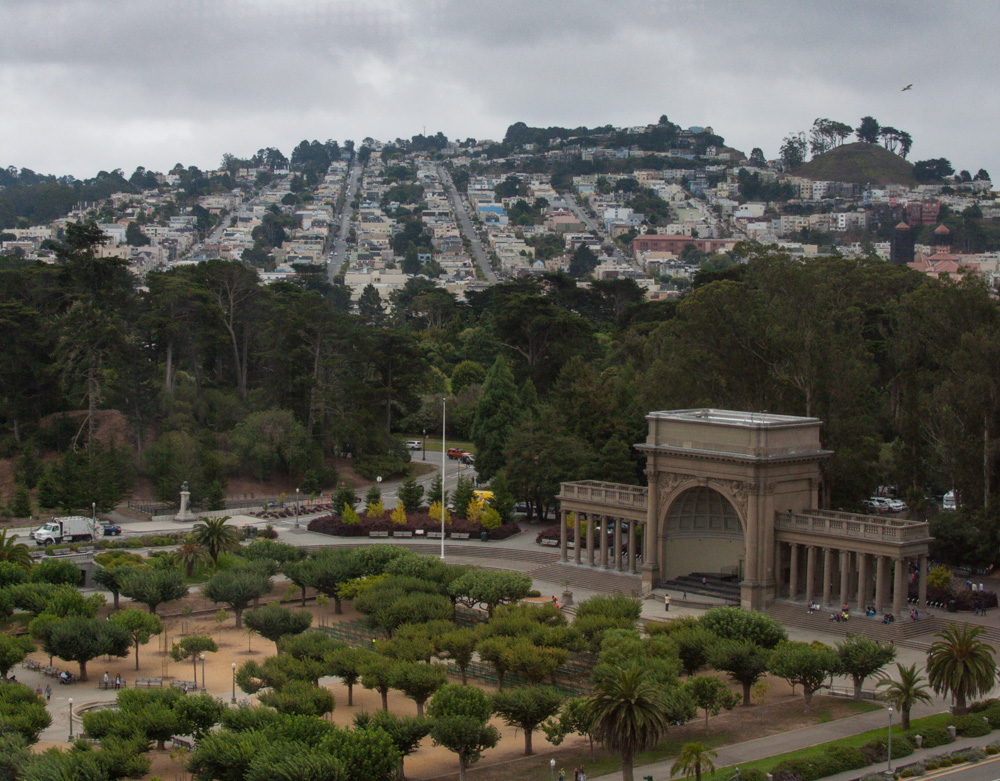 The park is known for hosting many major events, especially concerts and music festivals. Free concerts are held every Sunday during summer at the Spreckels Temple of Music (the Music Concourse). Each August, Outside Lands (its name a nod to the park’s history), a three-day music festival takes over the park, while the Hardly Strictly Bluegrass Festival is a free event each October.

I plan to attend as many of these events as possible over the coming year. Golden Gate Park has so much to offer, that it will take many trips to experience it all. I look forward to every day I will get to spend there, exploring the depths of the park.