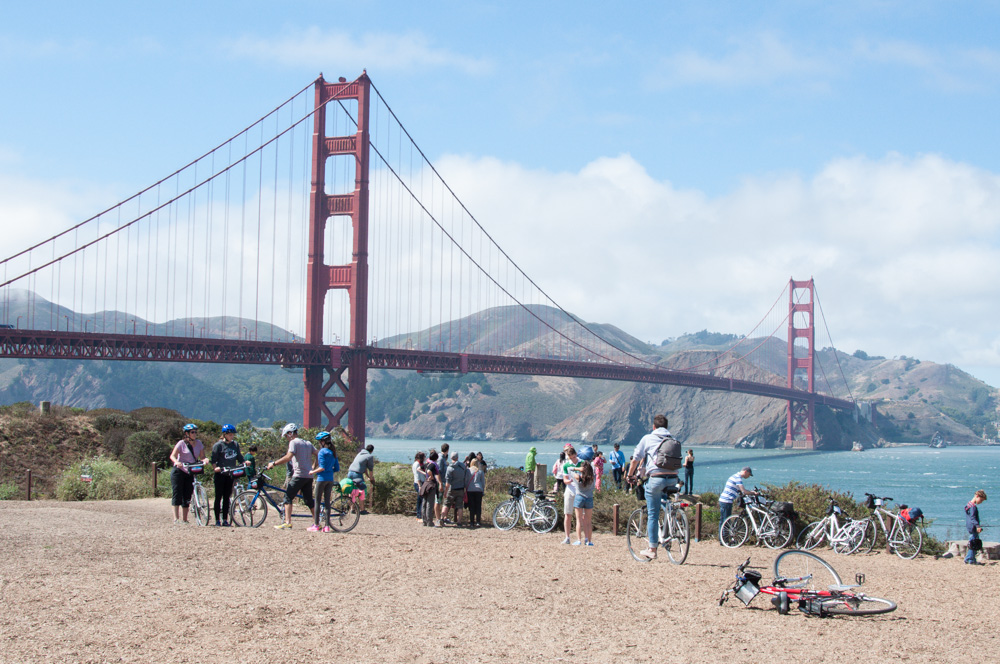 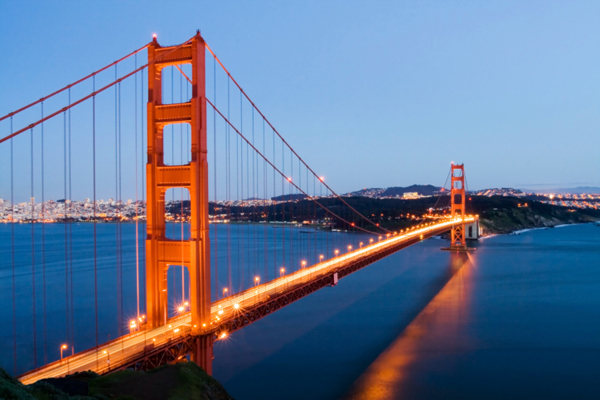 As a Bay Area native and local tourist, I’m often amazed to remember just how famous some of these San Francisco sites are around the world – I imagine it’s like growing up as one of Brad Pitt and Angelina Jolie’s kids, realizing that people all over the world care what your parents are doing on any given day, and that this is not normal. They’ve always been right there, so it’s easy to forget that they’re kind of a big deal.

This feeling is most apparent to me when I visit the Golden Gate Bridge – the icon of San Francisco and the city’s most famous landmark – hearing the immense variety of languages spoken by visitors who have made the pilgrimage here to cross the bridge, and seeing the photo shoots: a ballerina posing in an arabesque, blown over by gusts of wind, and a bride and groom, pausing their celebration for portraits in front of this monument. It’s the most photographed bridge in the world. You’ve seen it in movies and photos, and you’ve heard it referenced in numerous songs. It’s no surprise it feels like spotting a celebrity when you finally see it in person. 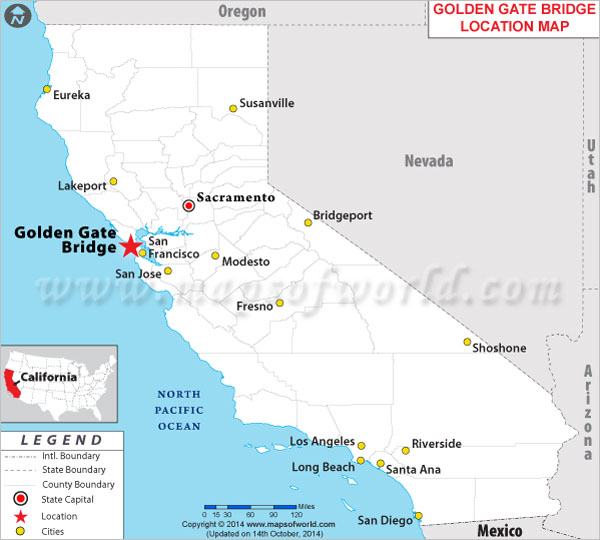 Explore the Detailed Map of San Francisco  and California Map

The Golden Gate Bridge has been listed as one of the Seven Wonders of the Modern World for its feat of engineering. Many doubted that the strong winds, thick fog, and rough waters would allow for its construction, calling it the bridge that couldn’t be built. Connecting San Francisco to Marin County, the bridge extends about 1.7 miles (2.7 kilometres). It spans the Golden Gate Strait, which was named by explorer and Army Captain John C. Fremont because it reminded him of the Golden Horn, a harbour in Istanbul.

Significance of the Golden Gate Bridge

The bridge was not named for its colour, nor was it ever meant to be gold, despite common misconception. I can’t count how many times I heard people wonder wryly “Why is it called the Golden Gate Bridge if it’s not even gold?” It’s more of a vermilion (red-orange). And despite the oft-repeated factoid that the bridge is painted end to end annually, the official website explains that it’s not; the paint is touched up regularly, as needed.

The colour, International Orange, was chosen in part for its visibility for ships when the fog blankets the bay – it can be seen from various places around the city like the trails at Lands End or around the corner from Lombard’s winding block. If the Navy had it their way, the bridge would have been painted with yellow and black stripes for optimal visibility. That sounds hideous, so let’s say thanks that it didn’t happen that way. The other reasons for the colour choice were that the paint protects the steel from corrosion and rust caused by the salty ocean air (though the paint base has switched from lead to zinc to protect it), and its warm colour contrasts the sky and the sea. 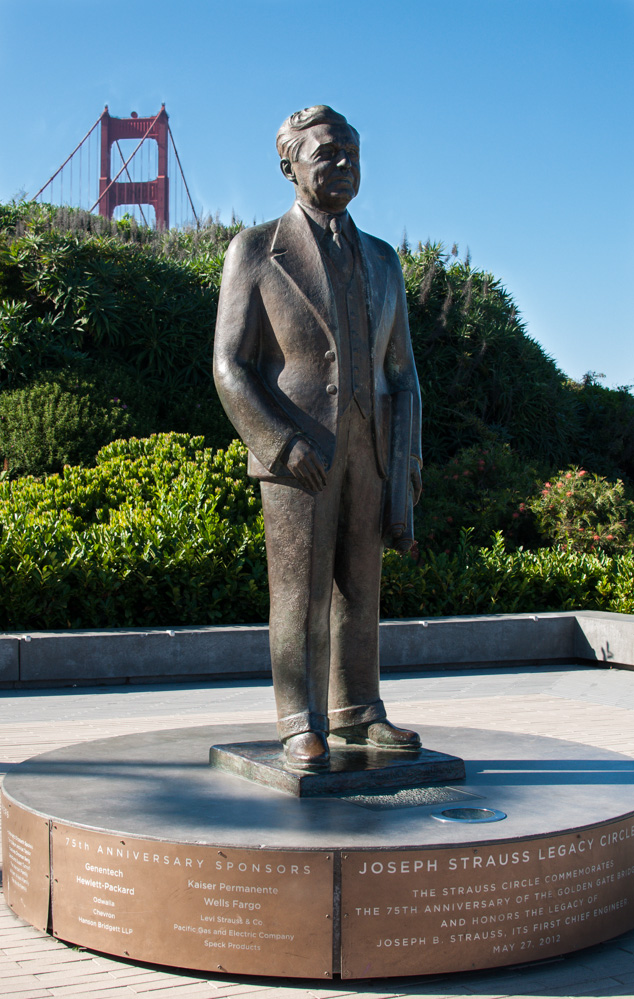 Joseph Strauss in front of the Golden Gate Bridge

The credit for the Golden Gate Bridge design usually goes to Joseph Strauss, who has been immortalized in a statue at the base of the bridge, but a team of designers, engineers, and architects contributed much of the design. The team included Leon Moisseiff Charles Alton Ellis, and Irving Morrow, who was responsible for the Art Deco style and the bridge’s colour.

Structure of the bridge

The Golden Gate Bridge is located at the convergence of Highways 101 and 1. It’s unusual in that its six lanes can reverse directions to accommodate the flow of traffic during rush hour. The Golden Gate was the first bridge in the world to begin charging tolls only for one direction of traffic, though many other bridges now follow that method, including all bridges around the Bay Area (all tolls are charged on trips toward San Francisco). In March 2013, the pay tolls on the Golden Gate Bridge moved to an all-electric system doing away with the stop-to-pay tolls. The drivers can pay the tolls via FasTrak by buying the transponder at one of the designated retailers, setting up an online account, and mounting the tag on the windshield. This is the only method that allows discounted carpool rate of $4.75, with three or more passengers and crossing through the toll readers in the designated carpool lane during rush hour. Other options include pre-paying for the trip via a License Plate account online or simply driving through and waiting for a toll invoice to be mailed to the vehicle’s registration address. License Plate accounts and toll invoices both charge $7.75 per trip, while FasTrak costs $6.75 (prices listed are for vehicles with two axles). Rental car companies usually offer an option for toll payment program, but it’s wise to check with them before making a rental reservation and before crossing any of the bridges.

Drive across the Golden Gate in your convertible to complete your reenactment of the Full House intro, blasting the theme song (or singing it if you didn’t come prepared – I know you know how it goes). That’s also a great way (for passengers) to get photos and videos from a different perspective.

In addition to driving across the bridge, a pedestrian walkway traverses the eastern edge of the bridge. Bike paths are located on either side – though cyclists on the eastern side were sometimes told that they could not ride their bikes there, despite the bicycle symbol painted on the sidewalk. Bike rentals are available from the Sports Basement not far from the bridge in the Presidio.

Approaching the bridge from the San Francisco side, there are a few lots along the Presidio where visitors can pay to park before walking out onto the bridge. Stop by the visitor’s center and gift shop at the new Bridge Pavilion, learn a bit about the bridge’s history and construction with their new interactive exhibits that demonstrate how the suspension cables work, grab some coffee to keep you warm from the Bridge Cafe (and maybe a snack for some energy for the walk ahead), and stop by the restrooms.

Bring a jacket (and maybe a scarf) no matter how warm it might be in the rest of the city or even the parking lot. Out over the water, the winds pick up and temperatures drop. While clear days offer great conditions for photos, the bridge is ethereal when wrapped in fog, which often creeps along its base around sunset and burns off in the late morning.

Facts and history aside, it really is a beautiful bridge (although those facts and history make it all the more impressive). Despite the countless photos and articles depicting the Golden Gate Bridge, it’s impossible to capture the way it makes you feel to stand in veneration at its base. It’s imposing, even sublime. On the bridge, it’s noisy and shaky, swaying slightly in the wind and rumbling with the traffic whizzing past, just feet away from pedestrians; it’s alive with frenetic activity. Walking across, you can stop to watch the ships pass beneath, the helicopters circling above, the windsurfers and kite surfers manoeuvring across the water. 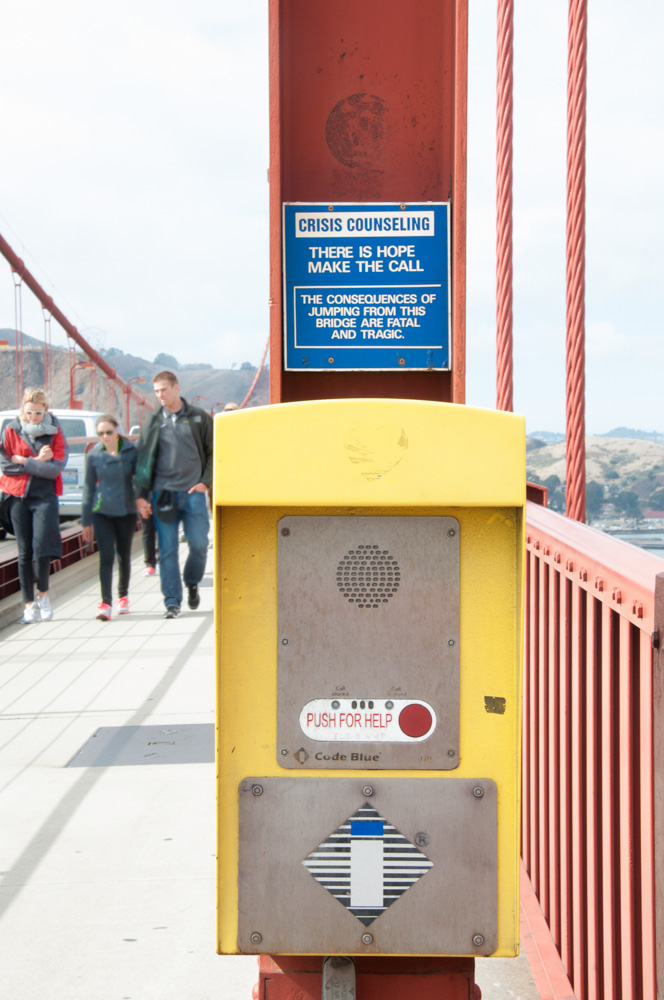 Crisis Counseling hotlines on the bridge

Signs and call boxes for a suicide crisis hotline offer messages of hope that things will get better, and serve as somber reminders of the dark side of the bridge that’s sometimes mentioned in the news, but that no one likes to talk about. The bridge holds a certain morbid allure for many depressed and distraught individuals who have leapt the 220 feet to their deaths in the frigid waters of the Bay. It could be because of the bridge’s status as a world famous bridge or its symbolism. The number of suicides from the Golden Gate Bridge is confirmed to be over 1,000, making it at least the second most common place for suicides in the world. The phenomenon, including stories from survivors, has been discussed in articles, books, and documentaries, which I never could bring myself to watch, but that evoke feelings of fear and sadness in me when I see the signs. Though for years, police, bridge workers, and bystanders have worked to talk people down and stop them from jumping, the power of the bridge continues to draw people looking to end their lives. A barrier net has finally been approved for installation along the bridge.

The magnitude of the Golden Gate Bridge is clear, palpable from every angle. It feels more authentic than other attractions in San Francisco – it’s not commercialized and you’re not assaulted everywhere you look with salesmen hawking overpriced trinkets. It wasn’t painted this colour in an attempt to draw visitors from around the world, but for practical reasons. It’s functional art. Some, like those who use the bridge as part of their daily commute, may say “It’s just a bridge!” And maybe it is. But it’s the Golden Gate Bridge and it’s a symbol of the city’s history of greatness, achieving the impossible, Westward Expansion, and a reminder of the early immigrants who entered the country through its gates. 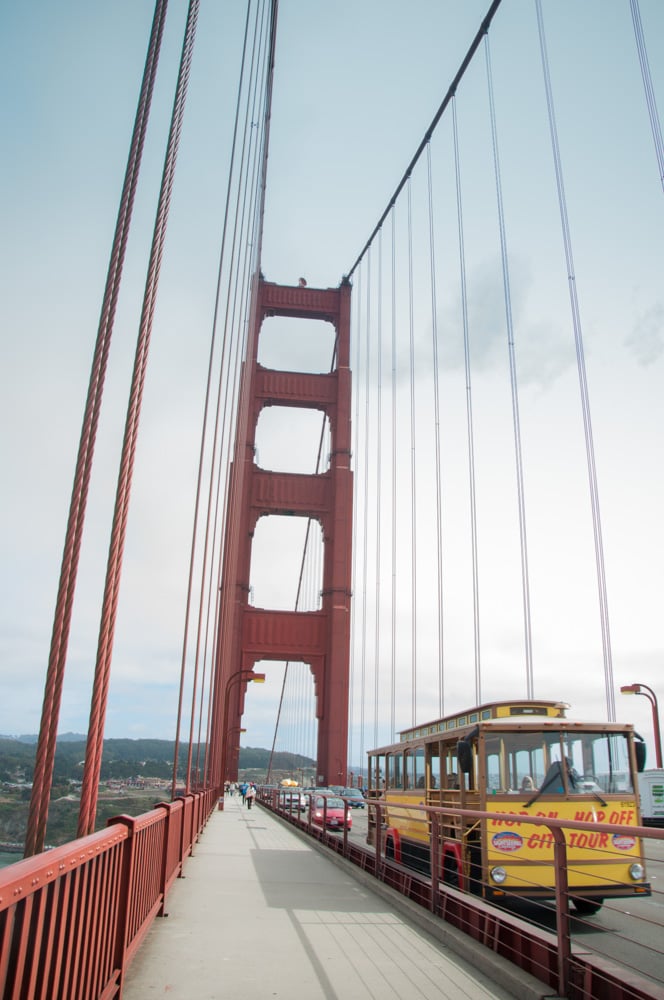 It may not be the oldest, longest, tallest or any other factual superlative – but it might be the greatest bridge in the world. So walk it, jog it, bike it, drive it, photograph it from every vista point you can find, and bask in the presence of one of the most famous bridges in the world.