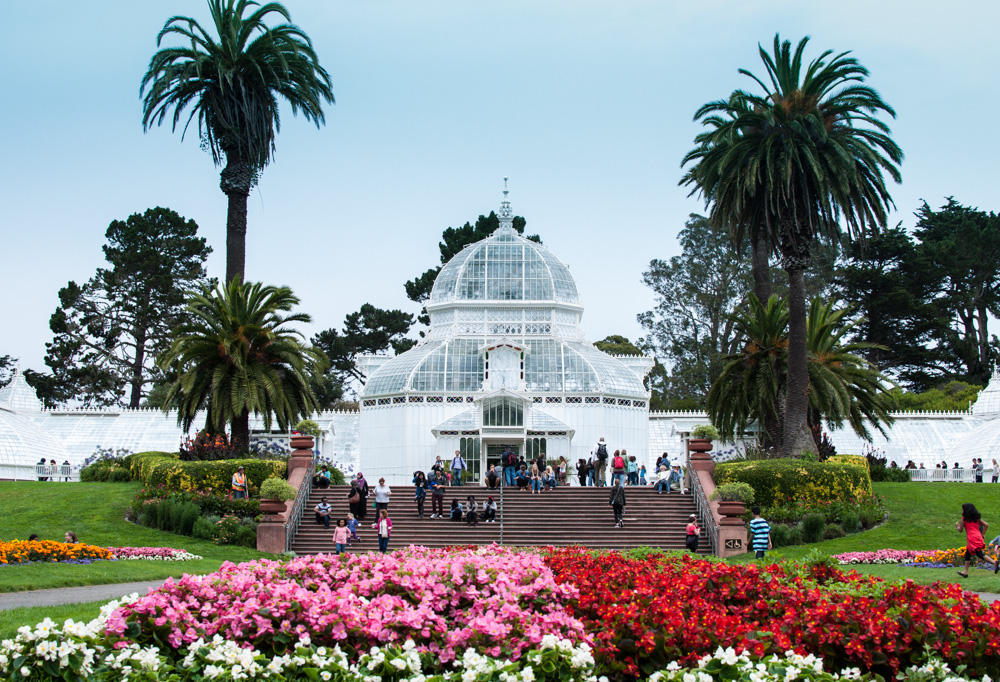 The Conservatory of Flowers in Golden Gate Park

Conservatory of Flowers – Located within Golden Gate Park, the Conservatory of Flowers features a collection of exotic plants in a beautiful historic building. Completed in 1878, the Victorian greenhouse is constructed of whitewashed glass and wood. The Conservatory is the oldest building in the park, and is listed in the National and California Registers of Historical Places, and is a California Historical Landmark and a San Francisco Designated Landmark. The building has been through a lot, from surviving the 1906 earthquake to sustaining damage in multiple fires and some severe storms.

The Conservatory of Flowers holds more than just flowers – in fact there seem to be far more flowers in the gardens outside the building than inside. The greenhouse is divided into five rooms, each with its own theme and climate, some of them hot and steamy.

On the first Tuesday of every month, the Conservatory of Flowers offers free admission to the public. Though no groups exceeding 12 were allowed, the building was crowded and there seemed to be several large groups of children (perhaps they each count as half a person). The admission on a regular day is just $8, (cheaper still for SF residents, students, and just $2 for kids under 11) – a small price to pay to avoid the cramped paths and save yourself from the smell that is the result of a hundred tourists crowded into a steam room, reminiscent of a hot yoga class.

The line to get in moved quickly, and we entered beneath the 60 foot dome into the Lowland Tropics room. There was supposed to be a guided tour through the Conservatory, but the guide was late to work and they weren’t sure when he’d show up, so we moved on without him. Filled with plants from the jungles of places like Brazil, Mexico, and Indonesia, the main room featured cash crops like cacao, coffee, and bananas.

To the left of the main dome is the potted plants room, a reference to the Victorian period when the Conservatory first opened, when exotic plants were rotated around their greenhouses in unique and artistic pots. The room is much like the backyard of your friend who loves gardening and doesn’t have quite enough room to fit everything.

You must pass through the gift shop to reach the room on the far left of the conservatory entrance, which is reserved for special exhibits. When I visited, this was CHOMP! They Came from the Swamp, the carnivorous plants collection. I know I wasn’t the only one hoping for some drama, like seeing a bug (or person) get snatched into a plant’s hungry little mouth (“It was Professor Plum, in the Conservatory, with the carnivorous plant!”). Anyone hoping to experience scenes from Little Shop of Horrors might be disappointed to learn that the plants are much smaller than in the movie (except the huge fake version of one in the corner) and far less active. The only horrors in this little shop are the heat and humidity, as the steam poured in from pipes on the ceiling, making me feel like a vegetable in the produce section of the supermarket getting misted. This combined with the intense crowds to make it nearly insufferable after a short while, despite the exhibit’s interesting contents. 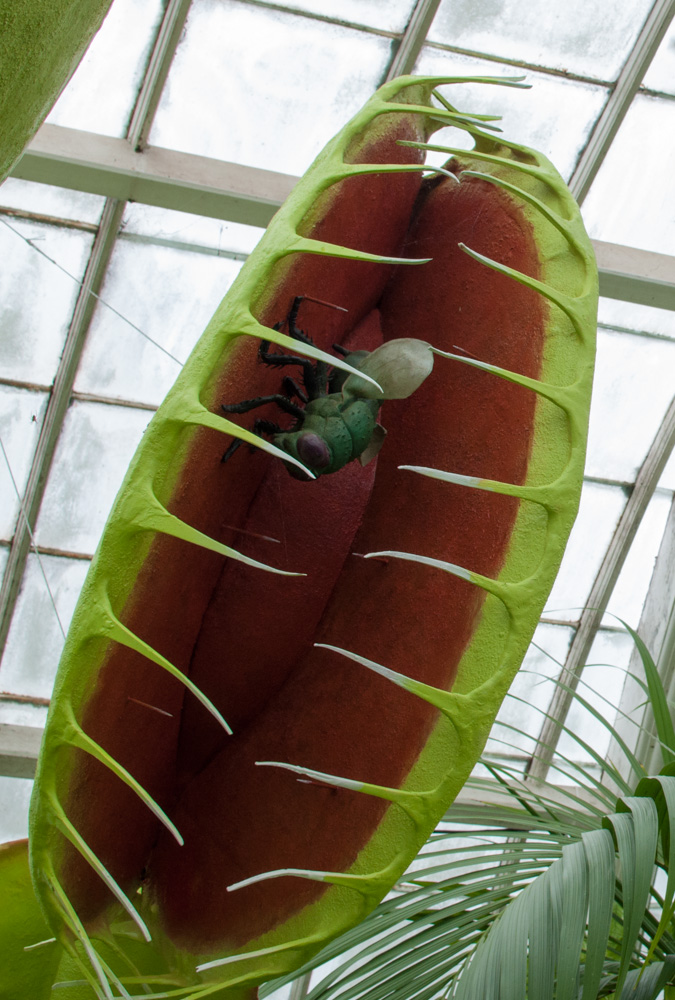 The carnivorous plants were fascinating and freaky, and certainly a highlight of the experience at the Conservatory of Flowers that day. For starters, I never knew how many types of carnivorous plants existed. These amazing miracles of evolution generally secrete enzymes to break down the proteins of their prey, which they then absorb, but their methods of luring and catching insects are varied. There’s your standard Venus Fly Trap, which I was disappointed to discover after purchasing one once, are not particularly good at catching flies: my roommate had to catch flies and place them inside the plant’s mouth in order to see anything happen. But there are also a few other types of carnivorous plants out there, even some that are native to California. There are pitcher plants, the intensely colored champagne glasses that collect rainwater, inviting thirsty bugs, “Come on inside, and can I offer you a drink?” before they slip down into the liquid and drown or become trapped and die a slow death by digestion. Oh, how the tables have turned, little bugs. The cobra plant, a type of pitcher plant that looks much like a cobra head complete with fangs, is native to California, though I’m sure I’ve never seen them in the wild. There are the unfortunately named bladderworts that don’t look very frightening, but can suck bugs into their bladders with an internal vacuum. And there’s the innocuously named sundews, which look like sea creatures with sticky tentacles that work like flypaper before they curl and grasp victims into their tiny fists. Savage little guys, aren’t they? 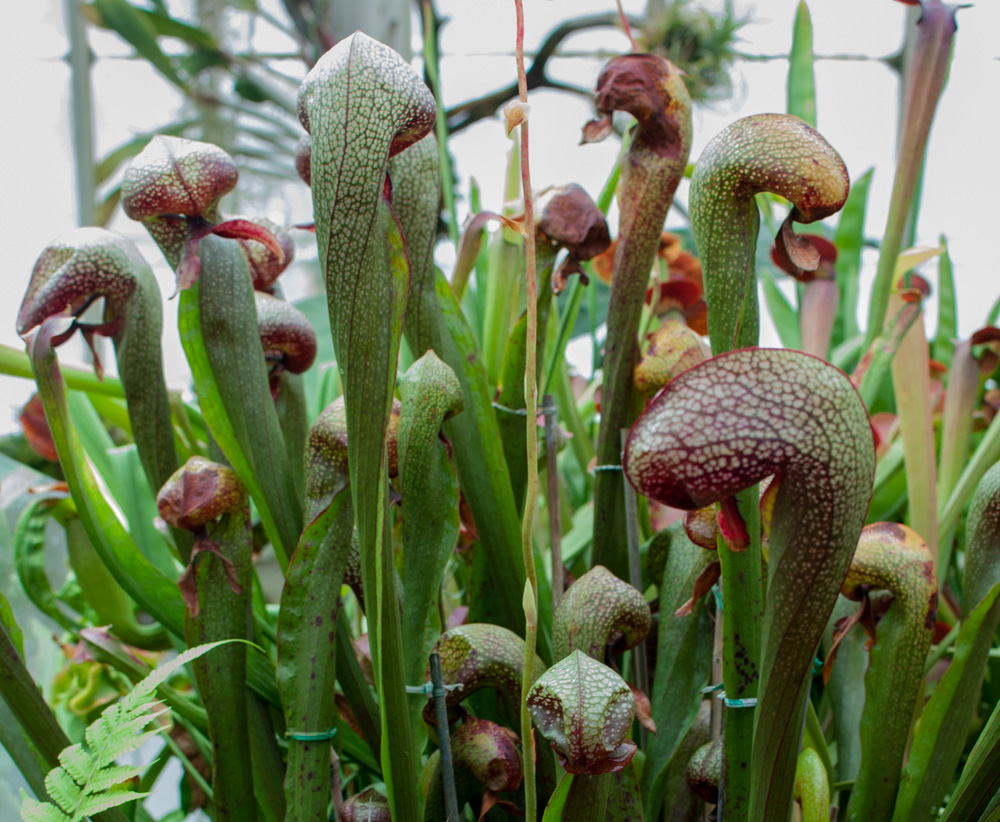 The room at the Conservatory may be the perfect habitat for these strange specimens, but it was not hospitable for me so I had to move on. On the other side of the main dome were the plants of the highland tropics, where the orchid collection can be found, displaying the vast variety of flowers that are in the orchid family. The orchids came in an incredible variety of colors and types.

To my relief, the rooms on this side of the building were pleasantly cool, though the air was still moist. Finally, the room on the farthest end is home to the aquatic plants which are found in the rivers of the tropics, like the Amazon, featuring ponds and water lilies in ponds.

The Conservatory of Flowers is a great spot for photo ops and a warm place to spend an hour or two to escape a gloomy San Francisco summer day (though dressing in layers is always advised). It’s worth the low entrance fees to avoid the intense crowds on free days, as the walking paths are cramped with foliage as it is.

Location of Conservatory of Flowers 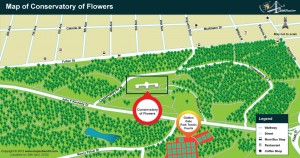 Map of Conservatory of Flowers