The Bison of Golden Gate Park 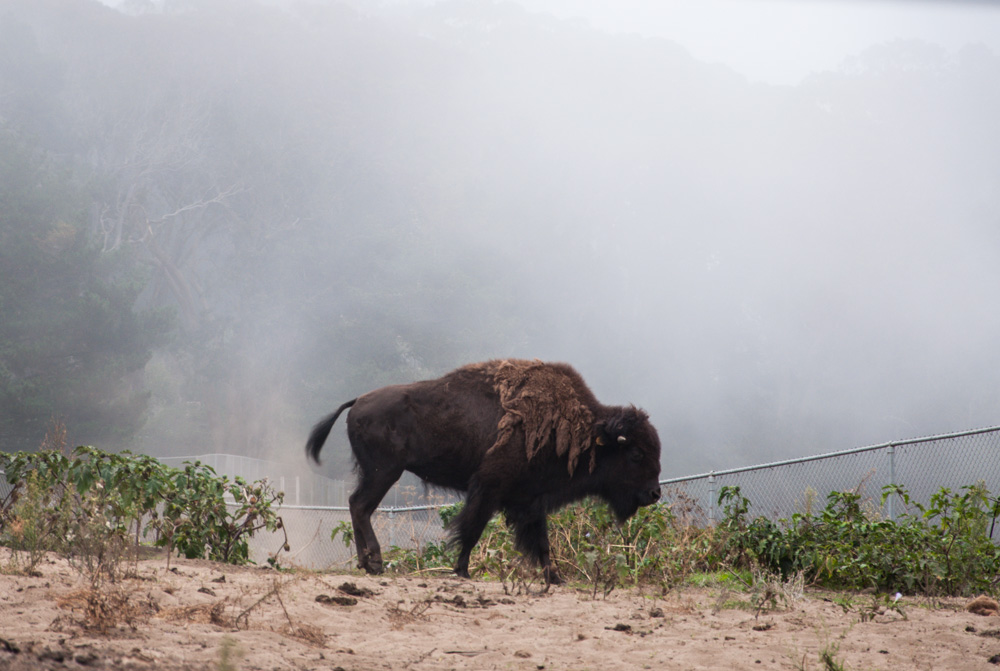 A bison in the fog of Golden Gate Park

A herd of American bison live in San Francisco. Golden Gate Park is where the buffalo roam. I know it sounds crazy (though not as crazy as the fact that a herd of real, live bison reside in Golden Gate Park), but for a long time after I first heard about the bison of Golden Gate Park, I imagined that they roamed free around the park, like the lions and giraffes you might see on safari in the Serengeti. I pictured them lounging lazily on the lawns of Sharon Meadow, stopping for a drink at Stow Lake, and traipsing through the exotic flowers at the Conservatory. I wondered how they got there (were they just passing through when the city suddenly sprang up around them, trapping them in the green space of Golden Gate Park?) and why they didn’t try to leave (did the busy streets make them nervous, too?). Even after I confidently, if stupidly, voiced these questions, and was informed (after a fair bit of mocking) that no, the bison do not roam freely around the park, I couldn’t quite shake that image from my head and I looked forward to the day when I might spot them in the wild.

That first time I saw the giant fauna of San Francisco, I happened upon them by accident. It was right after I finished my first ever half marathon, as I trekked an extra few miles through the park to reach the car. I was exhausted, sore, shivering in my mylar blanket and in desperate need of a bathroom. I looked up from my arduous trek, and was delighted to see the massive bison right over the fence from where I stood. It was a joyous, but brief moment to stand in awe of the majestic American beasts, before my physical my physical afflictions overtook my excitement, and I noticed the restroom just beyond the paddock. I snapped a quick picture of them, vowed to come back another day, and trudged on.

Unfortunately, every attempt to visit the bison since then has been far from as magical as that first time. I finally returned to the bison of San Francisco on a dreary afternoon, and was disappointed to find only a few bison in sight, far away from the fences. The paddock seemed too small and barren and they seemed sad or at least bored as they sat there in the dead grass. 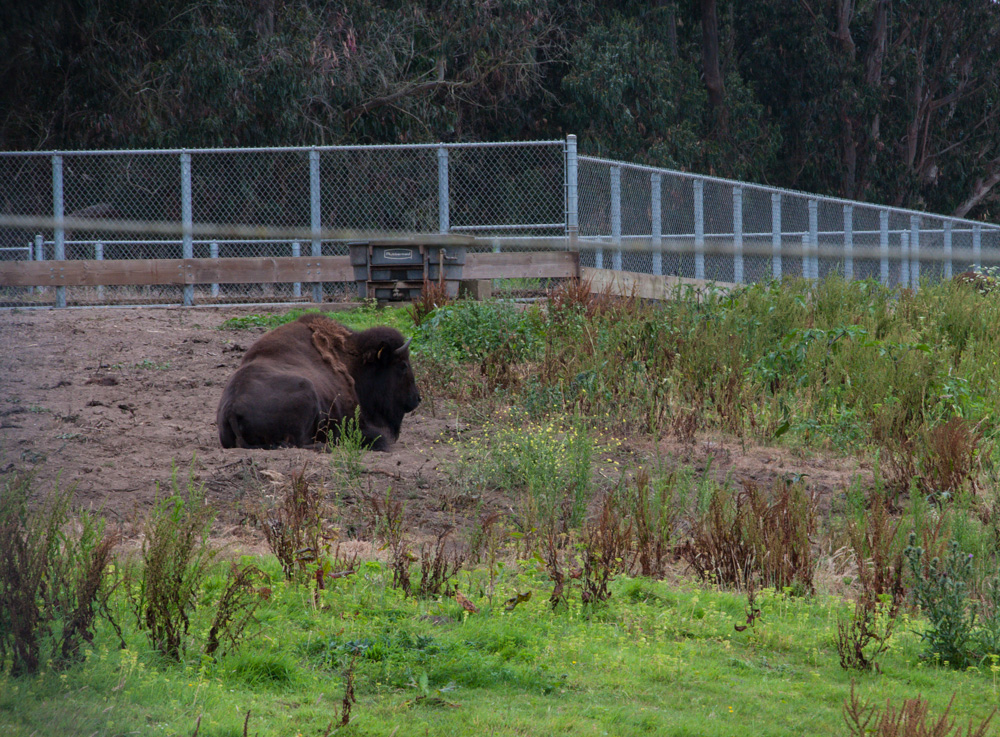 The bison paddock from JFK Drive

The bison are an important link to the land’s past, when the American bison really did roam free. Though up to 60 million bison once roamed the country, and were important to the Native American population who relied on bison as a source of food and materials with many uses. The American bison were hunted nearly to extinction when European settlers arrived and began trading for their furs, but their dwindling numbers have been increased by conservation and captive breeding efforts. (So no, bison are not extinct, like I overheard someone ask, but it sure would be fun to convince someone that the bison paddock is just a real-life Jurassic Park situation with bison instead of dinosaurs.)

Bison have been kept at Golden Gate Park since 1890, when the Park Commission brought the first of them from the Great Plains, when there were only about 1,000 bison remaining there. They later brought more from Yellowstone and the nation’s breeding program replenished their numbers. The herd grew to 30 bison at its largest, but due to diseases like tuberculosis, the numbers dwindled once again. In 1984, then-mayor of San Francisco Dianne Feinstein received bison as a gift for the city from her husband, Dick Blum. Those replenished the herd until 2011, when a group of 7 young bison were brought in. One of those baby bison died when a dog got loose in the paddock and startled the bison, probably causing it to run into a fence or tree. The area around the bison paddock is designated as an on-leash zone. The last of the old bison died in late 2014, and now only younger bison remain. There are currently only female bison in the herd. They are taken care of by the SF Zoological Society.

The paddock is easy to find, and is located along JFK Drive near Chain of Lakes Drive. A plaque along the sidewalk outside the fence marks their location and explains the history of the bison paddock. The bison are not all that active – they mostly stand or lie around, which explains why they were so easy to hunt when we played Oregon Trail. They don’t always seem to be there, and they’re often far from the sidewalk. You may have to walk around the side to get a better view, or stop by regularly for the chance to see them up close, where you can really appreciate their magnificence. On a foggy weekend afternoon, I saw them laying around on the hill at the far end of the paddock. I decided to follow the dirt path around the side of the fence (the left side, if you’re standing along the main road) to get a closer look. From there, I was able to have a much closer look, and could see the matted fur on their backs as they walked past me over to where their keeper had pulled up his truck and began preparing to feed them. One by one, they each stood and walked slowly to him, disappearing from view entirely, another fleeting moment of excitement at the bison paddock.

The bison of Golden Gate Park continue to serve as a reminder of our nation’s history. Their paddock is like a tiny free zoo, and is just one of the treasures tucked away in the green oasis of Golden Gate Park. I wouldn’t recommend making the trip to Golden Gate Park just for the bison, but when you’re around to visit one of the great museums, gardens, or greenery of the park, be sure to swing by and check them out.