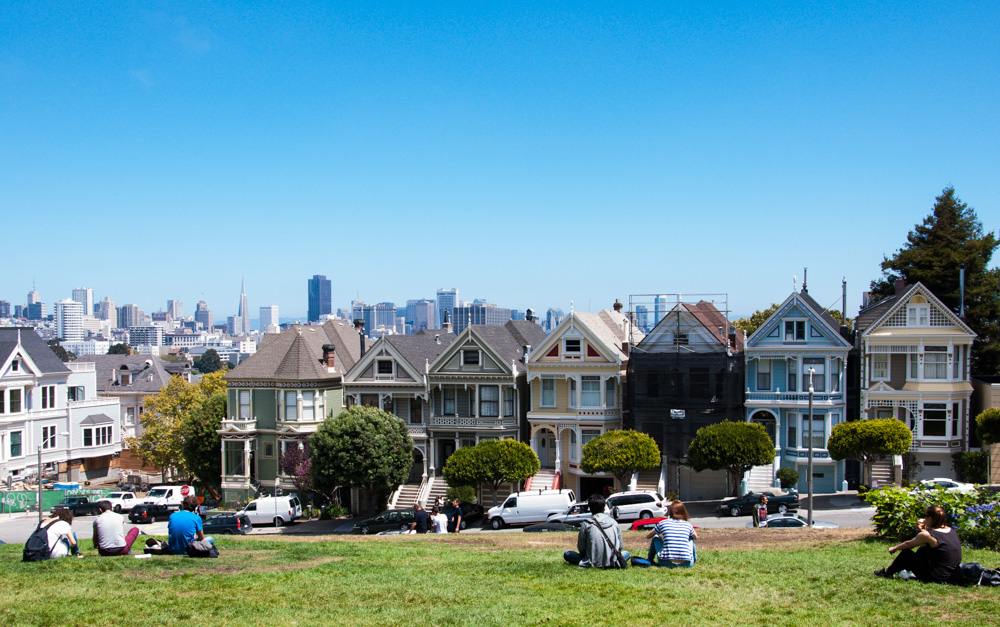 The Painted Ladies of Postcard Row in San Francisco

Alamo Square Park offers an iconic view of San Francisco – the “Painted Ladies” in front of the San Francisco skyline, including the Transamerica Pyramid, in the background. The old Victorian architecture is juxtaposed with the new, modern skyscrapers. It’s the view pictured on countless postcards sent from San Francisco, earning the strip of houses the nickname “postcard row.” 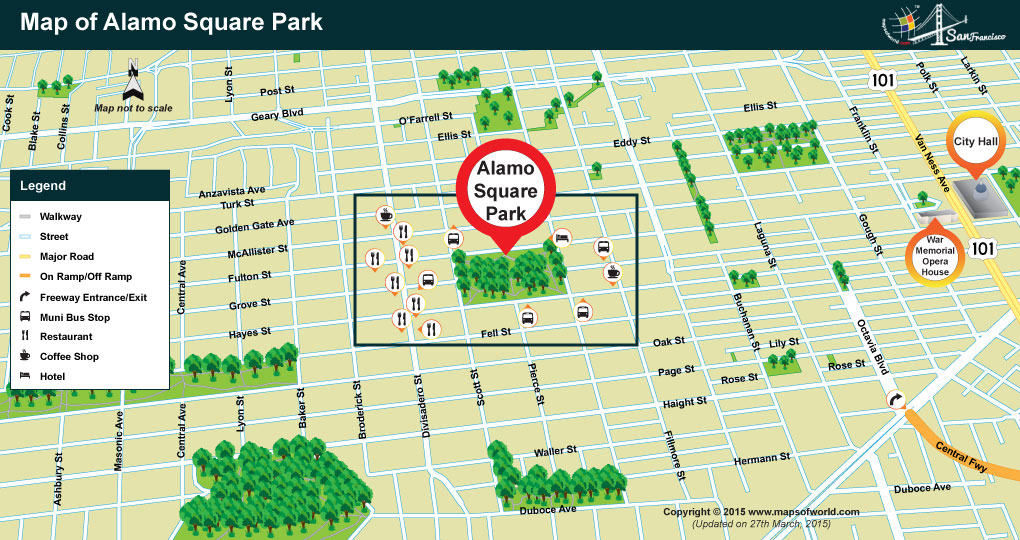 Where is Alamo Square Park ?

A neighborhood within the Western Addition, Alamo Square is a residential area featuring a large park set atop a hill, surrounded by ornate houses with interesting architecture and painted various colors. The Alamo Square Park occupies about four blocks between Fulton, Steiner, Hayes, and Scott streets. The famed Painted Ladies are located on the block of Steiner Street between Grove and Hayes, but there are beautiful historic houses located all around the park. The historic homes around the park were built from the 1870’s to the 1920’s, and include mansions like the Westerfeld House on a corner of the park opposite the Painted Ladies.

It is not apparent from most photos that the entire Alamo Square Park is situated upon a high hill, but it is great that it does sit at a higher elevation, because it provides great views of the cityscape beyond the houses, making the perfect backdrop for photos. In addition to the Transamerica Pyramid, the Bay Bridge and even the Golden Gate Bridge are sometimes visible, as is Sutro Tower on Twin Peaks. From Fulton Street, there’s a perfect view of the ornate City Hall building.

Alamo Square Park and especially the Painted Ladies are frequently featured in pop culture, including The Invasion of the Body Snatchers, The Five-Year Engagement, Junior, which has ranked highly on lists of worst comedies of all time and stars none other than our former Governator, and about 70 other movies and TV shows. The Alamo Square Park is probably most famous (at least to 90s kids like me) as the setting for the family picnic in the opening credits to Full House (also known as “The Michelle Show” and the pinnacle of the Olsen twins’ existence). Unsurprisingly, the top of the hill directly across from the Painted Ladies is covered with groups of people enjoying a picnic on this summer afternoon. What ever happened to predictability, you ask? Well, I found it here. I also found parents telling their kids, you know those houses over there? That’s where the Tanner family lived! No. Nope. Wrong. A little girl asked her mom, “Which one did they live in?” and the mother replied “I don’t know, maybe the yellow one?” HAVE MERCY. Sigh. Yes, these Victorians were shown in the intro montage of Full House, but no, the family did not live in one of them. The show was, of course, shot on a lot in Los Angeles, but the house they often portrayed as the Tanner family residence is located about a mile away on Broderick Street. Glad we have that cleared up. 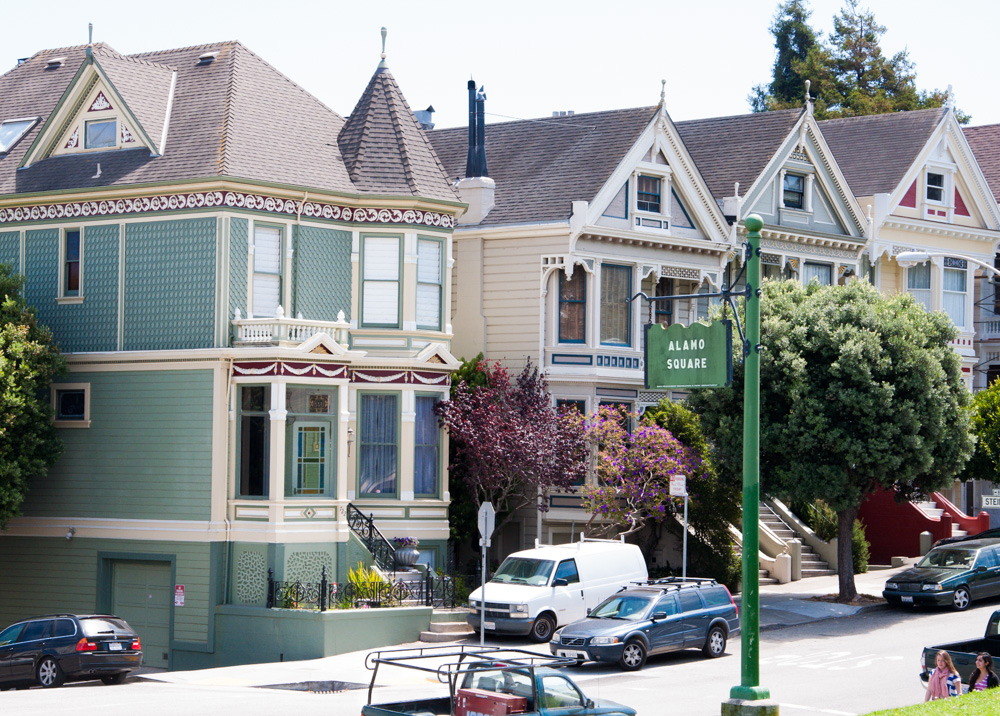 The row of Victorian houses on Steiner Street features some of the most famous houses and certainly some of the most photographed homes ever. They’re so photogenic with their delicate details and varied colors, with the perfect backdrop. The six of them are so similar in structure and close together, it reminds me of a group of women, all made up and dressed in Victorian dresses for a portrait in front of the San Francisco skyline. These Painted Ladies are sometimes called the Seven Sisters, but then I feel a bit bad for the chubby sister way off to the left (let’s call her Khloe), larger and not quite fitting in, but also a little better than the rest. I don’t feel too bad, though, since that house (on the corner of Grove and Steiner), is about 1,000 square feet larger than the others and sold for about $3.1 million in June 2014. These houses rarely go up for sale, but despite their historical significance, living in a tourist attraction isn’t everyone’s ideal and the house took some time and a price cut to sell.

This row of Alamo Square Park Houses was built from 1892 to 1896, all by the same developer, Matthew Kavanaugh, which explains why the six are so similar. The larger Queen Anne on the corner was the first built, and the one in which Kavanaugh himself lived. Next door to the corner house lived the row’s most notable former resident, Alice Walker, author of The Color Purple and human rights activist, who resided there during the 1990s.

These Alamo Square Park Houses, along with others in the same style that can be found around the city, are known as Painted Ladies because their original designs featured at least three colors of paint, accentuating the ornate architecture. Today, the houses in this row are painted in one, much more subdued color, though each is a different color, some with pale shades of yellow, blue, purple, and green. Many of the other houses in this style that were built around the same time were destroyed in the 1906 earthquake, but this row along Alamo Square Park was spared, making them some of the oldest homes in the city. They’ve been through a lot of changes, like being divided up into multiple apartments before turning back into single-family homes, and the neighborhood has vastly improved since Postcard Row gained notoriety. For a period beginning in the 1950s and continuing into the 1970s, the neighborhood was overrun with drugs, and muggings and other crimes were rampant. Some of the Painted Ladies themselves became boarding houses filled with hippies. Improvement projects brought the area back to its former glory.

Attractions near to Alamo Square Park

The Victorians and Alamo Square are one of the San Francisco attractions I had never visited before, though it all felt so familiar thanks to their frequent presence on my television set. I hadn’t made the trip, mostly because I had never had a reason and it never seemed important enough for a detour. It’s mostly a neighborhood and some great architecture and a park, and if I lived nearby like the Tanners, I’d enjoy picnics at the Alamo Square park and bringing my dogs to the dog park area. When I finally did go this summer, one of the Seven Sisters was undergoing repairs and covered with scaffolding, which kind of ruins the pretty postcard photos. 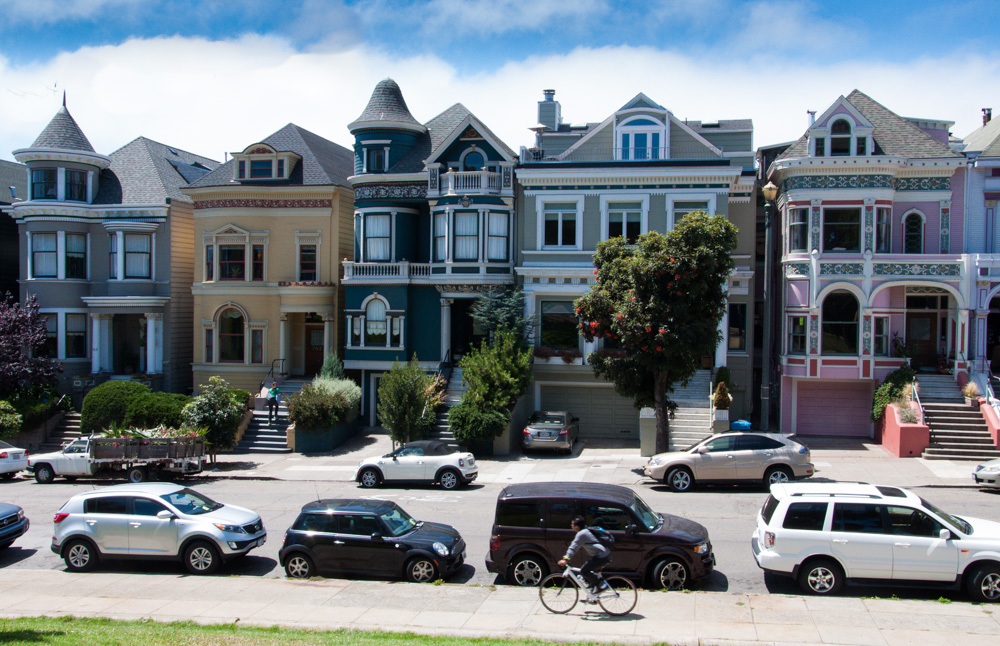 The Victorians opposite Postcard Row

The western end of the Alamo Square Park, away from Postcard Row and the continuous stream of tourists taking photos, the Alamo Square Park becomes an off-leash dog park (dogs must be leashed on the eastern side), and there were many dogs running around in packs when I visited. Also in the Alamo Square Park, there are tennis courts, playgrounds, and some public restrooms, which were surprisingly constructed of mostly marble, which you would think would be easy to keep clean, but they weren’t. The Alamo Square park is slated for some major repairs and renovations in the second half of 2014. Next on the docket for transformations around Alamo Square Park might be banning the tour buses from barking facts about the homes into their loudspeakers as they pass, if the residents have their way.