The town is named after Naini Lake which, is again named after goddess Nain. According to the Hindu mythology the lake is one of the 64 Shakti Peeths; where parts of the charred body of Sati (Parvati) fell while being carried by Lord Shiva. The spot where Sati's eyes (or Nain) fell, came to be called Nain-tal. There is a temple dedicated to goddess Nain on the edge of the lake. Nainital is a gorgeous town that still retains some of its colonial charm. Few bungalows from that era still survives today including the Gurney House which was once occupied by the Jim Corbett and his family. Since its foundation and the construction of the first European house in 1841, it has always been a popular getaway for British officers and their families who served in the Army, trying to escape the brooding heat of the Indian plain in summer. 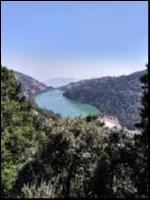