Gurugram, is a city in the Indian state of Haryana and is located near the National Capital Region of India. It is 32 kilometres (20 mi) southwest of New Delhi and 268 kilometres (167 mi) southwest of Chandigarh, the state capital. As of 2011, Gurugram had a population of 876,824. Witnessing rapid urbanisation, Gurugram has become a leading financial and industrial hub with the third highest per capita income in India. The city's economic growth story started when the leading Indian automobile manufacturer Maruti Suzuki India Limited established a manufacturing plant in Gurugram in the 1970s. Today, Gurugram has local offices for more than 250 Fortune 500 companies. 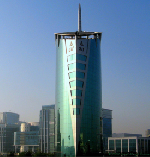