The city is popular for being the first planned city in India after independence and was designed by the Swiss born, French architect Le Corbusier and is well known for its urban design. The name Chandigarh means "The Fort of Chandi" and the city gets its name from an ancient temple called Chandi Mandir, which is dedicated to the Hindu Goddess Chandi, near the city. Chandigarh was also reported to be the cleanest city in India in 2010, by a national government study. 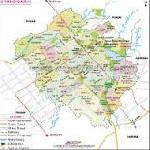