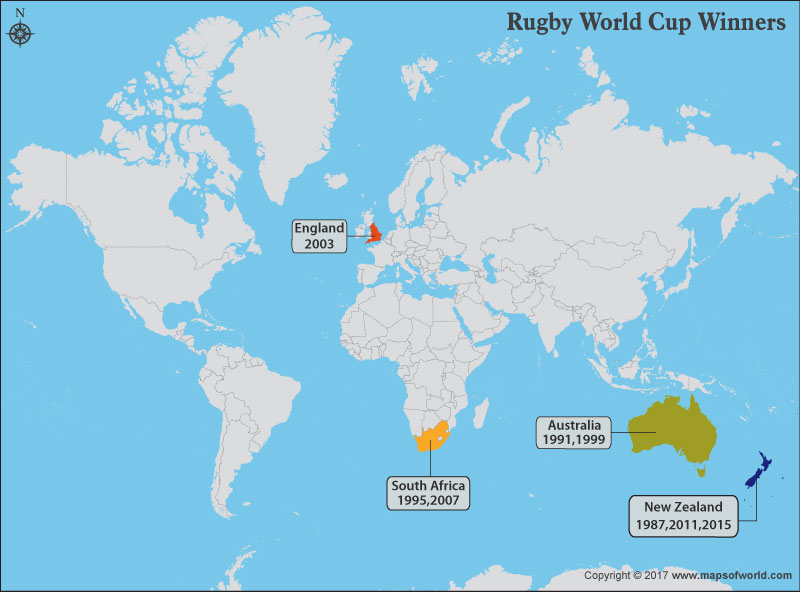 Rugby is among the top ten most popular sports in the world and has millions fans around the world. The game which originated in England, is a form of football but here, unlike in football, the ball has to be carried by the player in his hands to the goalpost. Over the years, the popularity of the sport has transcended the boundaries of England. Apart from England, Wales, Ireland and Scotland, the sport has garnered an immense fan following in France. South Africa, Australia, New Zealand and Japan to name a few.

The sport received a shot in the arm in 1987 when the inaugural Rugby World Cup was held. The tournament witnessed the participation of 16 teams who vied with each other for the prestigious cup. The tournament, which comprised 32 matches, saw an attendance of 604,500 people. The event was hosted by Australia and New Zealand. In the finals, New Zealand defeated France to pick up the cup. The third and fourth spot went to Wales and Australia.

The second edition of the event was held in 1991 in England, France, Ireland Scotland & Wales and saw Australia emerging at the top. They defeated England 12-6. The 1987 winners were pushed to the third spot while the fourth went to Scotland.

South Africa, the host country for the 1995 Rugby World Cup, defeated New Zealand to win the cup. The 1991 winner Australia could not make it among the top four as France bagged the third spot and England the fourth.

Australia got the better of France to win the 1999 edition of the tournament held in Wales. South Africa, the winner of the 1995 tournament, were pushed to the third spot, while New Zealand was fourth.

In the 2003 Rugby World Cup, Australia was beaten by England in their own backyard. England won the cup for the first time since its inception in 1987. New Zealand and France occupied the third and the fourth spot.

France hosted the World Cup for the first time in 2007 and the event also saw Argentina making it to the top four. The event was won by South Africa who defeated England and the third and fourth place went to Argentina and France.

New Zealand won both the 2011 and 2015 editions, which were hosted by New Zealand and England with the runners up being France and Australia.