Countries where road accident injury is the main killer 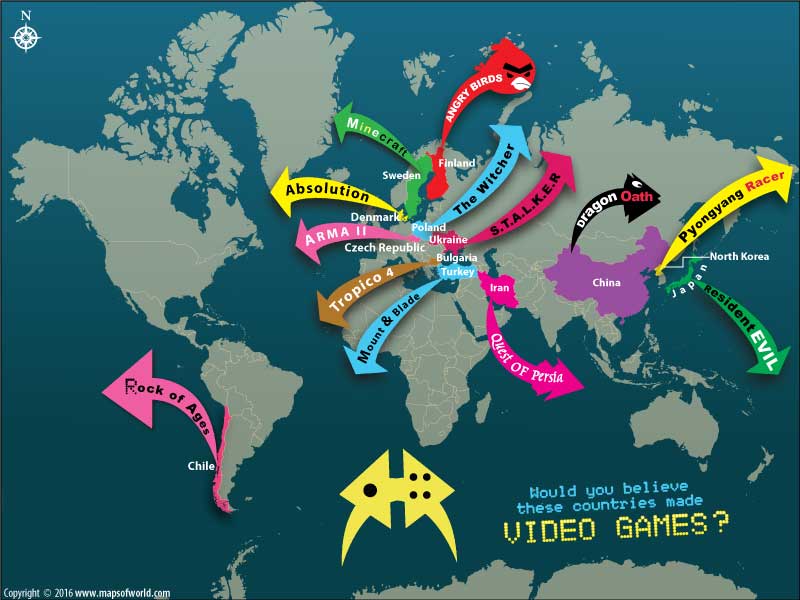 Video games can be fun, entertaining, invigorating and, at times, may even impart knowledge. But when you play that exciting video game on your laptop or mobile, have you ever wondered in which country did the game originate? If you are thinking that minecraft was created in the US, you would be thoroughly disappointed to know that it was, in fact, created in Sweden. Let us take a look at some popular video games which were created in countries that you were least expecting.

When Markus “Notch” Persson, a Swedish game designer created the exciting game of Minecraft, little would he have known that it would become one of the most popular games worldwide, and within two months of its release would cross the one million purchases’ mark. The game has sold a whopping 106 million copies across all platforms as of June 2016. Apart from building constructions out of textured cubes, gamers can also indulge in resource, combat and crafting.

Angry Birds is all about a couple of multi-colored birds who are making a desperate attempt to save their eggs from dangerous green colored pigs. Created by Rovio Entertainment, a Sweden-based company, Angry Birds has become the most downloaded game as it has collectively been downloaded a whopping three billion times.

Developed by the Chilean ACE Team, Rock of Ages is an exciting tower defense racing video game. The video has received favorable reviews and attracts gamers from all across the world.

North Korea is not only good at launching missiles, it has also created a couple of stupendous video games and one of these is the Pyongyang Racer. Developed by a few students of Kim Chaek University of Technology, the game is about the user driving a car Hwiparam II on Pyongyang streets. The game has received flak but has also gained popularity as it provides the gamer with a glimpse of Pyongyang’s layout without actually having to visit the city.

Who would expect Iran to make a video game and that too, an awesome one. An action-packed video game, the Quest of Persia is a series which comprises three games – The End of Innocence, Lotfali Khan Zand and Nader’s Blade.

Created by the Polish video game developer CD Projekt, the Witcher is set in a medieval fantasy world. The story of the game revolves around a Witcher – Geralt of Rivia. A popular game, it has received rave reviews from gamers and critics alike.

A survival horror video game, S.T.A.L.K.E.R. is set in the The Zone, an area surrounding the site where the deadly Chernobyl accident took place. Though not for the faint-hearted, the game has received applause from all quarters.

Developed by the Danish company, IO Interactive, Hitman: Absolution is a highly popular video game selling more than 3.6 million copies as of 2013. In the video game, the player can take on the role of a hitman. Though the video game has received positive reviews but it also has its share of controversies. The trailer of “Attack of the Saints” was heavily criticized for its sexist depiction of women. In the trailer, nuns, clad in Latex and PVC, are done to death in a hail of bullets.

Top Ten Countries Spending Most On Console And Computer Game

Countries where road accident injury is the main killer