What are the popular places to visit in Madrid? - Answers

Barcelona may look attractive, but Madrid teaches you how beautiful Spain is. Foaming Cibeles Fountain, bubbling Spanish wines, balmy summer nights, Bohemian lifestyle, chic fashion streets, and roaring bull-fights create an image of this city – an irrefutable home to The Garden of Earthly Delights. Most capital cities in Europe either sprang up along rivers or were frontier cities of the Roman Empire. However, the capital city of Spain is an exception. 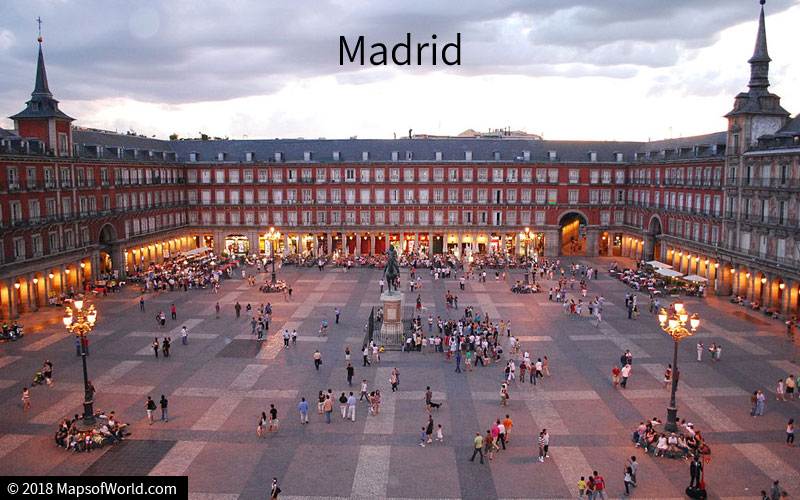 Places to Visit in Madrid

Royal Palace of Madrid (Palacio Real de Madrid) – This is the largest and perhaps the most lavish official building in the city standing next to the Plaza de Oriente square. Almudeana Cathedral and Sabatini Gardens in front add more value to this royal residence.

El Escorial – Located 28 mile northwest from the city center, this imperial building complex is the symbol of Spanish Renaissance. The area includes a royal library, palace gardens, college, and an envious collection of paintings, manuscripts, and sculptures. El Escorial and Palacio Real de Aranjeuz are the former residences of the King of Spain.

Puerta del Sol – This semi-circular landmark square in the center of the Spanish capital has seen history unfold. Also called the ‘Gate of The Sun’, the square has a statue of King Carlos III and a 20-ton bronze statue of El Oso y El Madroño — the emblem of the city.

Main Square (Plaza Mayor) – Just a few blocks away from Puerta del Sol is the expansive opening of rectangular Plaza Mayor. It has been the epicenter of festivities, urban parties, and bull-fighting.

El Rastro – It is the largest open-air flea market in the city. Every Sunday tourists throng the market to look for antiques, apparels, vinyl records, and odd souvenirs.

Things to Do in Madrid

Living like a local – even for a few days – is the only way to know a city’s heart and soul. From treasure hunting in shopping markets to basking in the sun in suburban parks, you, too, can understand the local lore.

Go Shopping – While Bob Dylan might have lusted for boots of Spanish leather, your wish list can be longer, especially when you are in the fashion capital of Spain. The Mercado de San Miguel, Calle Preciados, and El Rastro have been the usual strolls for bargain-hunters. Calle de Goya, Chueca, and Serrano are the places for upscale and avant-garde shoppers.

‘Guernica’ by Picasso is the prized possession of Museo Nacional Centro de Arte Reina Sofía. While Thyssen-Bornemisza Museum features more than 775 precious artworks of the 20th century, CaixaForum Museum is the latest star on the map of Madrid.

Ride on Cable Car – To get an amazing bird’s-eye view of Manzanares River and the city parks, take the 15-minute ride in Teleférico de Madrid (cable car).

Try Wine Tasting – To discover the Spanish wine culture, you can take single day excursions to the countryside, replete with wineries and some of the best wine clubs.

Take a walk on Gran Vía – This street is famous for a throbbing nightlife. Tagged as ‘Street that Never Sleeps’ and ‘Spanish Broadway,’ this shopping district also showcases Madrid’s most notable 20th-century buildings.

Sobrino de Botín – the oldest restaurant still running in the world – serves delicious Grilled Filet Mignon and Garlic Shrimps. Cocido Madrileño, Paella, Tapas, and Gazpacho are other favorite local cuisines that you can feast on. Corral de la Morería, La Barraca, Bar Che Pibita, La Gabinoteca, and Restaurante Cornucopia are some of the popular eateries that serve you best Spanish dishes with a pinch of delight.

September to October or April to June are those times of the year when you see Madrid in its full glory. Weather remains mild and it is comfortable to walk around the city. Moreover, if you want to enjoy the Mediterranean climate and do not mind the heat, July and August should be a good time.

By Air – Adolfo Suárez Madrid-Barajas Airport is located only 8 mile from the city center. It is accessible via 24-hour express bus service that covers all four terminals.

By Train – The Dense network of Metro interconnects all the neighborhoods of Madrid. The Cercanías Madrid – commuter rail service – is used for faster and longer travels within the metropolitan area. Madrid Atocha railway station is a primary station for all intercity, regional, and long-distance trains.