What are the popular places to visit in Florence? - Answers 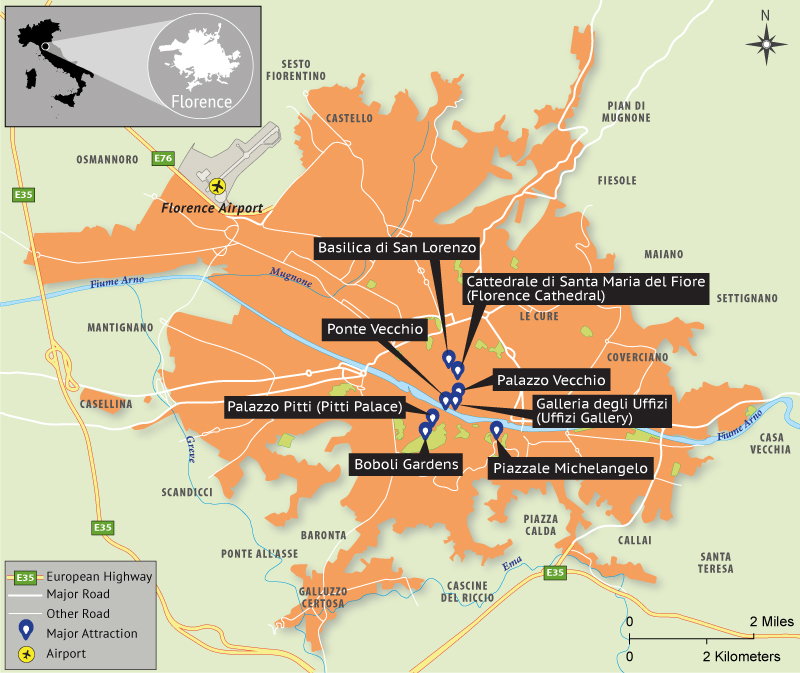 Florence, a beautiful city that spawned Renaissance and opera music, is a microcosm where art and culture have harmoniously thrived for centuries. Immerse yourself in the ‘The City of Lillies’ with its Florentine beauty of yesteryear churches, mighty museums, quaint alleyways, and staid palaces. Birthplace of Botticelli, Michelangelo, and Da Vinci, a culinary jewel of the Tuscan region, and a grandiose witness of the bygone Roman era, Florence is also known as ‘the Athens of the Middle Ages.’

Places to Visit in Florence

Cattedrale di Santa Maria del Fiore (Florence Cathedral) – Popularly known as the Duomo, with its magnificent Renaissance dome, this cathedral dominates the skyline of the city. It was completed in 1436, and this Gothic structure is one of the largest churches in the world. It is a UNESCO World Heritage Site since 1982 and is located in Piazza del Duomo (Cathedral Square) in the historic center of Florence. Stained glass windows, detailed frescoes, ornate mosaics, and significant artworks make the interior as exquisite as its grand facade. Its 45-meter wide dome, decked in green and pink colors, is the largest brick dome ever constructed.

Galleria degli Uffizi (Uffizi Gallery) – A must visit place for any art aficionado; this prominent art museum houses the world’s most massive ensemble of Renaissance paintings from the heydays of Medieval, Baroque, and Mannerist eras. Established in 1581, its exhibitions include artworks from Italian giants like Duccio, Botticelli, Leonardo da Vinci, and Raphael to many European artists as well. The stone building of Loggia Della Signoria, adjoining the Uffizi, exhibits several bronze and marble statues such as Medici lions, Hercules and Nessus, and The Rape of the Sabine Women.

Palazzo Vecchio – A significant symbol of civil power, this palace comprises Roman ruins, a Medieval fortress, and amazing Renaissance chambers. Its panelled ceilings, large chapels, golden decorations, imposing chambers, and vast courtyards leave visitors enthralled. The palace is located at the city’s most famous square – Piazza della Signoria – that was the center of political life and a scene of great triumphs for centuries. Main attractions around this L-shaped square are a replica of Michelangelo’s Statue of David, Fountain of Neptune, Perseus with the Head of Medusa, and Judith and Holofernes.

Palazzo Pitti (Pitti Palace) – A former residence of the dukes of Tuscany, this enormous palace is situated on the south bank of Arno River. Including the Palatine Gallery, Gallery of Modern Art, Porcelain Museum, and Silver Museum, it is the largest museum complex in the city.

Boboli Gardens – Located behind the Pitti Palace and created by the Medici Family in the 16th century, this garden is quintessentially Italian due to many sculptures and fountains found here. An Amphitheater, Viottolone, Giardino del Cavaliere, oak trees, grottos, and garden temples are the highlights in this verdant landscape.

Ponte Vecchio – Lined with jewelry shops, it is a stone arch bridge over the Arno River. A photographer’s delight at night, this pedestrian bridge is one of the oldest in Florence. Its Vasari corridor connects the Uffizi with the Pitti Palace across the river. The Ponte Santa Trinita and the Ponte alle Grazie are two neighboring bridges.

Basilica di San Lorenzo – Originally designed by Filippo Brunelleschi in the 15th century, it is one of the oldest churches in Florence, known for its magnificent Medici Chapels. Members of the powerful Medici family are entombed here. Its Laurentian Library features an impressive selection of valuable items and historical manuscripts.

Piazzale Michelangelo – Perched atop a hill just south of the historic center, it offers a postcard-worthy panoramic view that captures the heart of Florence. As the name suggests, this square is dedicated to the Renaissance sculptor Michelangelo.

Things to Do in Florence

Get off the beaten path and saunter along the Arno River, stroll through the warren of cobblestone streets, linger in the historic literary cafes, and admire the statues in squares and facades of landmarks.

Day Trips – Look beyond the cultural canvas of Florence and take a day trip to sandy beaches of Viareggio. Enjoy camping, swimming, and fishing in Lake Bilancino, taste the best Tuscan wines in Montalcino and drive up to Fiesole to see the remnants of Etruscan walls and theater.

Inferno Tours – Take a full-day walking tour inspired by Dan Brown’s Inferno and step into a world of mysterious Robert Langdon. The tour guides you through the secret passages of the Signoria Palace, Dante’s Church, and other historical landmarks.

Arte al Sole – Enrol your kids in this day camp and make the most out of your ‘grown-up’ sightseeing tours. It’s a unique way for children to learn about this beautiful city through exciting activities in the form of nature walks, sketching, painting, craftsmanship, fine arts, and science.

Shopping – Florence is the hometown of Gucci, Roberto Cavalli, and many more fashion icons. Via de’ Tornabuoni has Gucci, Prada, Pucci, and many more designer shops. The Loggia del Mercato Nuovo (new market) and the Mercato Vecchio (old market) feature many leather stalls and souvenir shops. The Mercato Centrale, an indoor market, is an excellent choice to grab a quick bite and buy picnic supplies and gifts.

The delicious Tuscan dishes (like Bistecca alla Fiorentina, Ribollita, Minestrone, and farro soups) accompanied by velvety Chianti wine are perfect for sophisticated palates. For eating like a Florentine, try out all the gelato flavors, taste the famous Panino con Lampredotto, and devour slices of Italian pizzas. Ora d’Aria, Cibrèo, Buca Lapi, and La Cucina del Garga are some of the famous traditional restaurants.

The historical centers and museums of Florence have their charms all year round. May through September, when the city is alive with sunshine and festivals, is the ideal time to visit.

By Train – Firenze Santa Maria Novella railway station is connected to nearby cities like Pisa, Viareggio, and Bologna. It is served by both high-speed railway lines and regional lines.

By Road – The Autostrada A1 (Italian motorway) connects Florence with Pisa, Bologna, Milan, and Rome. The ATAF bus service principally runs the public transport network within the city.