Is Sicily a country? - Answers 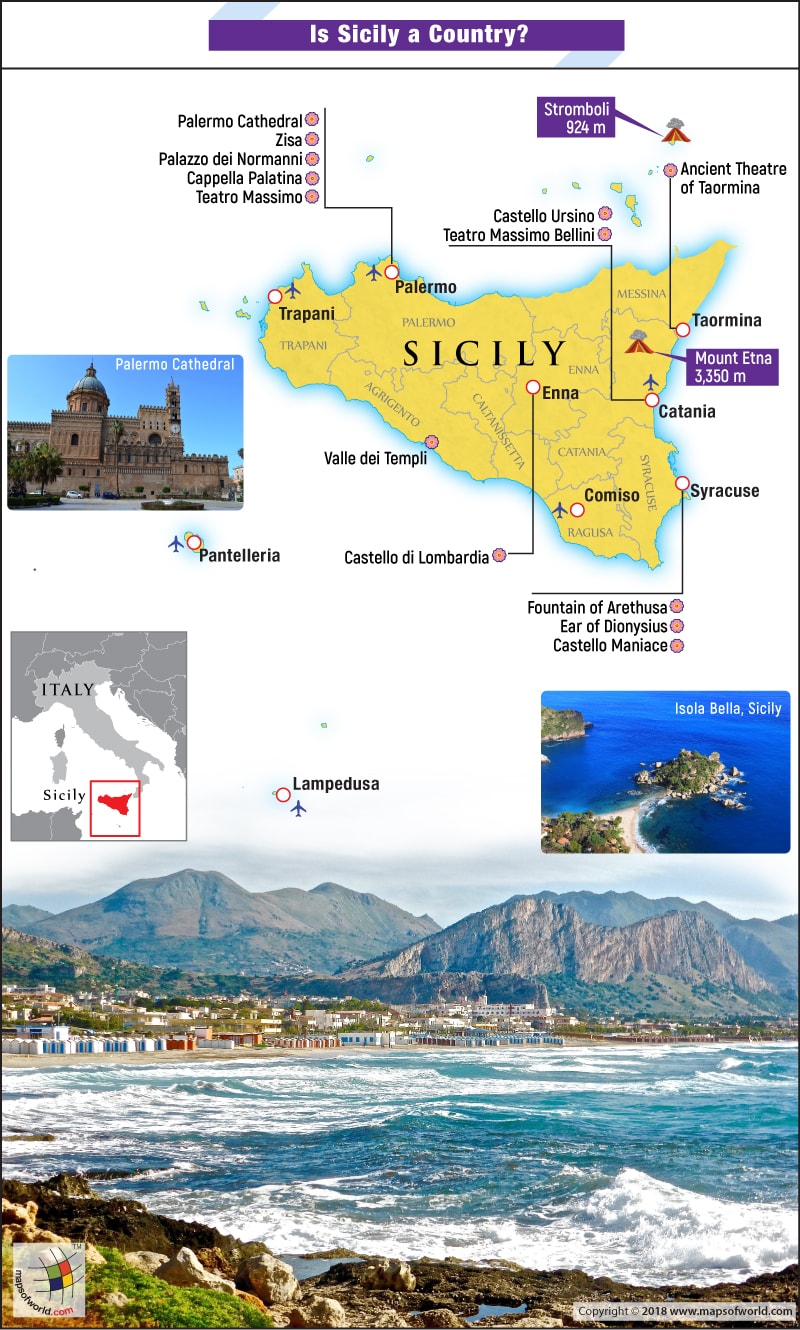 No, Sicily is not a country, but a province of Italy.

Unification of Sicily with Italy

The active movement towards unification of all states under the Kingdom of Italy came to be known as Risorgimento or the Resurgence. The process began in Sicily on May 11th, 1860, with the arrival of Giuseppe Garibaldi, an Italian revolutionary who strongly believed in Risorgimento. Sailing into Marsala on the west coast of Sicily along with his band of 1,000 supporters, known as the ‘Red Shirts,’ Garibaldi was warmly received by local peasants, who saw him as a liberator. Many joined him in his quest to take on the Bourbon troops.

On May 13th, Garibaldi defeated the Bourbon forces in the Battle of Calatafimi. He immediately proclaimed himself the Dictator of Sicily, under the authority of King Victor Emmanuel II, and proceeded to mount a siege of Palermo, the capital city. The defending Neapolitan Army under General Ferdinando Lanza bombarded Palermo, resulting in the city’s near destruction. Lanza was soon forced to withdraw to the mainland, ceding Sicily to Garibaldi’s control. Garibaldi was hailed a hero, and with further support coming in from the mainland, Garibaldi crossed the Strait of Messina and marched northwards on the mainland.
The Kingdom of Naples was next to fall. It was only after Victor Emmanuel II was proclaimed King of Italy in Teano, did Garibaldi withdraw to the Island of Caprera, while the new King went about completing the process of unification under the Kingdom of Italy. On March 21st, 1861, Rome was declared capital.

Sicily is the largest island in the Mediterranean Sea covering 9,926 square miles and is an autonomous region of Italy. The island is separated from mainland Italy by the Strait of Messina on the southern side of the country. The capital city is Palermo, and the island’s population is around 5 million.

Cave inscriptions found on the island go back 8,000 years, and the earliest inhabitants are believed to be the Sicani tribes who first came from the Iberian Peninsula.

Sicily is believed to have had a thriving ecosystem which has degraded over time with subsequent generations. The forest cover today is just 4%.

Sicily is divided into nine provinces:

The economy is sustained by financial services, real estate, industry, tourism, and agriculture but lags behind other regions of Italy regarding GDP. In 2017, Sicily’s GDP was $1,07.33B (€87,383m), contributing 5.3% to the national GDP.

The sector-wise share of major contributors to the local economy is as below:

To boost the economy, the government has initiated a drive to promote innovation in new areas like Smart cities and communities, life sciences, energy, robotics and advanced manufacturing, digitization, IT, agrifood, tourism and cultural-related activities, and the sea economy.

With its long history of rich cultural traditions, Sicily offers a diverse range of options for all types of visitors. Although the island remains attractive throughout the year, a good time to visit is during one of the many popular festivals held – Misterbianco, Acireale, Paterno, Termini Imerese, Regalbuto, and Sciacca.

Mount Etna, is one of the three active volcanoes in Italy and the largest. Located on the east coast of Sicily, towering over the city of Catania, Etna has been designated a UNESCO World Heritage Site and is a major draw for tourists. There are two popular ski resorts on Etna and visiting close to the crater’s rim is possible via road and cable car.

Other attractions in Sicily are a wide range of local cuisines and wines. Several events are held through the year celebrating their culinary evolution. Besides food, wine, and historical buildings, there are several ancient coastal towers along the Sicilian coastline worth visiting. Some of them are: