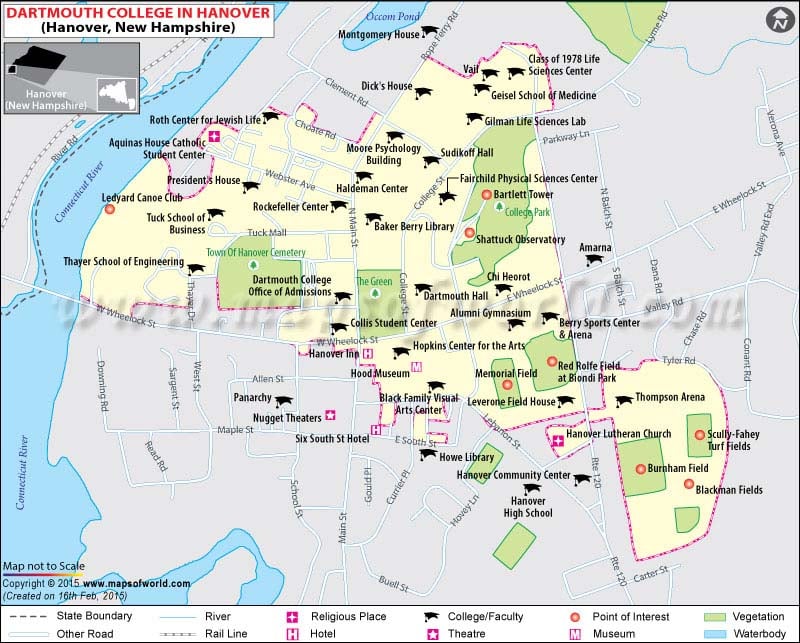 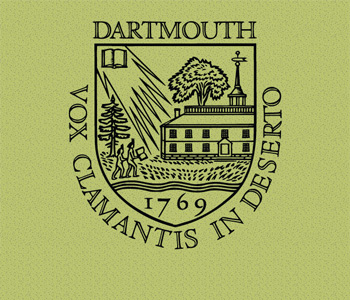 In a Nutshell
Dartmouth College, the smallest school in the Ivy League, is a private liberal arts university located in Hanover, New Hampshire. Dartmouth’s undergraduate population numbers about 4,200 students while the graduate programs have about 1,900 students, for a total student population of about 6,100. While Dartmouth’s major focus is on its undergraduate programs, it is still considered a university with a very high level of research activity, having made breakthrough discoveries in its state-of-the-art research facilities.

Dartmouth’s variety of undergraduate departments offer more than fifty majors, divided into programs for the humanities, sciences, social sciences, and interdisciplinary studies. Undergraduate students can follow paths toward earning a Bachelor of Arts or a Bachelor of Engineering. Dartmouth’s academic calendar follows a quarter system, made up of ten week terms.

Dartmouth’s history dates back to before the American Revolution, when the region consisted of British colonies. Eleazar Wheelock first founded a school for the education of Native American youth, which he called Moor’s Indian Charity School in 1755. He created Dartmouth College in Hanover, New Hampshire while expanding this school, and it was chartered in 1769. In 1819, the state of New Hampshire attempted to make Dartmouth a public university, rather than a private one, but in a landmark decision, the Supreme Court decided to allow the school to continue to conduct the university as its charter dictated.

Dartmouth is a tough university to get into, with an admissions rate of around 10 percent, and 90 percent of students coming from the top 10 percent of their high school classes. The undergraduate college offers fifty-seven majors and programs for students to choose between. The most popular majors at Dartmouth are Economics, Government, Psychological and Brain Sciences, History, Biology, English, Engineering Sciences

Dartmouth has nineteen graduate programs in the arts and sciences in addition to its three professional schools: Dartmouth Medical School, Thayer School of Engineering, and the Tuck School of Business.

Undergraduate students at Dartmouth have many opportunities to study away from the school’s main campus in a variety of off-campus programs. Freshmen and seniors are required to study on campus for fall, winter, and spring quarters, but sophomores and juniors are free to study at one of the other options. Sophomores are also required to remain on campus to spend their summers taking courses during summer term. Dartmouth offers forty-five study abroad programs in twenty countries, as well as off-campus programs in other cities around the United States. In total, about two-thirds of students participate in the study abroad or off-campus programs, making Dartmouth the top Ivy League university in this regard.

Bang For Your Buck
Dartmouth’s admission process is need-blind, with a pledge to match 100 percent of tuition that a student is not able to afford. Tuition at Dartmouth runs at about $42,000, plus about $13,000 for room and board, coming to a grand total of about $55,000. About 50 percent of undergraduate students receive financial aid from Dartmouth, and the average scholarship award is about $36,000. In an attempt to reduce the number of students graduating with loans, Dartmouth temporarily replaced student loans with grants and scholarships, but the system turned out to be unsustainable and they reverted back to a financial aid method that includes loans.

Social Scene
The rural, somewhat isolated campus has helped create a tight-knit college community at Dartmouth. There are nine residential communities on campus, each with its own specialized clusters within. About 90 percent of undergraduate students live on campus in residence halls, fraternities and sororities, and various undergraduate societies. The Greek system at Dartmouth is particularly active, with fifteen fraternities and eight sororities, in addition to a few other Greek affiliated organizations.

About 350 student organizations are part of Dartmouth’s social scene, including activist and community service groups, academic groups, performing arts organizations like singing, dancing, and theater, and religious and spiritual groups.

Students at Dartmouth are somewhat diverse, with minority students making up around 30 percent of its students and about 8 percent of the students coming to Dartmouth as international students. Dartmouth students represent all fifty states as well as fifty-three countries.

Sports are an important part of the culture of Dartmouth, with thirty-four intercollegiate varsity sports in addition to intramural and club sports, and the majority of students participate in one or more of these activities. Dartmouth has top ranked teams in men’s soccer, women’s basketball and both men and women’s hockey teams.

Where is Dartmouth College in Hanover

Dartmouth is located in Hanover, New Hampshire, which borders Vermont on the Connecticut River, surrounded by the White Mountains. Hanover is a tiny town with a population of only 11,000 inhabitants. The Appalachian Mountains run right through campus, providing an abundance of hiking trails and outdoor activities to students, as well as a beautiful setting.

The campus itself is designed with Georgian American colonial style architecture. The center of campus is a large lawn area known as the Green, which is surrounded by academic buildings. Nine libraries are located on the Dartmouth campus, which contain over two million volumes.

Why Dartmouth Makes Our List
Dartmouth is an Ivy League university in a very different setting, situated in a rural part of New Hampshire, rather than the larger cities that host the other Ivy League schools. With its focus on both undergraduate programs and research, Dartmouth students benefit from the strong academic programs and research opportunities. Dartmouth consistently ranks near the top of lists of universities for a variety of reasons, and does pledge to help students afford their education.